Join us for an online book launch of Jim Harrison: Complete Poems

“This robust volume is [a] landmark collection.”―Booklist, starred review.

You can make an enduring investment in The Heart’s Work: Jim Harrison’s Poetic Legacy by supporting the publication and promotion of our most recent title, Jim Harrison: Complete Poems—a gorgeous tour de force that contains every poem Jim published, as well as a selection of previously unpublished “Last Poems.” Early praise includes starred reviews from Booklist and Library Journal, and The New York Journal of Books proclaimed:

“This densely rich book…places Harrison among the pantheon of our best American poets.”

As a nonprofit publisher, we rely on philanthropic support from donors to help publish and promote our books. We invite you to make a donation in support of The Heart’s Work and receive Jim Harrison: Complete Poems in one or both of these formats:

These productions are classically designed hardbacks, printed on acid-free paper and smyth-sewn, with cover art by Russell Chatham.

In addition, each of the four volumes contains an introduction from a renowned writer or literary critic, including:

As Joy Williams writes in the introduction to Volume 2: “I’ve always loved Jim Harrison’s poetry—so full of itself, so direct and hungry and angered and awed. I think of him in many ways as a religious poet…he felt that only in poetry had he found ‘the right pen’ to write what he wanted to say.”

As we continue The Heart’s Work, we are deeply grateful for donations from readers who love Jim’s work and want to see his poems find a new generation of readers. You can join this group of supporters and enjoy some of the rewards listed below.

$1+: Our gratitude for your support of The Heart’s Work

$100+: Complete Poems plus your choice of an “Uncorrected Proof” or Collected Ghazals 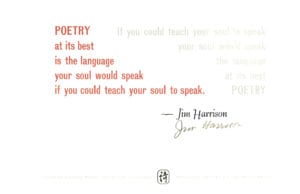 Our goal is to gather together 1,000 donors in support of Jim Harrison’s poetic legacy. You can help spread the word by:

In the late 1990s, Jim Harrison signed his first contract with Copper Canyon Press to publish The Shape of the Journey: New and Collected Poems. From that moment on, Copper Canyon served as Jim’s exclusive poetry publisher, and over the next two decades released five more books of Jim’s original poetry, as well as numerous letterpress broadsides, signed limited editions, and a re-issue of the classic Letters to Yesenin.

As a literary icon, Jim could have published anywhere. He chose Copper Canyon because he was deeply committed to small independent publishers. And for his poetry especially—his “heart’s work,” as he called it—he valued our heightened attentiveness to design, production, and editing. Most importantly, he wanted his poetry books to stay in print. We assured him that we would never remainder any of his books, and we have kept good on that promise.

When Jim died in 2016, Copper Canyon became the steward of his poetic legacy. With the blessings of the James T. Harrison Estate, we launched an ambitious multi-phased program called “The Heart’s Work,” with the goals to: