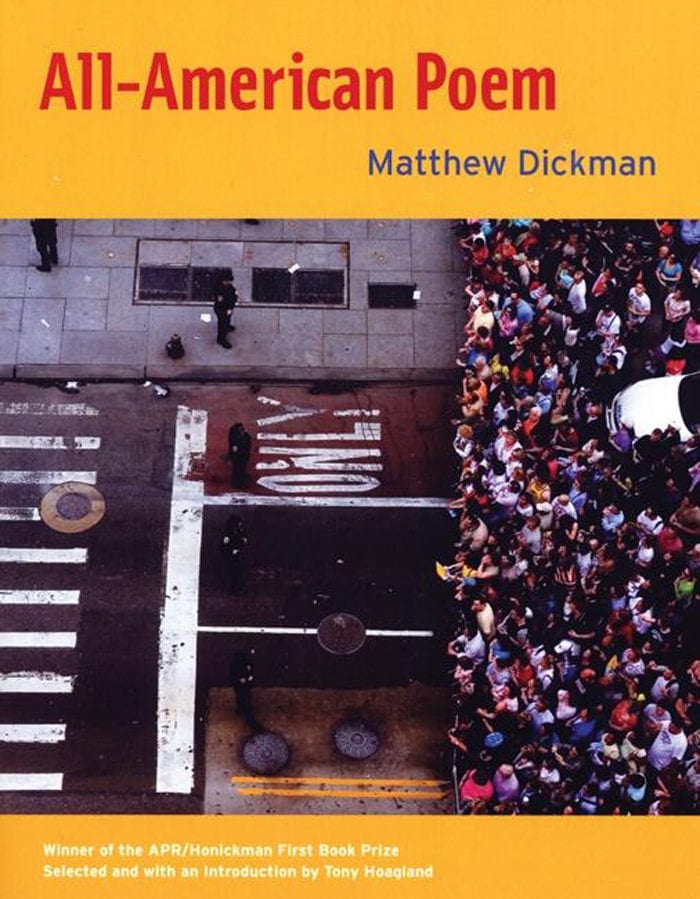 All-American Poem plumbs the ecstatic nature of our daily lives. In these unhermetic poems, pop culture and the sacred go hand in hand. Some of the poems embrace the great hopefulness of community while others are about the sorrow of being alone. Most of all, it’s a book of gratitude and praise for the complexity of being human. All-American Poem was selected for the APR/Honickman First Book Award by Tony Hoagland, who wrote, “Matthew Dickman’s all-American poems are the epitome of the pleasure principle; as clever as they are, they refuse to have ulterior intellectual pretensions; really, I think, they are spiritual in character… We turn loose such poets into our culture so that they can provoke the rest of us into saying everything on our minds. They use the bribery of imagination to convince us of the benefits of liberty.”

The produce in New York is really just produce, oranges
and cabbage, celery and beets, pomegranates
with their hundred seeds, carrots and honey,
walnuts and thirteen varieties of apples.
On Monday morning I will walk down
to the market with my heart inside me, mysterious,
something I will never get to hold
in my hands, something I will never understand.
Not like the apricots and potatoes, the albino
asparagus wrapped in damp paper towels, their tips
like the spark of a match, the bunches of daisies, almost more
a weed than a flower, the clementine,
the sausage links and chicken hung
in the window, facing the street where my heart is president
of the Association for Random Desire, a series
of complex yeas and nays,
where I pick up the plantain, the ginger root, the sprig
of cilantro that makes me human, makes me
a citizen with the right to vote, to bear arms, the right
to assemble and fall in love.

Matthew Dickman is the author of Wonderland (Norton, 2018) as well as the collections All-American Poem (APR/Copper Canyon, 2008); 50 American Plays, co-written with his twin brother, Michael Dickman, (Copper Canyon, 2012); Mayakovsky’s Revolver (Norton, 2012); Wish You Were Here (Spork Press, 2013); 24 Hours (One Star Press, 2014); and Brother (Faber & Faber, 2016). He is the recipient of the Sarton Award from the American Academy of Arts and Sciences, the Kate Tufts Award from Claremont College, and a … 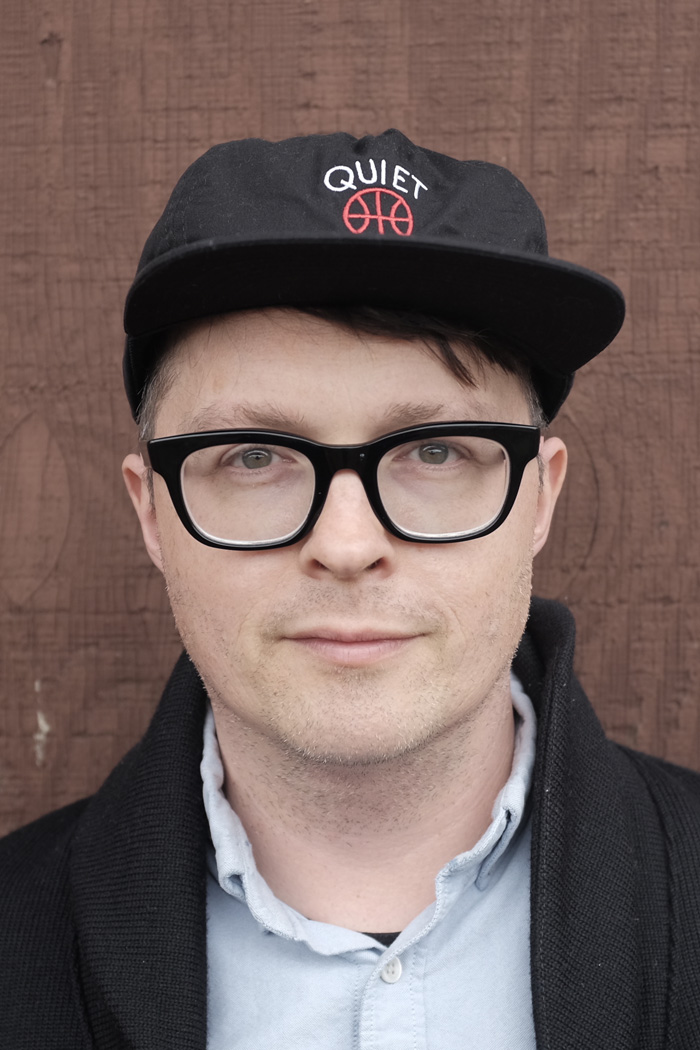 “Matthew Dickman’s all-American poems are the epitome of the pleasure principle; as clever as they are, they refuse to have ulterior intellectual pretensions; really, I think, they are spiritual in character-free and easy and unself-conscious, lusty, full of sensuous aspiration… We turn loose such poets into our culture so that they can provoke the rest of us into saying everything on our minds.” —Tony Hoagland, APR/Honickman First Book Prize judge

“If Fred Astaire was up and around again and dancing with a humming Frank O’Hara across the dear and broken landscapes of our lives, the sound of their steps, through the late spring afternoon, might have some of the sweetness of these poems. But these poems are sweeter than even that—and so bursting with knowledge and love they make me want to get up and dance myself… I didn’t know how much I needed this book until I read it. Now I carry it with me wherever I go.” —Marie Howe

“Matthew Dickman’s authority is that of the native: unwavering and resolute. But it is his artfulness and large spirit, telescoping without sentimentality the single outlook of a speaker who has escaped and now looks back, as bluesy as such projects go, that gives his poems a universality of feeling, an expressive lyricism of reflection, and a heart-rending allure.” —Major Jackson

“These poems swing with verve and luminosity. They take no prisoners. They make friends with our citizen souls. Ravenous for life, for love, for forgiveness, these are prayers made on a playground when one boy hits another, on a dance floor where a man waltzes with his brother and steps on his foot knowing ‘one will die first and the other will suffer,’ but dancing anyway, on and on, until every light in America blinks out.” —Dorianne Laux

“Dickman crystallizes and celebrates human contact, reminding us… that our best memories, those most worth holding on to, those that might save us, will be memories of love… The background, then, is a downbeat America resolutely of the moment; the style, though, looks back to the singing free verse of Walt Whitman and Frank O’Hara… [Dickman’s] work sings with all the crazy verve of the West.” —Los Angeles Times

“Toughness with a smile… [Dickman] breathes the air of Whitman, Kerouac, O’Hara, and Koch, each of whom pushed against the grain of what poetry and writing was supposed to be in their times.” —New Haven Review