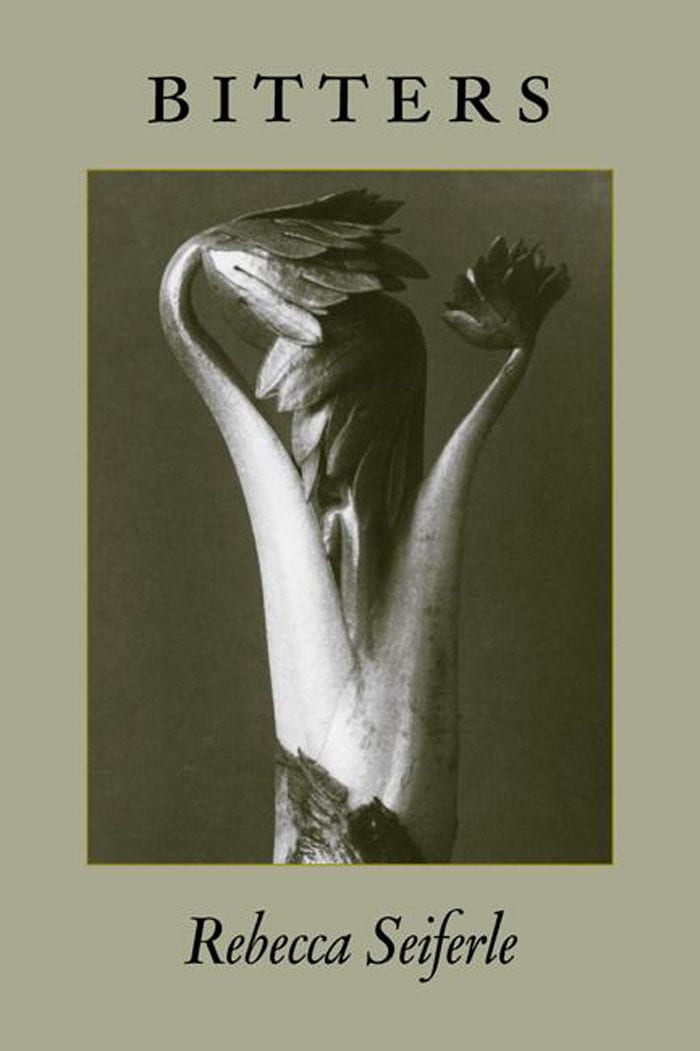 Bitters is an extended argument with God, driven by the desire to recover what is banished to the marginal and apocryphal. The sonnets (or near-sonnets) of this collection continue the metaphysical meditation which began as an elegy for the poet’s father, but Seiferle takes the meditation deeper. “Bitters was written in an uncharacteristic rush of energy,” Seiferle notes, “almost furiously within a few months. The rigor of the sonnet form provided a container for what might have remained unsayable.”

Pyrus Malus— an evil fire?— burning
in the branches, perhaps, of a primitive
species of crab-apple, cultivated
in all temperate zones into so many
varieties: the apple of discord
awarded to the fairest (in beauty
not justice) who caused the burning of Troy,
the apple of Sodom that Josephus
claimed dissolved into smoke and ashes
when grasped by a traveler’s hand,
Adam’s apple, the apple of love,
the apple of the eye, the Apple John
said to be perfect only when shriveled,
any number of erroneous fruits, any
disappointing thing. “Faith (as you say)
there’s small choice in rotten apples” or
“Feed an enemy the skin of a peach,
a friend the skin of an apple.” But tree
of knowledge or morning snack, you can have
the gala skin, the blush of the apple,
even the white succulent flesh, if you save
me the core— that earthly constellation
usually tossed to horses or thrown away.
I’ll be with the gypsies who cut to the star
of seeds at the heart of each orb, for
it’s the core I want— intensely apple,
medicinal with a dash of arsenic, the zing
of earth, the crisp bite of becoming.

Rebecca Seiferle was awarded a Lannan Literary Fellowship in 2004. She has translated two poery collections from the Spanish by César Vallejo, most recently The Black Heralds (Copper Canyon, 2003). Her translations have been included in several anthologies. Her own work has been included in over twenty-five anthologies and has been translated into Italian, Spanish, Lithuanian, and Latvian. She has been a poet-in-residence at Brandeis University and has taught in the Stonecoast MFA Program, the Port Townsend Writers Conference, the …

“Throughout Bitters, Seiferle maintains a quality of inquiry, philosophic intrigue, and poetic discovery. She leaps and always lands on her feet, gracefully. What a find to come upon these stunning poems of this metaphysical poet making extraordinary sense at the edge of the world in Farmington, New Mexico.” —Judges’ citation, Western States Book Award for Translation

“There is nothing distasteful about Rebecca Seiferle’s newest poetry collection Bitters. Where the ale known as bitters is dark and strong, the 77 poems in this book are revealing and soothing.” —Home News Tribune

“Part of what Seiferle uses poetry for is to make the ordinary magical, to imbue events with a sense of transcendence.” —New Mexican