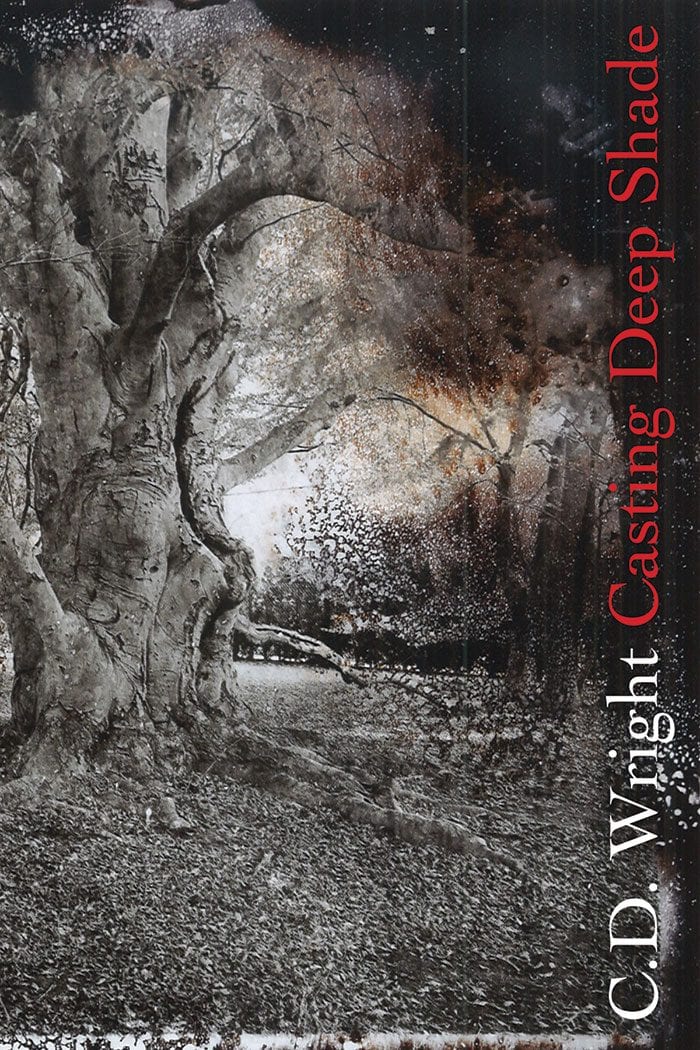 Casting Deep Shade is a passionate, poetic exploration of humanity’s shared history with the beech tree. Before Wright’s unexpected death in 2016, she was deeply engaged in years of ambling research to better know this tree—she visited hundreds of beech trees, interviewed arborists, and delved into the etymology, folk lore, and American history of the species. Written in Wright’s singular prosimetric style, this “memoir with beech trees” demonstrates the power of words to conserve, preserve, and bear witness. Honoring Wright’s lifelong fascination with books as objects, this final work is a three-panel hardcover that encloses the body of text, illustrated with striking color photographs of beech trees by artist Denny Moers.

For its carving, a witness tree:

I think of a witness tree as one that stood its ground, when something happened,
possibly something no human was meant to see. I think of the Pacific yew in
Warren, RI, brought over on one of Commodore Perry’s black ships by the
botanists Rev. Samuel Williams and Dr. James Morrow. In 1978 a murder took
place in the severe old house on Miller Street with its side-yard yew. Midday, the
victim, owner of the emporium, House of a Million Items, was in the shower.
Ten shots to the abdomen and the temple. That’s hatred. Cold and bloody.

(The bark of the Pacific yew [Taxus brevifolia] was discovered to be the
natural source of paclitaxel [Taxol], but the cancer-fighting compound
required 2 tons of bark to yield 10 pure grams. Eventually a “blockbuster”
synthetic was developed in lieu of yew bark.)

A probable, never-charged patricide. A botched investigation, contaminated
evidence, a cover-up, and so forth. When I pass the house, I see the yew long
risen past the window on the second floor I picture being the site of the attack
on a naked, nearsighted man.

Witness tree, graffiti tree, tattoo tree, autograph tree, trysting tree, avenue tree,
arborglyph, CMT (culturally modified tree), Presidents’ Tree (for the one in
Takoma Park carved with presidents from Washington to Lincoln in 1865; blown
down in 1997). They say it really doesn’t hurt the tree, all that carving. But harm
and hurt are different. Beech bark is a tender thing.

“… [Casting Deep Shade] begins as a loving naturalist’s ode to the beech tree and branches out to touch a dizzying array of international, transhistorical topics, not least among them what it means to be alive. Fans of Wright will find what they’re looking for in this collection…” —Publishers Weekly

“… a physical as well as lyrical work of art.” ―Brooklyn Rail

“Wright has found a way to wed fragments of an iconic America to a luminously strange idiom, eerie as a tin whistle.” ―New Yorker

“C.D. Wright has been writing some of the greatest poetry-cum-prose you can find in American literature.” ―Dave Eggers

“For me C.D. Wright’s poetry is river gold.” ―Michael Ondaatje

“CD Wright’s is a poetry of Southern mountain vision brought to the streets in a language of brilliant synaesthesia, colloquial warmth and laconic wit… a saxophone playing and a poignant voice making sense.” ―Carolyn Forché

“This is poetry as white phosphorus, written with merciless love and depthless anger… how can we react to a poetry this alive with invention and purpose but with joy?” ―Judges’ citation, Griffin Poetry Prize, 2009

“Expertly elliptical phrasings, and an uncounterfeitable, generous feel for real people, bodies and places, have lately made Wright one of America’s oddest, best and most appealing poets.” ―Publishers Weekly

“No single description adequately captures Wright’s work; she is an experimental writer, a Southern writer and a socially committed writer, yet she continuously reinvents herself with each new volume.” ―MacArthur Foundation