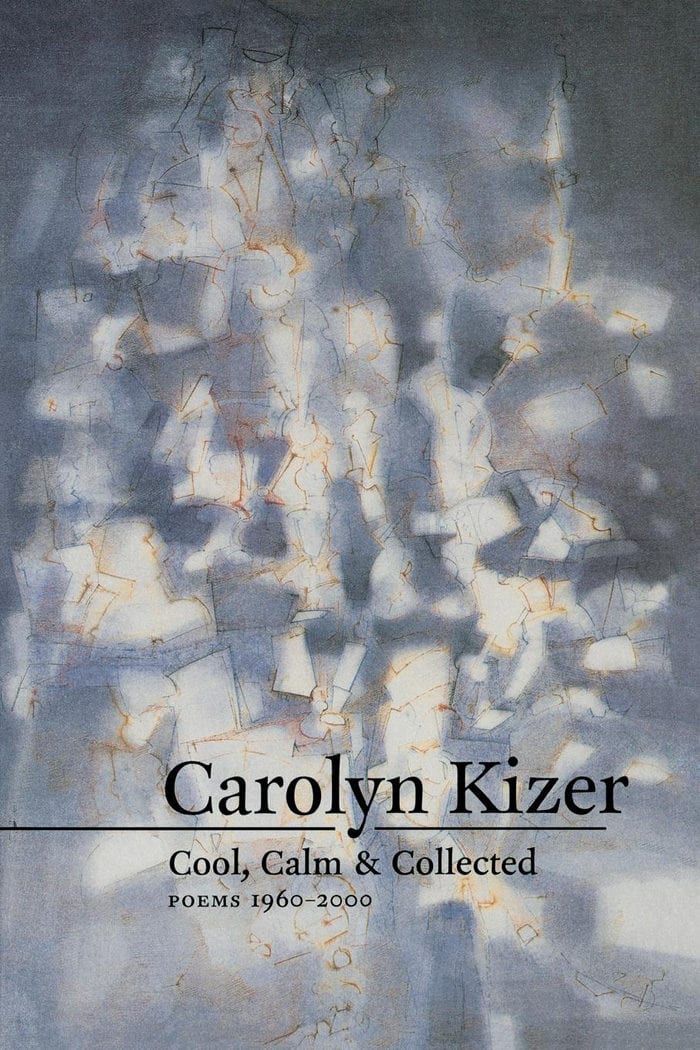 Selected as a “Best Book of the Year” by the Los Angeles Times and Booklist magazine, and winner of the Independent Publisher Book Award, Cool, Calm & Collected is a tour de force from one of the nation’s premier poets. For four decades, Carolyn Kizer has been one of the most influential, controversial, and recognizable figures in American poetry. Kizer has never been afraid to say what is on her mind, writing poems infused with sexual politics, social awareness, and literary irreverence. Cool, Calm & Collected features new poems, work from all of Kizer’s previous volumes, translations “from a dizzying number of poets” (New York Times), and several prose pieces, including “Pakistan Journal” and “My Good Father.”

Now, when he and I meet, after all these years,
I say to the bitch inside me, don’t start growling.
He isn’t a trespasser anymore,
Just an old acquaintance tipping his hat.
My voice says, “Nice to see you,”
As the bitch starts to bark hysterically.
He isn’t an enemy now,
Where are your manners, I say, as I say,
“How are the children? They must be growing up.”
At a kind word from him, a look like the old days,
The bitch changes her tone: she begins to whimper.
She wants to snuggle up to him, to cringe.
Down, girl! Keep your distance
Or I’ll give you a taste of the choke-chain.
“Fine, I’m just fine,” I tell him.
She slobbers and grovels.
After all, I am her mistress. She is basically loyal.
It’s just that she remembers how she came running
Each evening, when she heard his step;
How she lay at his feet and looked up adoringly
Though he was absorbed in his paper;
Or, bored with her devotion, ordered her to the kitchen
Until he was ready to play.
But the small careless kindnesses
When he’d had a good day, or a couple of drinks,
Come back to her now, seem more important
Than the casual cruelties, the ultimate dismissal.
“It’s nice to know you are doing so well,” I say.
He couldn’t have taken you with him;
You were too demonstrative, too clumsy,
Not like the well-groomed pets of his new friends.
“Give my regards to your wife,” I say. You gag
As I drag you off by the scruff,
Saying, “Good-bye! Good-bye! Nice to have seen you again.”

Carolyn Kizer, winner of the Pulitzer Prize for Poetry, was educated at Sarah Lawrence College and was a fellow of the Chinese Government in Comparative Literature at Columbia University. In 1959, she co-founded Poetry Northwest and was its editor until 1965. She served as the first director of the Literature Program at the National Endowment for the Arts (1966–1970), was a chancellor of the Academy of American Poets, and served as poet-in-residence at Columbia, Stanford, and Princeton. She died in … 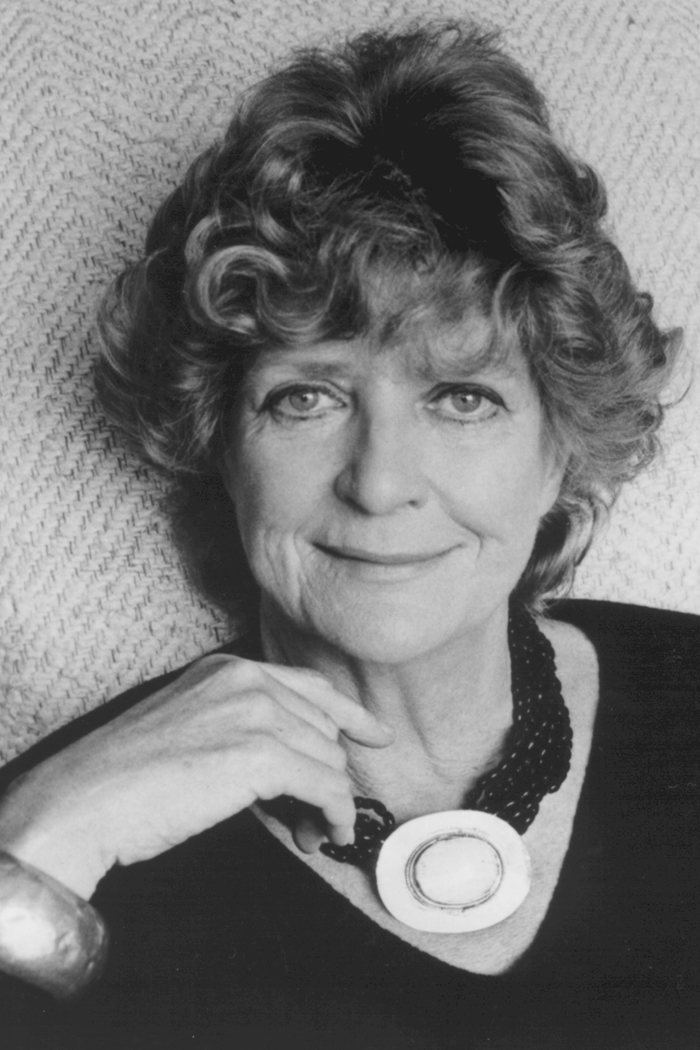 “Kizer’s passionate, witty poetry has graced American letters for four decades, and like a championship rose it has been lovely in every period: from the tight, bud-like formal early work down to the big, blowsy poems of recent times… The stately power of her verse has never failed her.” —Booklist, starred review

“We have no finer poet writing today, and very few her equal.” —San Francisco Review of Books

“One of the best poets around… a national treasure.” —San Francisco Chronicle

“As books of poetry go, this one is a treasure.” —J. Wallace Bastian, from a “Reader Comment” card

“In this book, the reader can follow a major poet’s chronology of development, from early rigidly structured poems on academic subjects to recent loosely structured poems on the immediacy of current events. Kizer’s concerns–eros, history, women, poetry–surface in all eras of her work, as well as in her selection of work to translate from the Chinese, Yiddish, Urdu, French, and German.” —Judges’ citation, Washington State Book Award

“I believe Copper Canyon Press is one of the premier poetry publishing companies in the world, period. As evidence of this assertion, one only has to secure a copy of Cool, Calm & Collected. Carolyn Kizer is a Pulitzer Prize-winning poet who has for four decades written in a personal, humanistic manner that is powerful, witty, compassionate and a joy to read.” —Tulsa World

“Kizer looks at the world without eyelids; nothing is too small or too public for scrutiny… While she is complex both in style and themes, she is always accessible… Irony and humor abound… Kizer’s energy, zest, and intelligence will knock your socks off.” —American Book Review

“I can’t think of many volumes of collected poems that begin as strongly as this one… When Kizer is energized by enough wrath to move into the invective mode… she is well-nigh irresistible.” —Hudson Review

“[Carolyn Kizer] was a feminist practically before the term existed, and she has consistently spoken out against injustice both in her work and in her life. As a result, Cool, Calm & Collected provides an opportunity to look back not only at her career, but at the recent social and political history of America… Despite her constant railing against the machine, however, Kizer’s poetry remains fundamentally optimistic, perhaps because she seems to love existence almost in spite of herself.” —New York Times Book Review

“Carolyn Kizer has been publishing celebrated feminist poetry since the 1950’s. Her poems are knowing, detached and gracious… Kizer’s tones…[are] rich, dense and deft… Kizer’s depth, artistry and accomplishment shine on every page of [Cool, Calm & Collected]. You can see her mastery easily.” —Women’s Review of Books

“Carolyn Kizer is a kind of institution… For over 40 years, she’s made poems with a stern work ethic of literary thought and linguistic scrupulousness. They’re contemporary poems with an old-world aura. At dinner, they’d appear in black pants and a pearl necklace.” —San Francisco Chronicle

“[Carolyn Kizer’s] got a predatory intellect and the guts to back it up… Kizer can also effortlessly change voice to recreate a solemn incantation from Urdu. Anything this poet puts her mind to is powerful stuff.” —Seattle Times

“Though this book is, without question, a sizable ‘collection,’ it seems hardly cool or calm. What one feels, looking over the poems and translations spanning 40 years of this distinguished poet’s life, are larger-than-life ego, wit, passion and sass.” —Los Angeles Times

“This collection… shows Kizer to be consistently and fearlessly irreverent, using wit and irony to drive her points home… Whether because or in spite of her aplomb, Kizer’s poetic voice is one of the most engagingly warm human voices we have, and it would be a mistake to take this enormous, if hard to define, feat for granted… [Kizer] plumbs the past in light of the present, always alert to life’s synchronicities.” —Antioch Review

“Kizer’s four decades of work demonstrate a highly skilled and witty formal poet who yet has been an avantgardist thematically.” —Booklist

“[Kizer’s] poems engage politics—and also, of course, friendship, love, parenting and aging—directly, immediately and in complicated ways… Kizer continually gives us the sense that we are in the presence of wit as Samual Johnson defined it (the ‘constant presence of critical intelligence’)… Whether her poems are social critiques or letters and gifts… whether they are sharpwitted, heartbreaking, playful or furious; whether they exploit a conceit, exact revenge or rewrite myth, they remind us of how good poets make our language new—in relation to, out of, and even in spite of, human experience… Cool, Calm & Collected is a hopeful book despite the violent century it takes as subject matter.” —Kansas City Star

“[Kizer] is a remarkable and very accessible poet and this large collection should win a wide audience… Kizer is one of the few remaining political poets; she continues to write in the 1930’s leftist mode well into the early twenty-first century.” —Magill’s Literary Annual

“It is [Carolyn Kizer’s] internal discipline that secretly explains a part of her success and long-standing, continuing appeal: even where her message astounds or incites, the reader is inclined to trust where the architecture is solid.” —Book Review

“Carolyn Kizer brings poetry right up off the page into our lives.” —Spokane Spokesman-Review

“Though diverse, [Kizer’s] poems live mostly through their feeling, in moments of intensity or reflectiveness. Many mediate among the needs of family, art and love, or between memory and the present. Her rhythms are strong; her language erudite or sensual or both.” —Seattle Times

“Tough without being cold, sometimes satirical… [Kizer’s] work expresses a worldly largeness that repeatedly focuses on the point at which lives meet.” —Los Angeles Times

“One of the most heartful, dramatic, and also humorous of American poets.” —Poetry Flash

“Carolyn’s poetry is various and brilliant… Her work delights me.” —Hayden Carruth