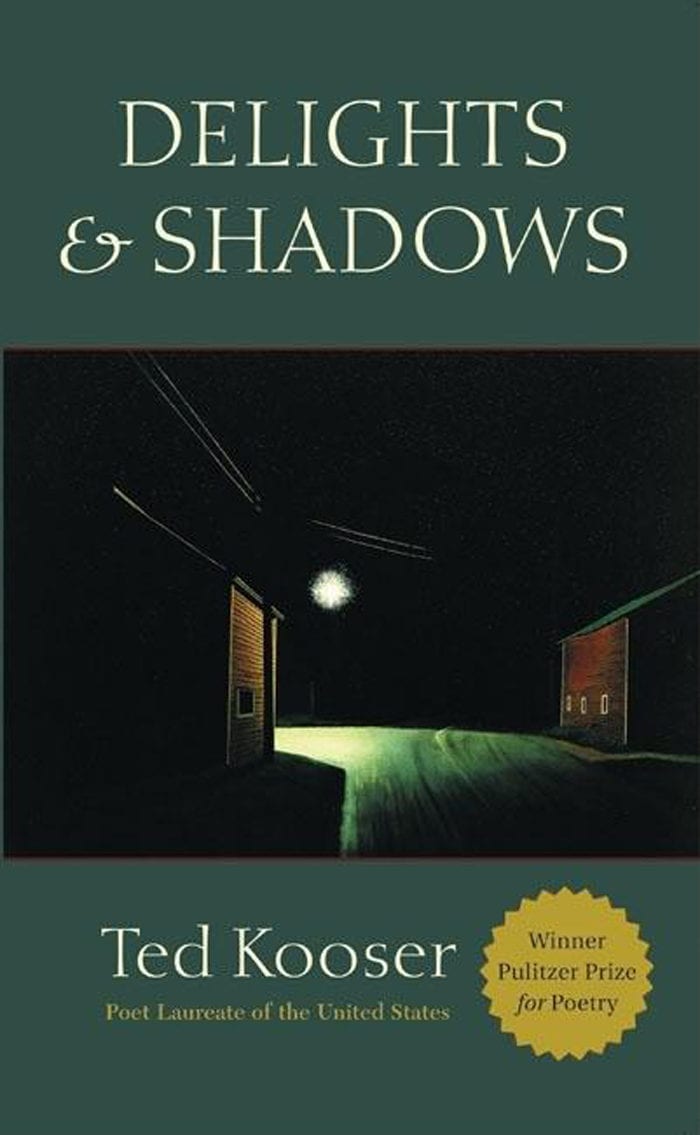 Winner of the Pulitzer Prize, Delights & Shadows is proof positive that poetry need not be forbidding, difficult, or intentionally obscure. Ted Kooser draws inspiration from the overlooked details of daily life–a pegboard, creamed corn, and a forgotten salesman’s trophy help reveal the remarkable in what can sometimes appear to be an ordinary world. Here is a poet who works toward clarity and accessibility so that each distinctive poem appears as fresh, bright, and spontaneous as a good watercolor painting. Kooser is a haiku-like imagist with aching wisdom infusing his poems.

Today, from a distance, I saw you
walking away, and without a sound
the glittering face of a glacier
slid into the sea. An ancient oak
fell in the Cumberlands, holding only
a handful of leaves, and an old woman
scattering corn to her chickens looked up
for an instant. At the other side
of the galaxy, a star thirty-five times
the size of our own sun exploded
and vanished, leaving a small green spot
on the astronomer’s retina
as he stood in the great open dome
of my heart with no one to tell.

Thirteenth United States Poet Laureate (2004–2006) Ted Kooser is a retired life insurance executive who lives on acreage near the village of Garland, Nebraska, with his wife, Kathleen Rutledge. He is a visiting professor at the University of Nebraska, where he teaches poetry and nonfiction writing. His collection Delights & Shadows was awarded the Pulitzer Prize in Poetry in 2005. His poems have appeared in The Atlantic Monthly, The Hudson Review, The Antioch Review, The Kenyon Review, and dozens of … 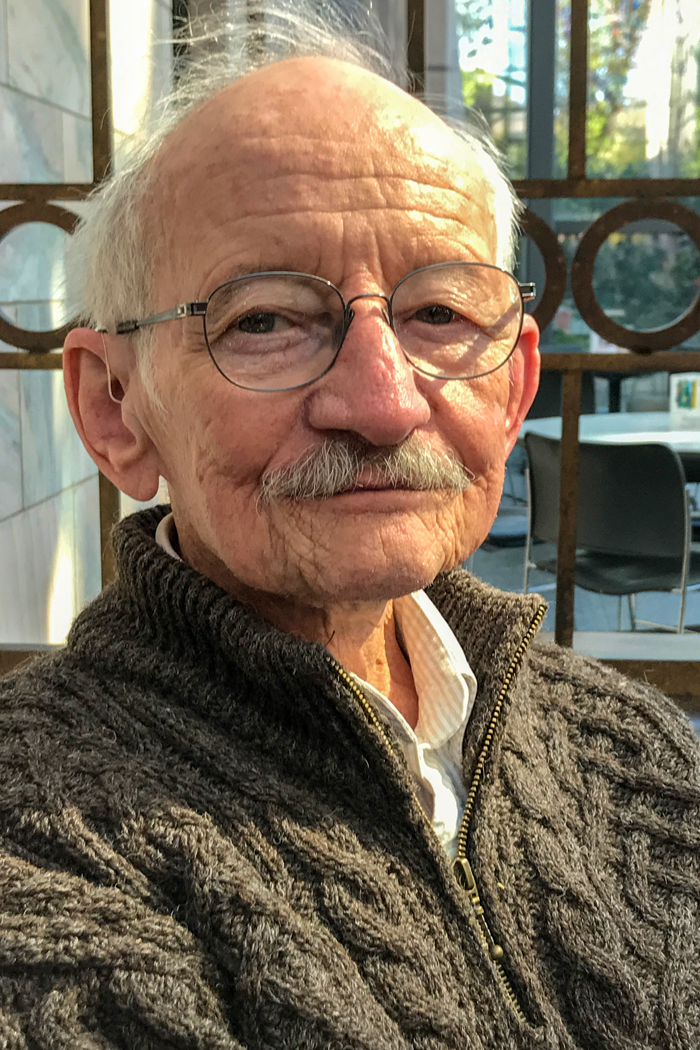 “[Kooser] brushes poems over ordinary objects, revealing metaphysical themes that way an investigator dusts for fingerprints. His language is so controlled and convincing that one can’t help but feel significant truths behind his lines.” —Philadelphia Inquirer

“There is a sense of quiet amazement at the core of all Kooser’s work, but it especially seems to animate his new collection of poems, Delights & Shadows. Every delight is shadowed by darkness in this book of small wonders and hard dualisms… It takes an epigraph from Emily Dickinson—’The Sailor cannot see the North, but knows the Needle can—but just as easily could have taken one from Wallace Stevens: ‘Death is the mother of beauty.’ Mortality is omnipresent and induces a deep attentiveness. Everyone here— a young woman in a wheelchair, a skater dressed in black, a group of mourners after a funeral, the poet himself—seems to be moving lightly over an invisible abyss. ‘There are days when the fear of death / is as ubiquitous as light. It illuminates / everything,’ he writes in ‘Surviving.’ ‘Were it not for the way you taught me to look / at the world, to see the life at play in everything,’ he writes to his mother who has been dead just one month, ‘I would have to be lonely forever.'” —Edward Hirsch, Washington Post

“Delights & Shadows is a book with a deep stillness at its center, perfectly self-contained, yet echoing like a country well. Kooser… lives in Nebraska and is a retired life insurance executive. The modesty of the background from which he draws inspiration heightens the poems’ ingratiating manner. This is a poet writing in the tradition of Thomas McGrath, without the all-defining politics—though these are poems of the Great Plains—and prairie poems carry with them (as any poet born in this part of America knows) a natural populist gravity and humor.” —Carol Muske-Dukes, Los Angeles Times

“Kooser’s ninth collection of poems reflects the simple and remarkable things of everyday life. That he often sees things we do not would be delight enough, but more amazing is exactly what he sees. Nothing escapes him; everything is illuminated. There is much to celebrate in these small-town poems about small-town people and a reminder to all of us how America’s voice and warm wisdom resonate from the middle. Highly recommended.” —Library Journal

“Few poets depict the Midwest so accurately or with such tender regard… Kooser excels at the brief, imagistic poem.” —Kansas City Star

“Kooser is careful to reject any appeal to the obvious, his technique based on several essential components, including close attention to crucial detail; a precision of language that results in striking, indelible images; and a modest but tangible vision of a cosmos beyond the poem’s specific setting.” —Magill’s Literary Annual, 2004

“Delights & Shadows raises the voice of the poet above everything else. Each short, vivid poem on the page reads as if it were being spoken aloud. Details about cemeteries, dictionaries, a doctor’s waiting room, and a jar of buttons bristle with sound and awareness. Kooser’s ability to use brief lyrics to compose a music of discovery and regeneration makes his work radiant and consuming… This is not an extended, complex or experimental kind of writing, but poetry that rings true, allowing the human sound of being to exist on the page.” —Bloomsbury Review

“Here is the gift and fragility of life.” —Wichita Eagle

“Ted Kooser’s Delights & Shadows is a quiet but beautiful song of clarity, like clear, clean water, and the taste is just as pure. Not dense, not academic, it’s accessible and lucid revealing the remarkable with the ordinary… Kooser knows just the way to form the words, to say something worth saying… Kooser’s ability to discover the smallest detail and render it remarkable is a rare gift.” —Bloomsbury Review

“Kooser is a master of the subjective description. Empathetic without sentimentality, his eye ranges over all sorts of everyday subjects and finds material everywhere… wherever the unpredictable particularity of the world can be glimpsed… Perhaps Kooser’s success lies in his determination to see the… things of this world with such clarity and passion that their underlying mysteries, delights, and shadows also become clear, if only for a moment.” —Georgia Review

“You can almost see Kooser behind the poems, watching the world like a sketch artist… These poems resemble watercolors, and there is nothing static in them… Kooser displays the same kind of fluid strokes Degas used in his ballet pictures… In one athletic sentence, Kooser… springs us from a crouch and into the sky and brings us back safely… Kooser’s works inspire voluptuous rumination. He is an exquisite miniaturist of daily life…” —Hartford Courant

“The poet finds magic in activities and objects typically considered mundane… Metaphors are the treasure of these short, imagistic poems, emphasizing the wonder and delight latent in what is often merely taken for granted.” —Harvard Review

“A sense of wonder and compassion runs through this Pulitzer Prize winning volume… Kooser’s poetry is understated yet manages to skillfully illuminate the small moments of life.” —Christian Science Monitor