Home > Books > Diaries of a Terrorist by Christopher Soto

Diaries of a Terrorist 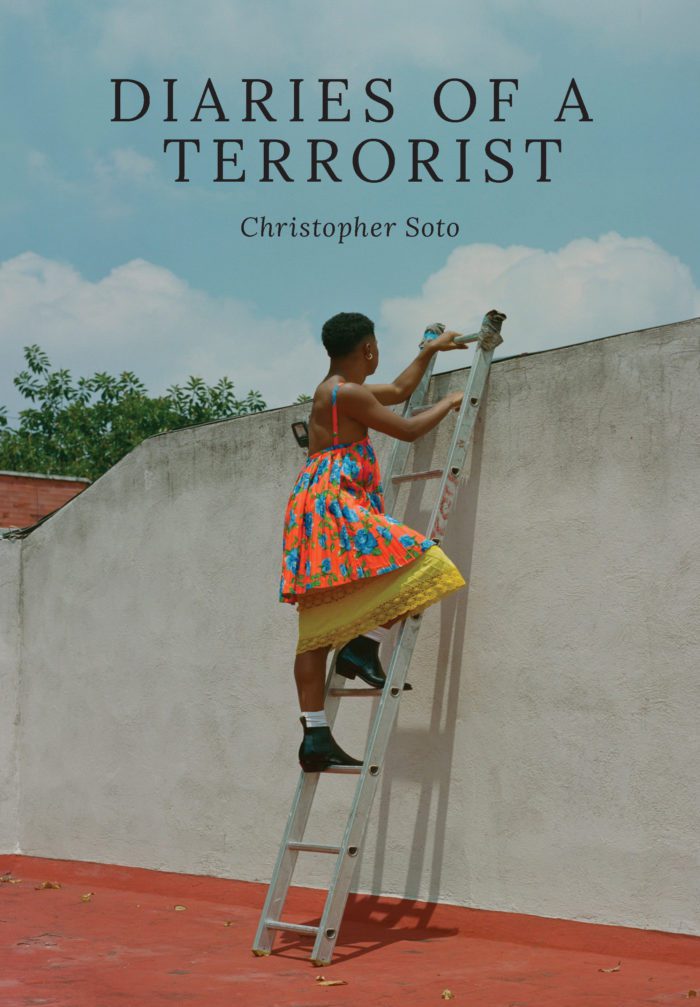 This debut poetry collection demands the abolition of policing and human caging. In Diaries of a Terrorist, Christopher Soto uses the “we” pronoun to emphasize that police violence happens not only to individuals, but to whole communities. His poetics open the imagination towards possibilities of existence beyond the status quo. Soto asks, “Who do we call terrorist, & why”? These political surrealist poems shift between gut-wrenching vulnerability, laugh-aloud humor, and unapologetic queer punk raunchiness. Diaries of a Terrorist is groundbreaking in its ability to speak—from a local to a global scale—about one of the most important issues of our time.

Teaching guides are available for Diaries of a Terrorist in the following areas of study:

If you are interested in a teaching guide, please email education@coppercanyonpress.org.

She stepped across our chest

Dragging her shadow & fraying // All the edges

We’ve seldom seen this woman cry // Squeezed like a raincloud

She howled // As the fence // Surrounded her

She coughed & combed the floor // Our chest shiv

Inside the detention center // She was renamed // Ill-egal

She forgot 15 pounds & mental health & her feet were

This border // Isn’t a stitch // Where nations meet

This border’s a wound // Where nations part

Christopher Soto is a Salvadoran poet and abolitionist based in Tovaangar (Los Angeles, California). He currently works as the Assistant Director of Development for UCLA’s Ethnic Studies Research Centers, and he also teaches at UCLA’s Honors College. He has previously taught at NYU where he received his MFA in Poetry and was a Goldwater Hospital Writing Fellow, Columbia University as a June Jordan Teaching Corp Fellow, and at Occidental College as a Visiting Assistant Professor of Creative Writing. He previously … 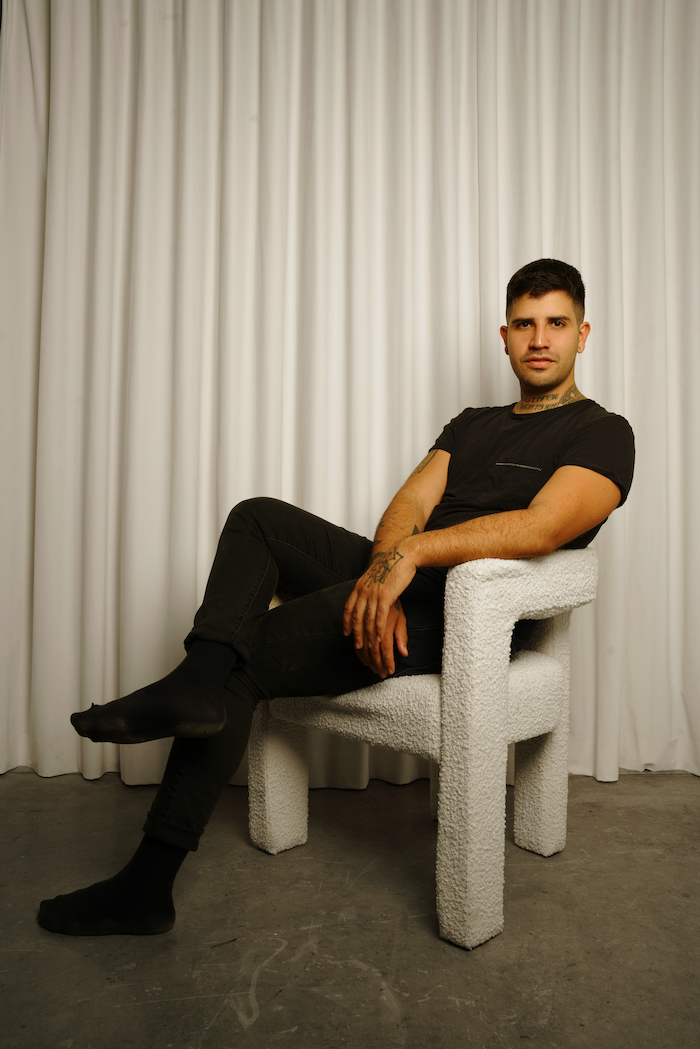 “Each work in [Sad Girl Poems] celebrates degradation. Elevates it. Consecrates it. Soto asserts brown degradation as beauty. In this respect, Soto belongs to a Latin American tradition of lyrically romanticizing abjection.” — Ploughshares

“Soto succeeds in assembling an expansive, sonorous, and literarily significant volume that reveals the broad range of engagements queer poets of color have undertaken over the years.” — Publishers Weekly

“It’s amazing to see the power that poetry can have when sharpened by the activist communities that demand it. . . . Soto’s work is an essential addition to the legacy of queer Latinx writers in Los Angeles. Not only is his individual craft poignant, but his voice echoes his people. His concern is not to get accolades for his writing, but to open the ways that society can imagine better futures. This collection of poetry is in fact a diary, but one that is produced by a communal ‘we’ instead of a solitary ‘I.'”— Los Angeles Review of Books

“In his debut collection, Christopher Soto shows vulnerability and humor to talk about some of issues affecting the world today, from queerness to identity to police violence.” — Shereads

“This is a book that will move you—rock you. Soto is unapologetic in the demands he makes of his readers. He challenges us to look closely at the damage caused to individuals, to families, and to communities by police violence and by the inhumanity of caging human beings. Soto’s collection calls upon us to feel the world as it is and to imagine alternative possibilities.” — The Rumpus

“Christopher Soto is the living embodiment of the best poetry being written in Los Angeles right now: queer, punk, pro-migrant, irrepressibly rousing and political, with a peerless ability to turn the most subdued of literary affairs into a backyard party. . . . Soto’s long-awaited debut collection, Diaries of a Terrorist, takes as its central mission the abolition of policing and human caging. Soto’s poetics of dissent is refreshingly unpretentious, and the book’s stylistically avant-garde yet highly relatable poems encompass several critical conversations within the abolitionist movement, such as youth detention, migrants at the border, trans people harassed by airport security and the incarceration of Palestinian activists. While it explicitly calls for the end of the police state, Diaries of a Terrorist also is fueled by a scarred personal history, which finds its voice in confessional poems where Soto pushes through the pain of experience to remind us that a more just world isn’t only possible but necessary—becoming a loving tribute to lives traumatized by domestic violence, for-profit incarceration and the grim realities of what it takes to get by in Los Angeles.” — Los Angeles Times

“Alongside its uncompromising portrait of injustice Diaries of a Terrorist also offers audacious glimmers of hope.”— Harriet Books, Poetry Foundation

“For Christopher Soto, abolition is personal. In the Los Angeles-based poet’s long-awaited debut poetry collection Diaries of a Terrorist, published by Copper Canyon Press, they demand it. Weaving survivor narratives, including their own, through artful stanzas, Soto’s work disrupts our conceptions of violence and safety. . . . Still, he emphasizes that the book is not meant to be an individualistic account of his own experiences, but rather a multi-faceted rallying cry that draws from multiple sources. The use of the ‘we’ pronoun throughout the collection forces the reader to confront how policing targets, maims, and destroys entire communities rather than just select individuals within them.” — THEM

“In Diaries of a Terrorist, Soto tackles policing at every level, questioning who gets called “terrorist” and what gets called “public safety.” It’s a visceral reading experience that explores Soto’s own traumas as well as the societal trauma of carceral systems. Which may sound overwhelming and sometimes is — but his poetry brings tender vulnerability and crass humor in equal measure, and his book opens up new possibilities for a better world we can all work to create together” — Cut

“[Diaries of a Terrorist] hums on the colloquial register, by turns campy, raw, and direct, inviting the reader to sit with the poet. . . . Soto adopts the pronoun ‘we’ to blur borders between his own experiences and those of others, and through it, he embodies both the communal impact of state violence and the collective resistance to it. His poem’s speakers sift through an imagined landscape of memories—incarcerated teenagers in gray rooms, the aftermath of a police shooting, the aftershocks of familial abuse. The poems are globetrotting, too, meditating on the xenophobia of security in settings from India to Palestine to the Americas. Soto roves from the intimate to the international to further reveal the ‘we,’ to show the shared condition.” — The Nation

“An activist and artist examines policing, incarceration and trauma—through poetry. In Diaries of a Terrorist, Salvadoran American Christopher Soto takes an unflinching and raw view of current systems’ impact on Latino and other communities—and imagines ‘a more just, caring, and equitable world.'”— NBC News

“[Soto’s] latest effort is about finding space to articulate both how he sees the world around him and reimagine how the world could look without those never-ending streams of violence. . . . [The] new poetry collection addresses a spectrum that weaves together stories of police violence, the AIDS epidemic, abuse, borders, immigration and customs enforcement, abolition, and more—it packs a serious punch.” — KPFA’s Up Front

“I’ve been looking forward to this debut poetry book, Diaries of a Terrorist, for quite some time. Christopher Soto is someone I think of as a poet and activist in the same breath. His taut debut poetry collection is a testament to queer defiance of policing in the United States and abroad. His activism off the page (with UCLA Cops Off Campus, Writers for Migrant Justice, and Undocupoets) has pushed back against policing, human caging, and the mistreatment of migrants. Through language, his poetry and activism share some of the same concerns: an urgency for action, a clarity of vision, and yes, a new sense of hope. If a debut poetry collection serves as an introduction of a poet to the greater literary world, Soto’s Diaries reveal a poet who is unafraid to make material of their lives in service of a call for a better world. The book soars by imagining a future through abolitionist poetry. In many ways, Soto picks up the mantle of Queer Latinx scholar José Esteban Muñoz who writes that ‘queerness exists for us as an ideology that can be distilled from the past and used to imagine a future. The future is queerness’s domain.’ For Soto, queering the future means letting poets and abolitionists lead the way.”— The Brooklyn Rail