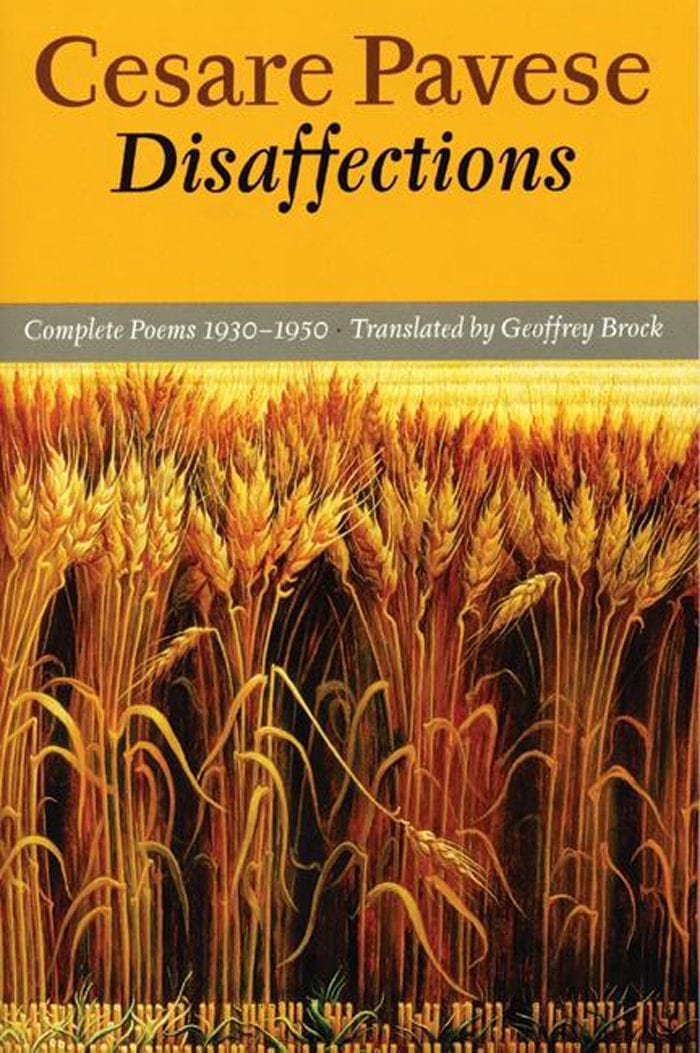 Cesare Pavese (1908-50) was one of Italy’s great post-war writers. His poetry was revolutionary—both artistically and politically—rejecting the verbal and philosophical constraints of tradition and utilizing direct, colloquial language. His subjects were peasants, the homeless, and sex workers, and this bilingual volume includes all the poetry Pavese ever published, including work originally deleted by Fascist censors. Pavese was a novelist, poet, and translator. He brought American influence to Italian literature through his translations. Pavese’s flight from the Fascists and subsequent confinement were reflected in his writings, which dealt with social struggle and revealed his sympathy for the oppressed. He died from suicide at the height of his literary powers.

I’m alive and at daybreak I’ve startled the stars.
My companion continues to sleep unaware.
All companions are sleeping. The day is a clear one
and stands sharper before me than faces in water.

In the distance an old man is walking to work
or enjoying the morning. We aren’t so different,
we both breathe the same faint glimmer of light
as we casually smoke, beguiling our hunger.
The old man, too, must have a body that’s pure
and vital—he ought to stand naked facing the morning.

Life this morning flows out over water
and in sunlight: around us the innocent splendor
of water, and all the bodies will soon be uncovered.
There’ll be a bright sun and the sharpness of sea air
and the harsh exhaustion that beats down in sunlight
and stillness. And my companion will be here—
a shared secret of bodies, each with its own voice.

There’s no voice to break the silence of water
at dawn. And neither is anything moving
beneath this sky. There’s only a star-melting warmth.
One shudders to feel the morning trembling
so virginally, as if none of us here were awake.

Cesare Pavese (1908–1950) was born in the countryside outside Turin, Italy. At age twenty-two he earned a PhD with a thesis on Walt Whitman and in the 1930s he became one of Italy’s leading translators of American literature; his version of Moby Dick is still the standard. In 1935 he was jailed on the vague charge of “anti-Fascist activities,” sentenced to three years of detention, and exiled to Brancaleone, Calabria. During this time he finished his first book, a collection … 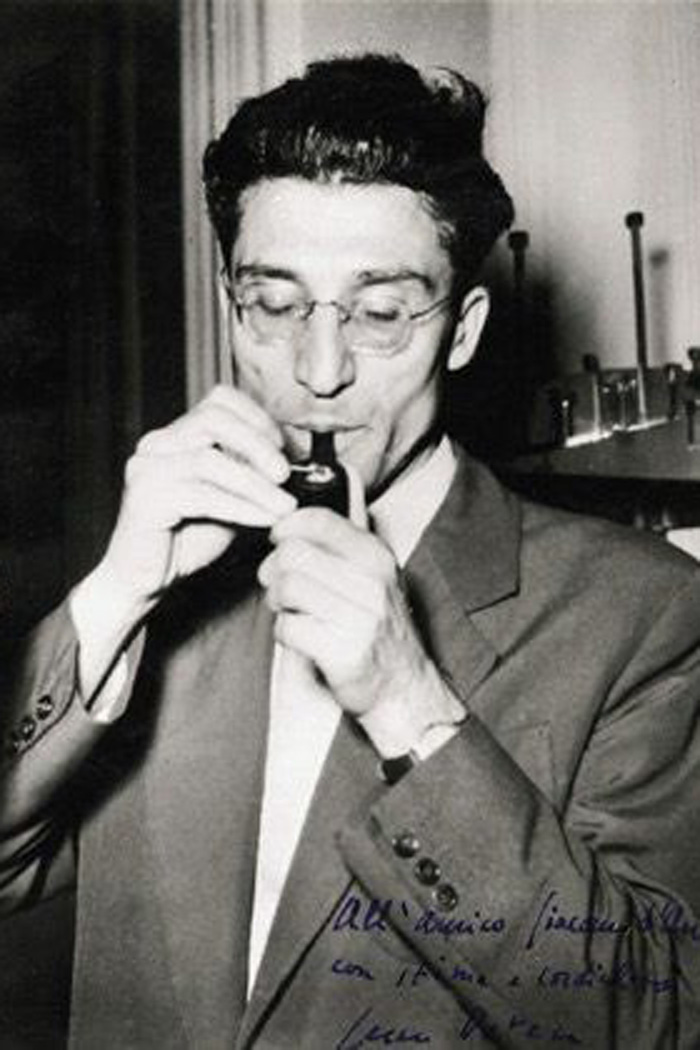 Geoffrey Brock is the translator of Cesare Pavese’s Disaffections: Complete Poems 1930-1950, which was a Los Angeles Times Best Book of the Year and won both the PEN Translation Prize and the Modern Language Association’s Lois Roth Award for translation. Brock has also translated books by Roberto Calasso, Umberto Eco, Italo Calvino, Giovanni Pascoli, and other Italian writers. He edited The FSG Book of 20th-Century Italian Poetry and is the author of two poetry collections, Weighing Light and Voices Bright … 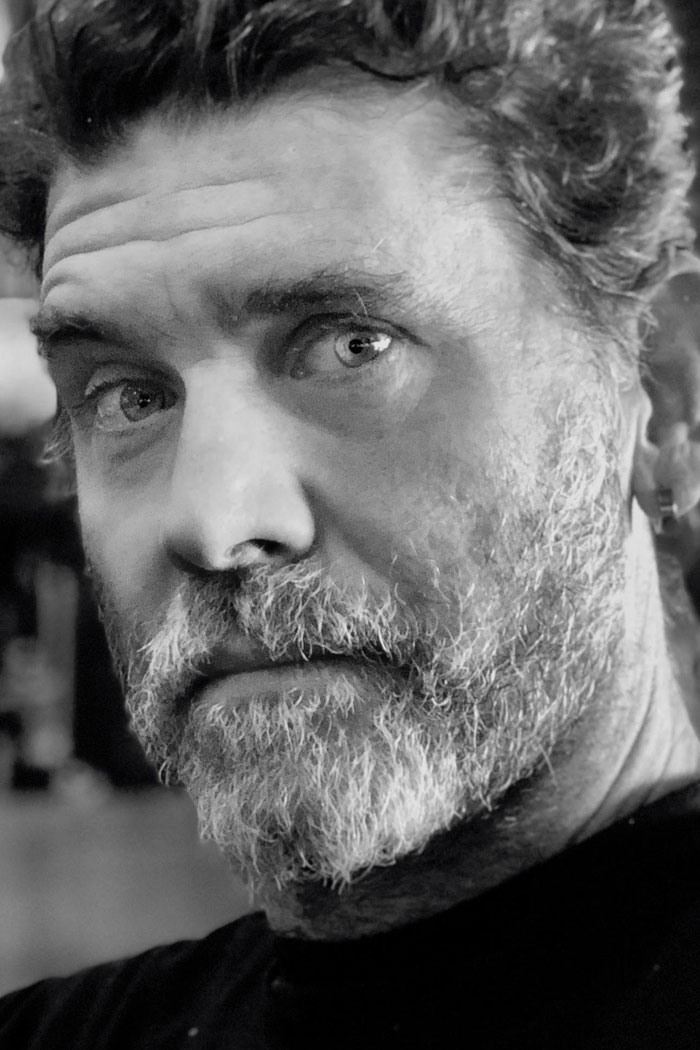 “Until now, Pavese’s poetry hasn’t been available in an English translation that carries both the colloquialness of his language and the haunting rhythms of his verse. Geoffrey Brock’s fine new translation has met this need so that… American readers can have the pleasure of getting to know him in some depth.” —LA Times Book Review

“An exemplary volume. As a poet-translator, Brock has brought Pavese’s poems to English without a loss of defining rhythm and meaning, and with an attention that indicates the translator’s profound understanding of another writer’s poetics.” —Judges’ citation, PEN USA Translation Award

“Pavese’s poems are gentle, soaring, and defiantly musical as they build toward the larger human truths he uncovered in writing about his beloved Italy.” —Bloomsbury Review

“The translation itself is a massive undertaking, and Brock has created a touchstone for understanding Pavese.” —Santa Fe New Mexican

“… it is a joy to welcome a new translation by Geoffrey Brock.” —The Progressive

“[I]n this new translation, Geoffrey Brock has captured Pavese’s unique timbre of sound, clarity of vision, the flesh of a poetic life. In the immediacy of impression and emotion, the starkness of the image, Brock’s versions do nothing to blunt Pavese’s powerful vision.” —Virginia Quarterly Review

“Brock manages to capture the rustic grit of these speakers, while also conveying the measured restraint of the original Italian. The result is that even when the poems downshift into understatement they maintain a mysterious apocalyptic tension, a poised balance between the metaphysical and the real that is the hallmark of Pavese’s mythic power… Brock is scrupulously faithful to the Italian text, consistently expressing in English the authentic sense and spirit of Pavese’s poems. As a result, we have been given access to a body of startlingly original poetic work.” —Literary Review

“Geoffrey Brock’s ‘hard labor’ in translating Pavese’s poetry has paid off in true poems in English: poems that have the density, the grit, the obdurate presentness hewn from silence for which Pavese fought so hard in Italian. Pavese’s poems remain vitally original in Italian a half century after their first appearance; in Brock’s English, they have the startling power of poems that will always be new.” —Rosanna Warren

“Pavese’s appeal has on the reader an immediate and emotional hold. To return to these texts today is to confirm the power of an utterance that sends us back to something beyond poetry, but without which poetry could not exist.” —Valerio Magrelli

“This translation by Geoffrey Brock is a rare convergence of ambition and skill. Pavese’s weird, hard grace suffuses these impressive renderings.” —Henry Taylor

“Superb translations of a major poet. Brock does the impossible: He keeps the letter and spirit of the originals and creates poems in an American voice.” —Philip Levine