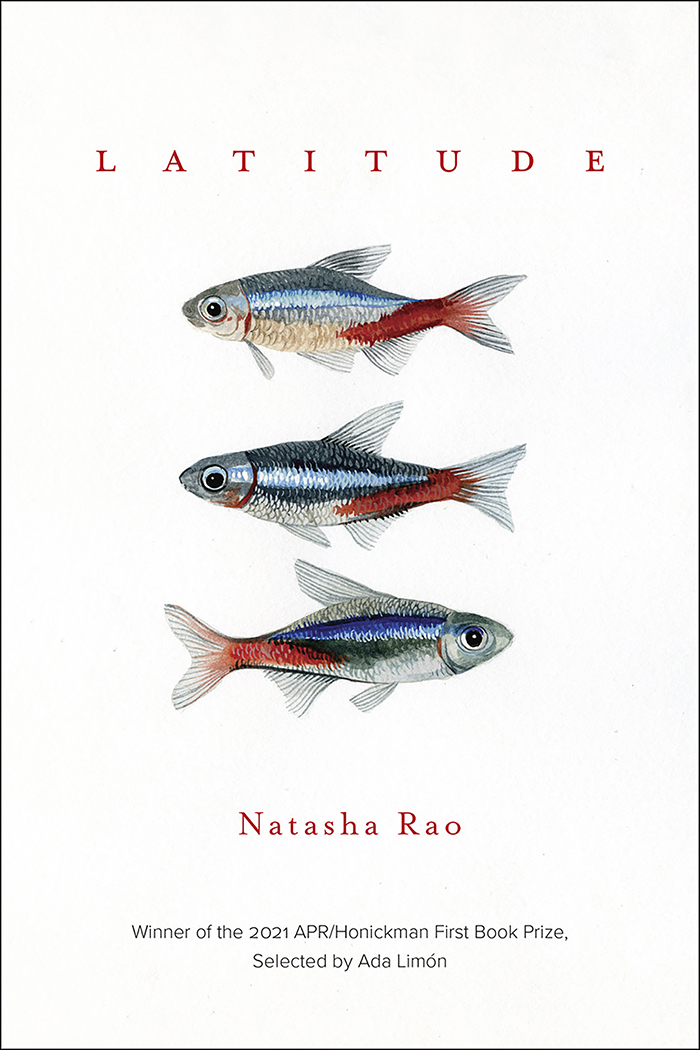 Chosen as the winner of the 2021 APR/Honickman First Book Prize by Guggenheim Fellow Ada Limón, Natasha Rao’s debut collection Latitude abounds with sensory delights, rich in colors, flavors, and sounds. These poems explore the complexities of family, cultural identity, and coming of age. By turns vulnerable and bold, Latitude indulges in desire: “In my next life let me be a tomato/lusting and unafraid,” Rao writes, “…knowing I’ll end up in an eager mouth.”

Back then I was committed to the color blue, felt moved
to paint my walls, nails, furniture the same shade of teal.
Now my body swells at the window with casual longing.
Do you believe in saltwater gargling. As a cure. At the gas
station I felt proud to specify it was the navy lighter we
wanted. Often the bravest thing I do all day is open my
mouth. On every beach washes up the memory of some
other beach when I didn’t evaluate my own body. Last
night Orion’s Belt filled me with dread because everyone I
have shown it to has exited my life with no warning. Still,
I couldn’t help myself. The light was brief and obvious.

In the liquor store I remembered a friend’s advancements
with unexpected enjoyment. To feel desired. The precedent
to shame. Being alone in a new, warm place fills me with
recklessness that I have never tried to quell. I watch my skin
darken in the sun before putting on a white dress. I am
looking for affirmation, something thick and encrusted with
shape. How to explain, even to oneself. Truthfully I didn’t
mind the smell of semen in the air. The bartender speared
blackberries on a toothpick over and over. The hotel parrot
had the voice of a lonely child.

Weekends I went to the park and said aww at passing dogs.
Not knowing the names of breeds the way my white friends
did, I sat in an embarrassed silence while they discussed their
preferences for Dachshunds and Dobermans. I knew the
names of plants and trees and constellations but kept this to
myself, could never sit in a white circle and change the color
of conversation. What I liked was sitting in the passenger seat
while a capable person found a place to pull over. The
hyperbolic shooting stars. I marveled at heaven and the
person and felt lucky I had found them, their unabashed turn
signals and disregard for trespassing signs. I was light and
fearless by proxy. The next morning we drove further into the
park and, like a small, round pebble, a noise slipped out my
mouth when I saw the geyser surge. The same mineraled gasp
the first time I felt a man erupt inside me. All that giddy
bubbling. Grand prismatic. Oh. It’s so unearthly here on earth.

Whitefish and red wine. Again, the barking of stray dogs.
Something unpronounceable at the back of my throat. I
followed my friend into her new life, drove through tunnel
after tunnel in Italy, undressed and jumped into the lake.
As soon as I remembered I could be anyone I took off my
silly costume and let out a limoncello laugh. Ate a nectarine
on the dock. Beauty is the answer, I thought simply, but
before I knew to what, I transformed back into myself and,
towel-less, began to shiver.

Newly blueberried air. A man said percolating underneath the
full moon and walked me to my car with a calculable
expression. To stand in front of the brook in total darkness.
To look at something you can’t see. While he tried
unsuccessfully to open the bottle of wine, I felt tenderness
but disappointment, a sadness for us both, the inevitability
of the part after the affair when we go back to our familiar
lives. I motioned for the corkscrew. He mentioned God. I
was surprised, given the scandalous circumstances, how
predictable it felt. Except for the wet grass in the meadow
which was, somehow, unimaginable.

In Spain, my brother and I side by side in twin beds awoke
the same moment beneath a squid ink sky. We had both
been dreaming of soup. Outside, feral cats slunk in and out
of ancient ruins. A day is like any other until you remember
what other days are like. In the plaza so many hands were
moving, everyone had something to say, the birds, the
fountain, the small dishes groaning with sauce, and I felt
unbearably embarrassed for everything.

To cut all ties. To not know what comes next. To watch
my nails grow longer, having forgotten to pack the
clipper. After being admonished by the flight attendant I
felt small, eating my ice cream with a thin wooden spoon.
I thought maybe if I lived in that place or wore that kind
of skirt, those earrings, I would have a life without regret.
How I loved ordering eggplant in your language before
climbing into the backseat and becoming free again.

Bonfire Night. The crags of Arthur’s Seat. Months before,
I watched my mother pray at the foot of her bed, knowing
it was for me. Hazelnut wafers. A thin, oily, gravy ladled
onto my plate. What I loved most was the light in the city.
No, what I loved most was myself, the person I became.
The happiness unsurprising and as expected as air, not a
frightening burst of euphoria that will leave you dull and
still after it is gone. All those vouchers for free pizza.
Steeple and stone. A soft, familiar rain. In this version of
reincarnation I can remember all my lives.

Immigration. The counter, not the noun. I cannot remember
what expression to make, which of my faces appears in the
passport photo. You see, sir, I am searching for relics. In
degrees north to south. Childhood was a civilization that fell.
I’m sorry, I don’t know how to answer your question.

Natasha Rao is the author of Latitude, recipient of the 2021 APR/Honickman First Book Prize. She holds a BA from Brown University and an MFA from NYU, where she was a Goldwater Fellow. She has received support from Bread Loaf, the Vermont Studio Center, and the Martha’s Vineyard Institute of Creative Writing, and she was named a 2021 Djanikian Scholar by The Adroit Journal. Her work appears or is forthcoming in The American Poetry Review, The Nation, The Yale Review, Poetry Northwest, and elsewhere. She … 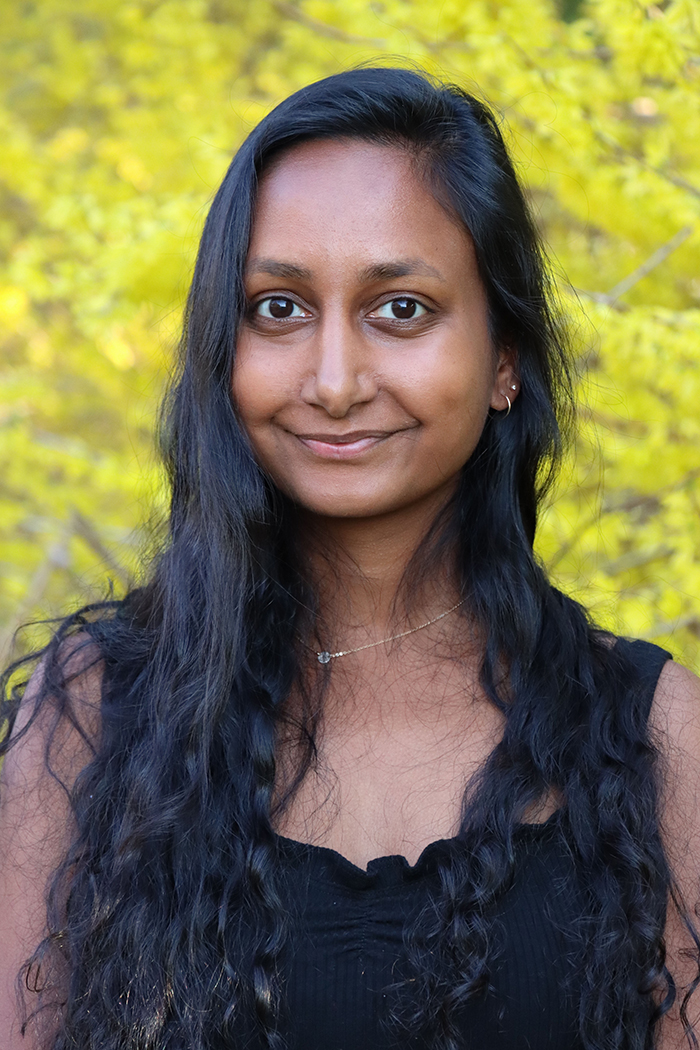