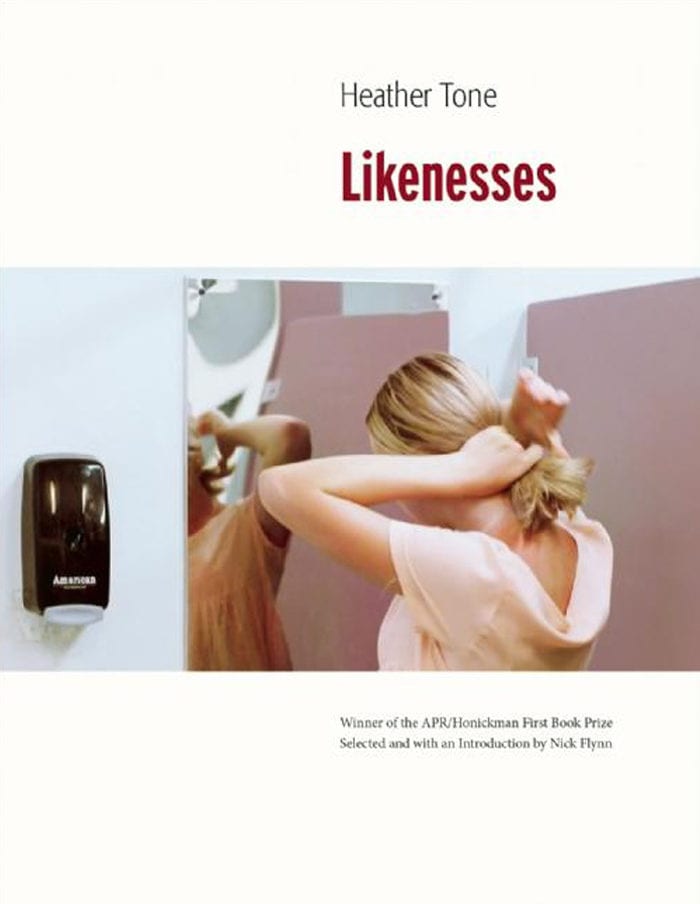 Likenesses explores the frontiers of metaphor and the power of repetition. The poems are at times at times skeptical, at times prayer-like, at times compulsive. They are populated by constantly shifting forms: cars become teenagers, leaves become “fall colored powder,” a thing breaks “into being.”

When he is dead, a man in a

A woman in a bathing suit

thin, in which case she looks like a little boy.

A little girl in a sundress looks like a little boy

in a sundress. Her mouth is a cold oval, as cold

as a strawberry. When dead, a robin redbreast

looks like a little girl, while it goes without

The snowfield cresting the mountain looks

The pines, boys right before they disappear

into men with cold faces who carry hatchets.

Just before it dies, a car looks like a teenager, but only

if it was built before the ’90s. After that, cars look like women.

Heather Tone is the author of a chapbook, Gestures (The Catenary Press). Her poetry has appeared in Boston Review, Colorado Review, Fence, and other journals. Likenesses is her first book and winner of the 2016 APR/Honickman First Book Prize. A graduate of the Iowa Writers’ Workshop, she currently lives in Florida.

“It’s almost impossible to explain why the playfulness of Heather Tone’s Likenesses produces such delight… Freedom, light, leggerezza, speed, and depth. Crystal abyss, ‘nothing,’ a touch of kabala. Perfect projections of shades between death and life, a scent of Eden. Like four-year-old boys throwing clumps of mud at each other, bursting into happy laughter. These lines scream with joy.” —Boston Review