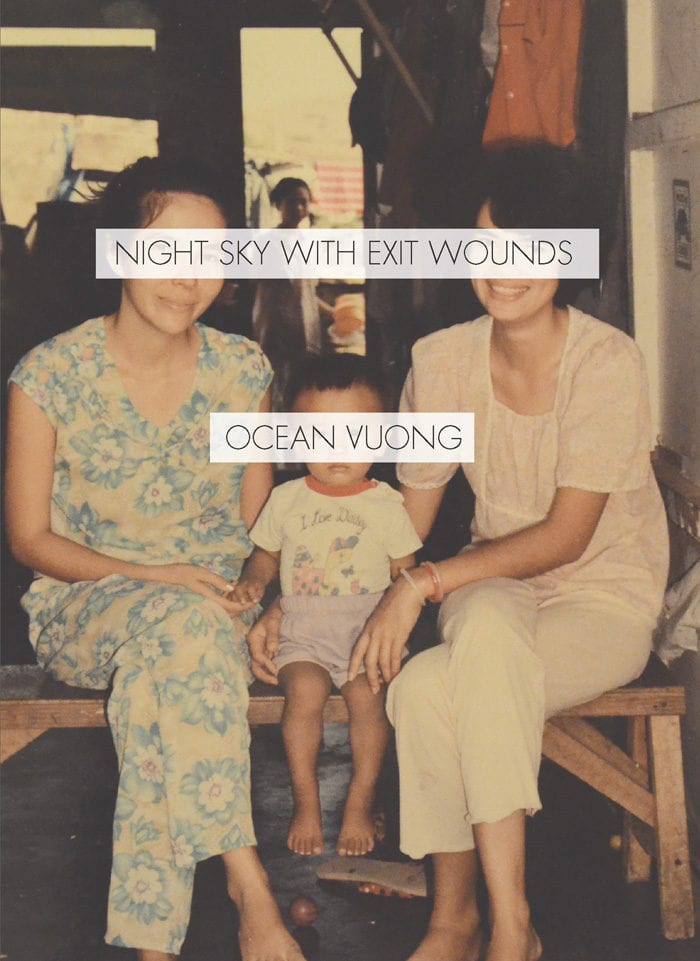 Ocean Vuong’s first full-length collection aims straight for the perennial “big”—and very human—subjects of romance, family, memory, grief, war, and melancholia. None of these he allows to overwhelm his spirit or his poems, which demonstrate, through breath and cadence and unrepentant enthrallment, that a gentle palm on a chest can calm the fiercest hungers.

The road which leads me to you is safe
even when it runs into oceans.
Edmond Jabès

*
Then, as if breathing, the sea swelled beneath us. If you must know anything, know that the hardest task is to live only once. That a woman on a sinking ship becomes a life raft—no matter how soft her skin. While I slept, he burned his last violin to keep my feet warm. He lay beside me and placed a word on the nape of my neck, where it melted into a bead of whiskey. Gold rust down my back. We had been sailing for months. Salt in our sentences. We had been sailing—but the edge of the world was nowhere in sight.
*
When we left it, the city was still smoldering. Otherwise it was a perfect spring morning. White hyacinths gasped in the embassy lawn. The sky was September-blue and the pigeons went on pecking at bits of bread scattered from the bombed bakery. Broken baguettes. Crushed croissants. Gutted cars. A carousel spinning its blackened horses. He said the shadow of missiles growing larger on the sidewalk looked like god playing an air piano above us. He said There is so much I need to tell you.
*
Stars. Or rather, the drains of heaven—waiting. Little holes. Little centuries opening just long enough for us to slip through. A machete on the deck left out to dry. My back turned to him. My feet in the eddies. He crouches beside me, his breath a misplaced weather. I let him cup a handful of the sea into my hair and wring it out. The smallest pearls—and all for you. I open my eyes. His face between my hands, wet as a cut. If we make it to shore, he says, I will name our son after this water. I will learn to love a monster. He smiles. A white hyphen where his lips should be. There are seagulls above us. There are hands fluttering between the constellations, trying to hold on.
*
The fog lifts. And we see it. The horizon—suddenly gone. An aqua sheen leading to the hard drop. Clean and merciful—just like he wanted. Just like the fairy tales. The one where the book closes and turns to laughter in our laps. I pull the mast to full sail. He throws my name into the air. I watch the syllables crumble into pebbles across the deck.
*
Furious roar. The sea splitting at the bow. He watches it open like a thief staring into his own heart: all bones and splintered wood. Waves rising on both sides. The ship encased in liquid walls. Look! he says, I see it now! He’s jumping up and down. He’s kissing the back of my wrist as he clutches the wheel. He laughs but his eyes betray him. He laughs despite knowing he has ruined every beautiful thing just to prove beauty cannot change him. And here’s the kicker: there’s a cork where the sunset should be. It was always there. There’s a ship made from toothpicks and superglue. There’s a ship in a wine bottle on the mantel in the middle of a Christmas party—eggnog spilling from red Solo cups. But we keep sailing anyway. We keep standing at the bow. A wedding-cake couple encased in glass. The water so still now. The water like air, like hours. Everyone’s shouting or singing and he can’t tell whether the song is for him—or the burning rooms he mistook for childhood. Everyone’s dancing while a tiny man and woman are stuck inside a green bottle thinking someone is waiting at the end of their lives to say Hey! You didn’t have to go this far. Why did you go so far? Just as a baseball bat crashes through the world.
*
If you must know anything, know that you were born because no one else was coming. The ship rocked as you swelled inside me: love’s echo hardening into a boy. Sometimes I feel like an ampersand. I wake up waiting for the crush. Maybe the body is the only question an answer can’t extinguish. How many kisses have we crushed to our lips in prayer—only to pick up the pieces? If you must know, the best way to understand a man is with your teeth. Once, I swallowed the rain through a whole green thunderstorm. Hours lying on my back, my girlhood open. The field everywhere beneath me. How sweet. That rain. How something that lives only to fall can be nothing but sweet. Water whittled down to intention. Intention into nourishment. Everyone can forget us—as long as you remember.
*
Summer in the mind.
God opens his other eye:
two moons in the lake.

“Night Sky with Exit Wounds establishes Vuong as a fierce new talent to be reckoned with… This book is a masterpiece that captures, with elegance, the raw sorrows and joys of human existence.” —Buzzfeed’s “Most Exciting New Books of 2016”

“This original, sprightly wordsmith of tumbling pulsing phrases pushes poetry to a new level…A stunning introduction to a young poet who writes with both assurance and vulnerability. Visceral, tender and lyrical, fleet and agile, these poems unflinchingly face the legacies of violence and cultural displacement but they also assume a position of wonder before the world.” —Judges’ citation, Whiting Award, 2016

“Night Sky with Exit Wounds is the kind of book that soon becomes worn with love. You will want to crease every page to come back to it, to underline every other line because each word resonates with power.” —LitHub

“In his impressive debut collection, Vuong, a 2014 Ruth Lilly fellow, writes beauty into—and culls from—individual, familial, and historical traumas. Vuong exists as both observer and observed throughout the book as he explores deeply personal themes such as poverty, depression, queer sexuality, domestic abuse, and the various forms of violence inflicted on his family during the Vietnam War. Poems float and strike in equal measure as the poet strives to transform pain into clarity. Managing this balance becomes the crux of the collection, as when he writes, ‘Your father is only your father / until one of you forgets. Like how the spine / won’t remember its wings / no matter how many times our knees / kiss the pavement.’” —Publishers Weekly

“What a treasure [Ocean Vuong] is to us. What a perfume he’s crushed and rendered of his heart and soul. What a gift this book is.” —Li-Young Lee