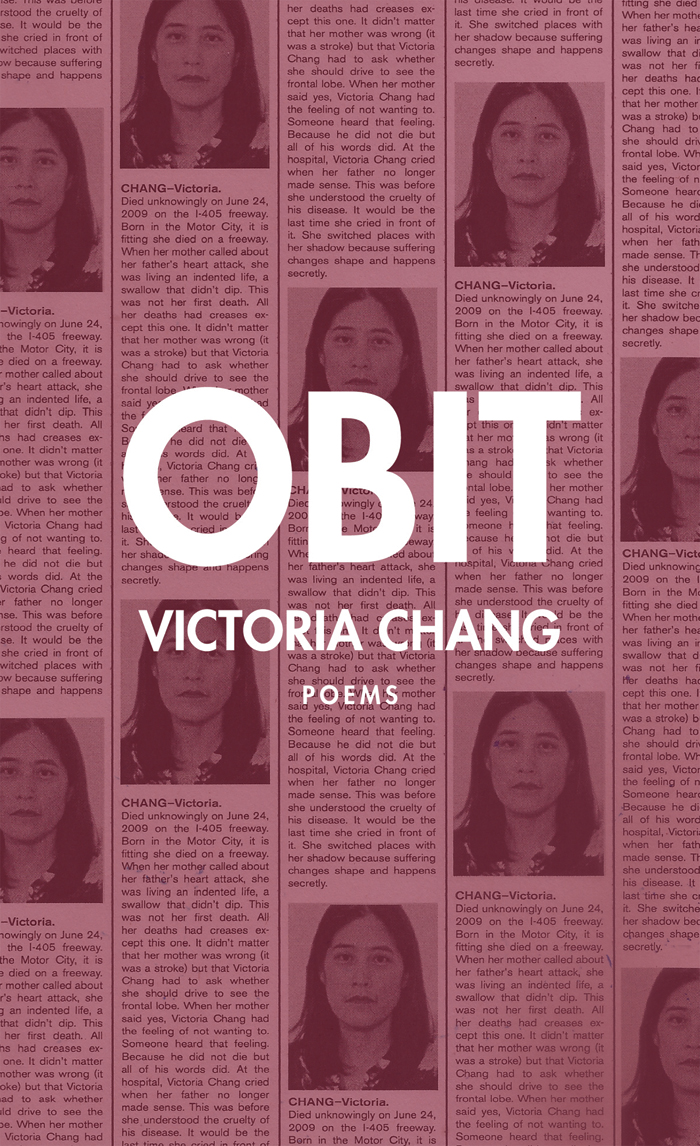 After her mother died, poet Victoria Chang refused to write elegies. Rather, she distilled her grief during a feverish two weeks by writing scores of poetic obituaries for all she lost in the world. In Obit, Chang writes of “the way memory gets up after someone has died and starts walking.” These poems reinvent the form of newspaper obituary to both name what has died (“civility,” “language,” “the future,” “Mother’s blue dress”) and the cultural impact of death on the living. Whereas elegy attempts to immortalize the dead, an obituary expresses loss, and the love for the dead becomes a conduit for self-expression. In this unflinching and lyrical book, Chang meets her grief and creates a powerful testament for the living.

Listen to Victoria Chang read “The Doctors” from Obit:

Language—died again on August
3, 2015 at 7:09 a.m. I heard about
my mother’s difficult nights. I hired
a night person. By the time I got
there, she was always gone. The
night person had a name but was like
a ghost who left letters on a shore
that when brought home became
shells. Couldn’t breathe, 2:33 a.m.
Screaming, 3:30 a.m. Calm, 4:24
a.m. I got on all fours, tried to pick up
the letters like a child at an egg hunt
without a basket. But for every letter
I picked up, another fell down, as if
protesting the oversimplification of
my mother’s dying. I wanted the night
person to write in a language I could
understand. Breathing unfolding,
2:33. Breathing in blades, 3:30.
Breathing like an evening gown,
4:24. But maybe I am wrong, how
death is simply death, each slightly
different from the next but the final
strike all the same. How the skin
responds to a wedding dress in the
same way it responds to rain.

Victoria Chang’s books include OBIT, Barbie Chang, The Boss, Salvinia Molesta, and Circle. Her children’s picture book, Is Mommy?, was illustrated by Marla Frazee and published by Beach Lane Books/Simon & Schuster. It was named a New York Times Notable Book. Her middle grade novel, Love Love will be published by Sterling Publishing in 2020. She has received a Guggenheim Fellowship, a Sustainable Arts Foundation Award, the Poetry Society of America’s Alice Fay Di Castagnola Award, a Pushcart Prize, and … 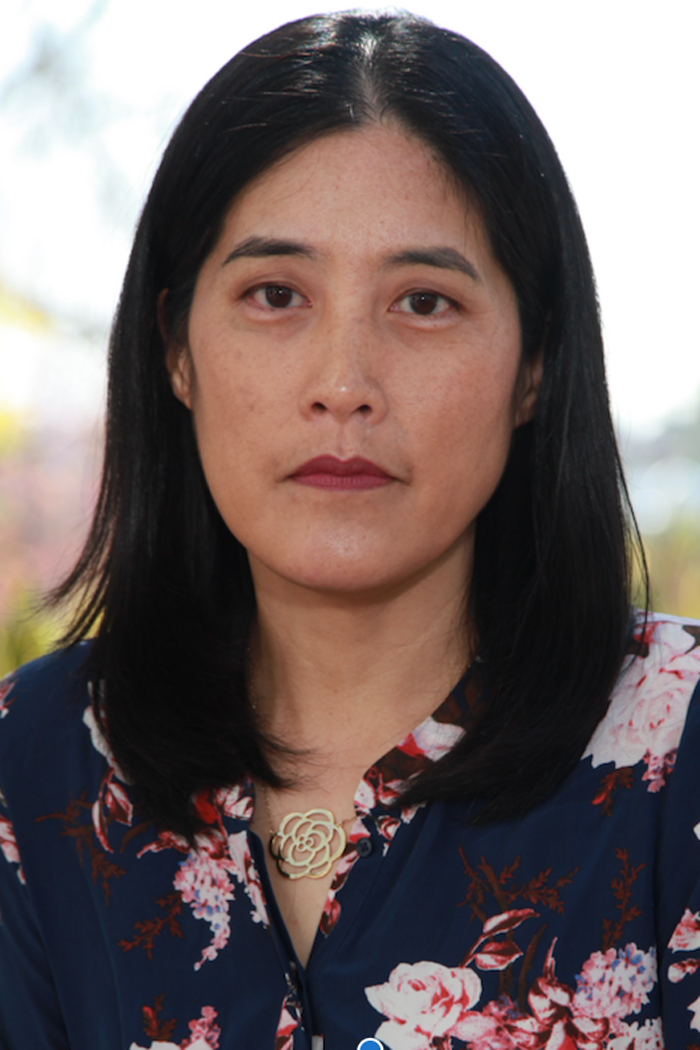 “In [Obit], mortality is not a before and after state, but rather a constantly shifting enigma…” —The New York Times Book Review

“Chang has created a unique poetic construct… The feeling of hope is a theme throughout this solid collection, in variations Chang evokes with grace: ‘Hope / is the wildest bird, the one that flies / so fast it will either disappear or burst / into flames.’ Chang’s poetry fine tunes that conflagration with acuity.” —Booklist

“[Obit] marshals all the resources of poetry against the relentless emotional cascade that’s associated with death—and, very much to its credit, and as a testament to its success, the book has arrived at a kind of momentary stalemate against that cascade.”—Rick Barot

“Chang is consistently a poet who resurrects mediums, her work living within surprising spaces and forms, and both exposing and surpassing the possibilities for those structures… Chang has the rare poetic talent to follow the edges of dark comedy to find sentiment rather than irony.” —The Millions

“Here we have unmitigated heartbreak—but heartbreak mercifully free of the usual ‘death etiquette’: platitudes of ‘after-lives’ or ‘better offs.’ Thus, Victoria Chang has created something powerful and unconventional. These poems are zinger curveballs, and often come from the graveyard’s left field.” —Los Angeles Review of Books

“These obits are fearless. They are also specific and intimate… The emotional power of Chang’s Obits comes from the grace and honesty with which she turns this familiar form inside out to show us the private side of family, the knotting together of generations, the bewilderment of grief.” —Ploughshares

“In this sea of losses, we find meditations on death, and love, and forgiveness—the normal fixings of elegy. But we also find resentment. We find fear, and irritation, and uncertainty. We find poems which speak to a more full experience of death—poems which don’t shy away from the flaws of the dead, the inconvenience and expense of dying.” —Drizzle Review

“Victoria Chang’s lyrical study of grief, Obit, makes way for a sustained yet startling and exquisite personal history… [T]hough this moving and brilliant book deals resoundingly with death, Chang successfully injects humor, joy, and hope when and where they’re needed the most.” —Open Books: A Poetry Emporium

“Obit’s elegies show us how grief radiates from a central loss inwardly toward self-examination, and outwardly toward collective grief. The various losses Chang describes are not hierarchical but radical, meaning they eschew easy connections and challenge paradigmatic notions of ‘form,’ ‘reason,’ and ‘memory,’ for example, in order to communicate feeling.” —Ploughshares

“As a lyrical case study of a person coming to accept the hard terms of such love, Obit offers both instruction and solace.” —Porter House Review

“Overall, readers who have lost parents to illness or death, have looked back on aspects of their lives to find them not what they seemed to be, will find their emotions here distilled in heartbreaking and quiet intensities.” —International Examiner

“Obit cracks open the silence around death and grief at a time when we all need it most.” —1508 at The University of Arizona Poetry Center

“Each poem is a masterwork of compression and compassion.” —Kenyon Review

“Obit reckons with death by swimming inside it… grief is tended to and given space.” —The Rumpus

The New York Times “10 Books to Read This Week”

Buzzfeed, “These Are Our Most Anticipated Books of 2020″

Vanity Fair, “Why Poetry is Having A Moment Amid the Global Quarantine”

Bill Moyers, A Poet A Day