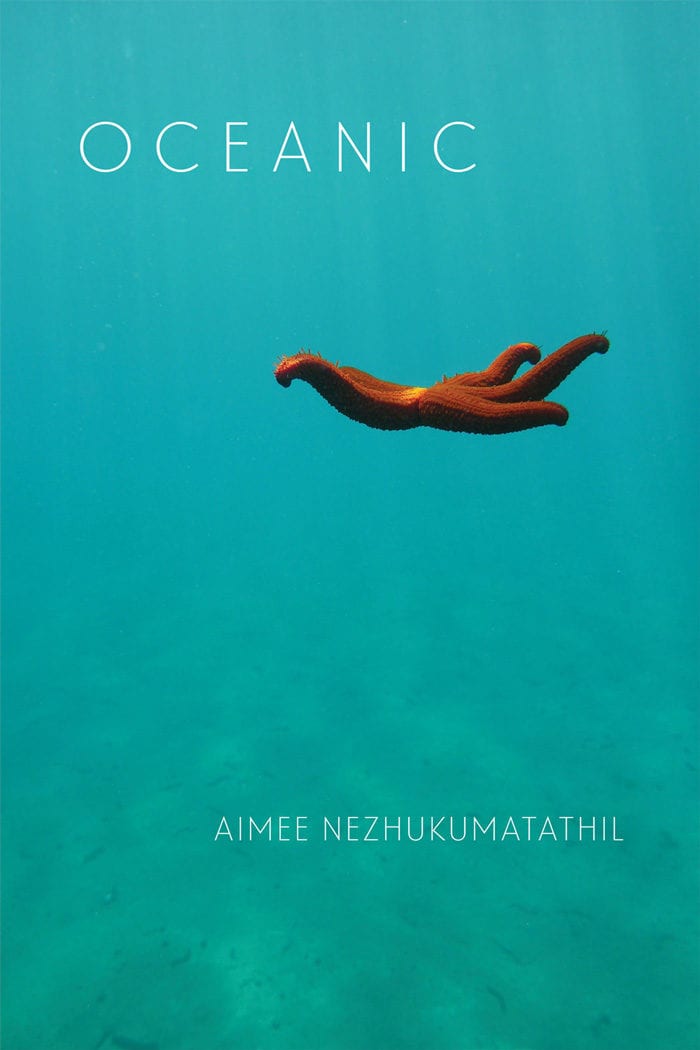 With inquisitive flair, Aimee Nezhukumatathil creates a thorough registry of the earth’s wonderful and terrible magic. In her fourth collection of poetry, she studies forms of love as diverse and abundant as the ocean itself. She brings to life a father penguin, a C-section scar, and Niagara Falls with a powerful force of reverence for life and living things. With an encyclopedic range of subjects and unmatched sincerity, Oceanic speaks to each reader as a cooperative part of the earth, an extraordinary neighborhood to which we all belong.

after the song of the same name by Prince

the bluesail left on the shore after a riotous night.
And that’s how you feel after tumbling
like sea stars on the ocean floor over each other.
A night where it doesn’t matter

which are arms or which are legs
or what radiates and how—
only your centers stuck together.
Underwater volcanoes send up pillow lava,

and after a night like that you rest
your head on it, caring not about
the burn but the startle of falling asleep
with his lip just inside yours.

All the shifts and small adjustments
with this fish-bright and beautiful body.
A nightstand knocked clean of its clock.
What care and flair goes into the person

who rises after a night like that to mix
flour, sugar, eggs, and oil—who puts on
a pot of hickory coffee, a fine butter dish,
a vial of syrup on the table—then goes back

to the bed where you lie: cheeks still rosy,
one hand still clutching a fistful of pillow,
hair tentacled over the side of the bed
your three hearts so full, so hungry, so purple.

Aimee Nezhukumatathil is the author of four books of poetry, most recently Oceanic, winner of the Mississippi Institute of Arts and Letters Award in poetry. Other awards for her writing include fellowships and grants from the National Endowment for the Arts, Mississippi Arts Commission, and MacDowell. Nezhukumatathil is poetry editor of Orion and her writing has appeared in Poetry, The New York Times Magazine, ESPN, and Tin House. Her book of illustrated nature essays is forthcoming with Milkweed. She serves … 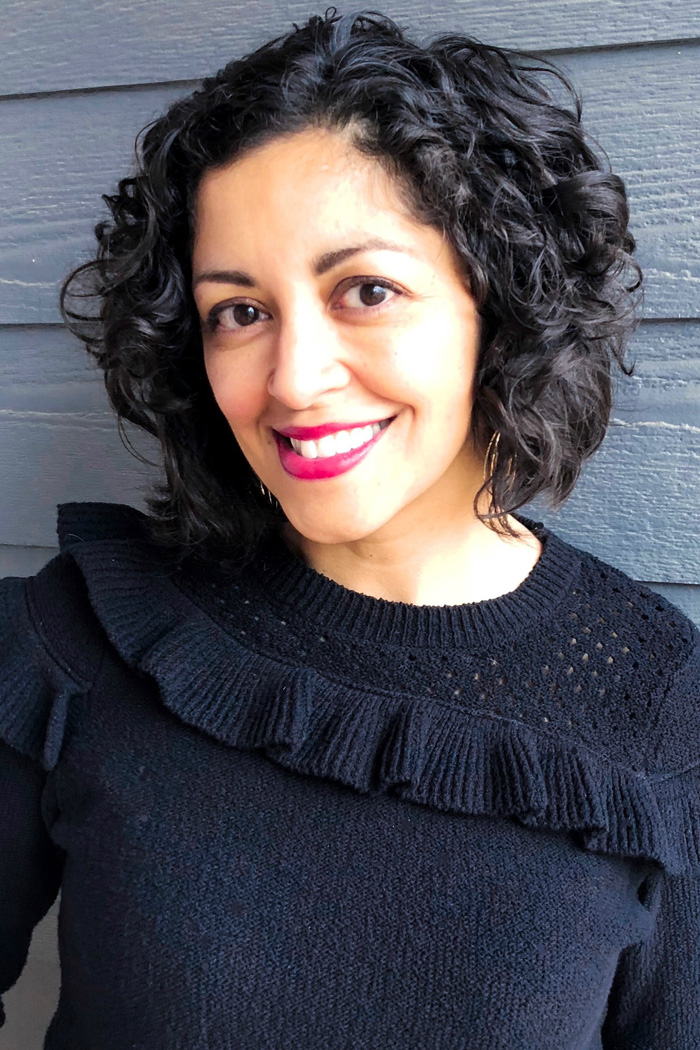 “Nezhukumatathil’s poems contain elegant twists of a very sharp knife. She writes about the natural world and how we live in it, filling each poem, each page with a true sense of wonder.” —Roxane Gay

“What really stitches Oceanic together is Nezhukumatathil’s musical voice. These poems feel crystal clear in their logic and construction, walking carefully from the metaphoric and imagistic to something more transcendent and strange, reminding us that we are linked to the natural world in deep and surprising ways.” —August Smith, BookPage

“Cultural strands are woven into the DNA of her strange, lush… poems. Aphorisms… from another dimension.” —New York Times

“With unparalleled ease, she’s able to weave each intriguing detail into a nuanced, thought-provoking poem that also reads like a startling modern-day fable.” —Poetry Foundation

“How wonderful to watch a writer who was already among the best young poets get even better!” —Terrance Hayes

“Reading Nezhukumatathil’s poems is a practice in keenly observing life’s details. The poet writes with a romantic sensibility about a world saturated with a deep sense of loss. Recommended for all poetry readers, especially those interested in ecopoetry.” —Library Journal

“Sensual and vivid, [Nezhukumatathil’s] poems invite us deep into the water, where ‘colors humans have / not yet named glow in caves made from black coral and clamshell.’ Her images are lush with eroticism, always close to the body and its experience of wonder. She blurs the line between human and animal, casting herself (and her beloved) variously as a scallop, a whale shark, a penguin, a starfish. Such marvelous acts of transformation reshape us as we read.” —San Francisco Chronicle

“… from the poetic structures that cultivate dazzling settings to the metaphors that brim with possibility, Oceanic… reawakens my curiosity for a world that still holds so many undiscovered wonders.” —Literary Review

“[Oceanic] is an important work, both for its poetic merits and for its incisive capture of the increasingly precarious nature of life, both human and nonhuman, on this planet.” —Ploughshares

“… Throughout Oceanic, Nezhukumatathil upends conventional notions of both what power looks like and what safety means. For her, the natural forces human beings have long regarded as dangerous—tigers, snakes, lava—can be sources not just of power but also of safety.” —Georgia Review

“Perfect for readers with a voracious appetite and a burgeoning curiosity.” —Literary Hub

“ Despite its title, Oceanic is much more than a love letter to the ocean. Full of poems that are passionate about the environment without being preachy, that beautifully name and describe the natural world, and that honor self, love, and family, Oceanic is a celebration of nature and of life itself.” —Jeannine Hall Gailey, The Rumpus

“Her poems invoke a sense of connectedness… Nezhukumatathil weaves meditations on parenting and family-making among her lavishly rendered evocations of flora and fauna… Nezhukumatathil’s voice is consistent in its awe.” —Publishers Weekly

“Oceanic is a generous, romantic, and ambitious look at the different stages of life, and how we experience the love and wonder that lead us to become more fully realized and compassionate as we grow each decade… [it’s] Nezhukumatathil’s most cohesive collection to date, as she takes her prior preoccupations and dissects them in new ways that invite, as all of her work does, a sense of marvel and astonishment.” —Tin House

“Oceanic is a story of restoration, and the end goal is love.” —Tupelo Quarterly