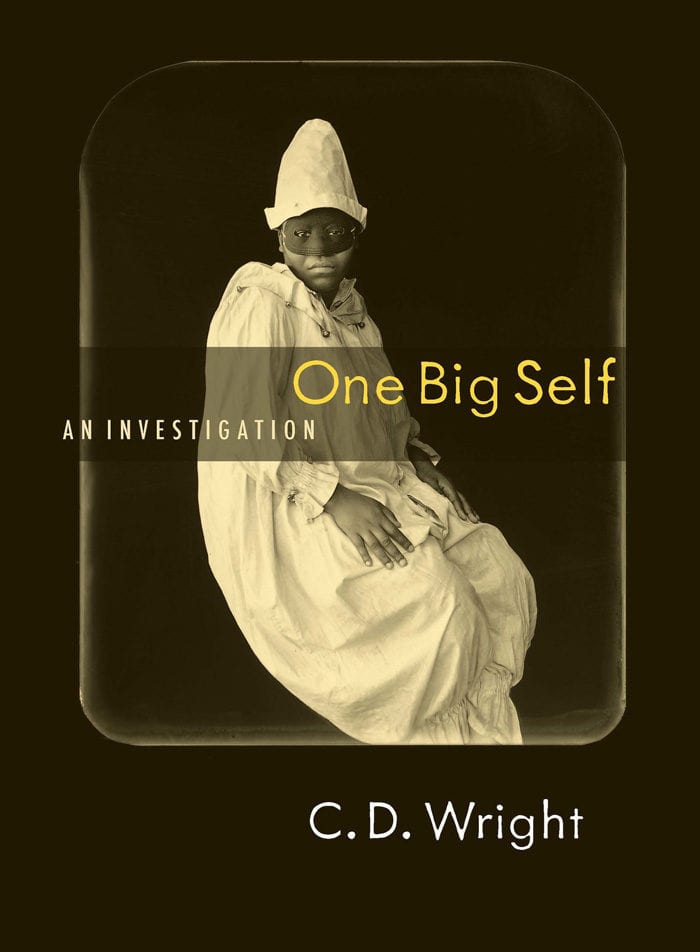 Inspired by visits to Louisiana state prisons—where MacArthur fellow C.D. Wright accompanied portrait photographer Deborah Luster—One Big Self bears witness to incarcerated men and women and speaks to the corrosive toll of protracted confinement. It is a mixture of distinct voices, epistles, fragments from an antique and aggressively pious board game, road signage, prison data, inmate correspondence, and inventories of things—from baby teeth to chigger bites. As Wright proposes in her introduction: “Not to idealize, not to judge, not to exonerate, not to aestheticize immeasurable levels of pain. Not to demonize, not anathematize. What I wanted was to unequivocally lay out the real feel of hard time.”

The original photobook edition of One Big Self, featuring photographs by Deborah Luster, was selected by the New York Times and Village Voice as a notable photography book of the year. This new edition features the poem exclusively.

On the phone he told his sister
He hung strips of a plastic bag from his bunk
And pretended he was in his boat
And his cellmate’s flushing, Arctic Ocean

“A harrowing vamp that is as much a compassionate portrayal of prison life as it is about the fragmentary way anyone comes to know anyone else. Wright gets better with each book, expanding the reach of her art; it seems it could take in anything.” —Publishers Weekly, starred review

“Rather than an attempt to echo, or amplify the photographs, Wright has wisely followed her own ear, creating a kind of chapbook of Southern prison lore… the poem adds tragicomic richness to the pictures and makes One Big Self a big success.” —New York Times Book Review

“Wright’s poetic pictures are as sharp and evocative as any made with camera… Wright’s point is not to create portraits of individual prisoners but to make a montage of human faces behind bars.” —Salem Press

“Wright portrays landscape as always active, and one of her challenges in this project was to apply this poetic sensibility to the inherently static world of incarceration. In response, her poems arrest time through repetition and a looping of specific phrases and images. Perhaps most significantly for this temporal slowdown, she withholds a sense of redemption that she knows isn’t hers to give.” —Boston Review

“Understatement and poetics may keep the reader on edge, but the poem never lacks the observational juice that can be the genesis of empathy.” —Virginia Quarterly Review

“In this hybrid book, Wright portrays real events and emotions using poetry’s particular bag of tricks, not just the facts themselves. This blend of lyricism and journalism penetrates to the heart of the matter more ably than perhaps either genre could have on its own and offers one of the most powerful accounts of prison life to be found.” —Bookforum

“This is poetry that rewards exactly as much time and attention as the reader is willing to bring.” —Open Letters Monthly