Home > Books > One With Others by C.D. Wright 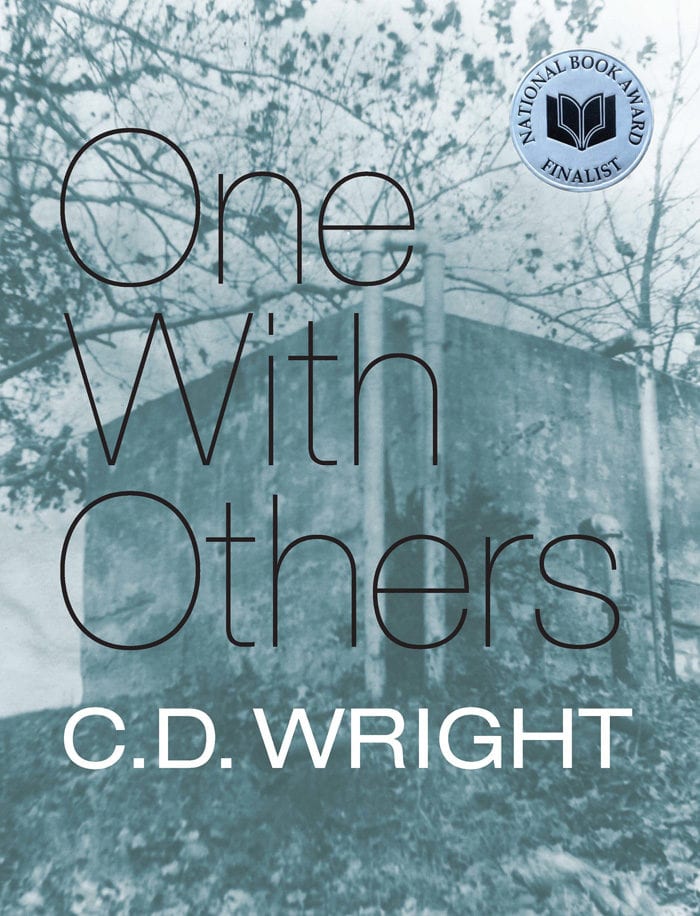 Investigative journalism becomes the poet’s realm as C.D. Wright returns to her native Arkansas and examines an explosive incident grounded in the Civil Rights Movement. In her signature style, Wright interweaves oral histories, hymns, lists, interviews, newspaper accounts, and personal memories—especially those of her incandescent mentor, Mrs. Vittitow (V)—with the voices of witnesses, neighbors, police, activists, and a group of black students who were rounded up and detained in an empty public swimming pool. This is a history told by many voices, and it leaps howling off the page.

THIS IS ONE OF THE THINGS I HEAR HAPPENED

THIS IS ONE OF THE THINGS I HEAR HAPPENED: She has just

folded herself over to brush off the brown leaves covering her coleus. She has

been stacking wood. She has on the work glove. She is going back inside to clean

up; she bends from the waist to make a quick pass at the leaves that she might

still enjoy the tart color of on her coleus a bit longer. She feels a quick sting,

thinks it’s a wasp or hornet and goes inside [the light at the sink is better]. As

soon as the glove is off and she grabs the baking soda to put on the spot, she

hands her best feature, better than the legs even], the throb, already throbbing,

peers into the coleus the dusty reddish thing, the sickening hourglasses along its

thick length as it creeps soundlessly into the foliage, and it passes through her

“One with Others represents Wright’s most audacious experiment yet in loading up lyric with evidentiary fact. An affecting element of this book is the way its elegiac impulses accord with, even as they chafe against, the documentary impulses…” —New Yorker

“Through juxtaposition and repetition, [Wright] weaves a compelling, disturbing, and often beautiful tapestry that at once questions the ability of language to get at the complicated truth of history (‘because the warp is everywhere’), and underscores the ethical imperative to try. As Wright learns from V, ‘To act, just to act. That was the glorious thing.'” —Publishers Weekly

“Wright’s sharply fractured, polyphonic, and suspenseful book-length poem is both a searing dissection of hate crimes and their malignant legacy and a lyric, droll, and fiery elegy to a woman of radiant resistance.” —Booklist

“One With Others is potent because it is alive with voices, alive with suffering, alive with a language which earmarks an era, but also a message which seeks to persist. It is alive with an ideology of hatred that still courses through the United States today… Wright’s rolling blend of voices helps the reader to access the psychic landscape of Civil Rights Era-Arkansas in a way that nonfiction and news reports do not… One With Others is a reckoning of ghosts.” —Coldfront

“These ranging narratives—V’s life, the March, Wright’s journey—are blended in puzzle-piece increments, so the act of reading involves separating them out, constructing a frame, watching chronology and characters emerge. In this way, Wright insists that all these stories are one story, resisting the divisions of segregationists. ‘One with others’ is both title and thesis.” —Antioch Review

“One With Others (2010) won the National Book Critics Circle Award and the Lenore Marshall Poetry Prize. It mixes journalism, history, and poetry to explore an incident in the Civil Rights movement in Arkansas. Wright draws on oral histories, hymns, lists, newspaper articles, and memories.” —Book Riot