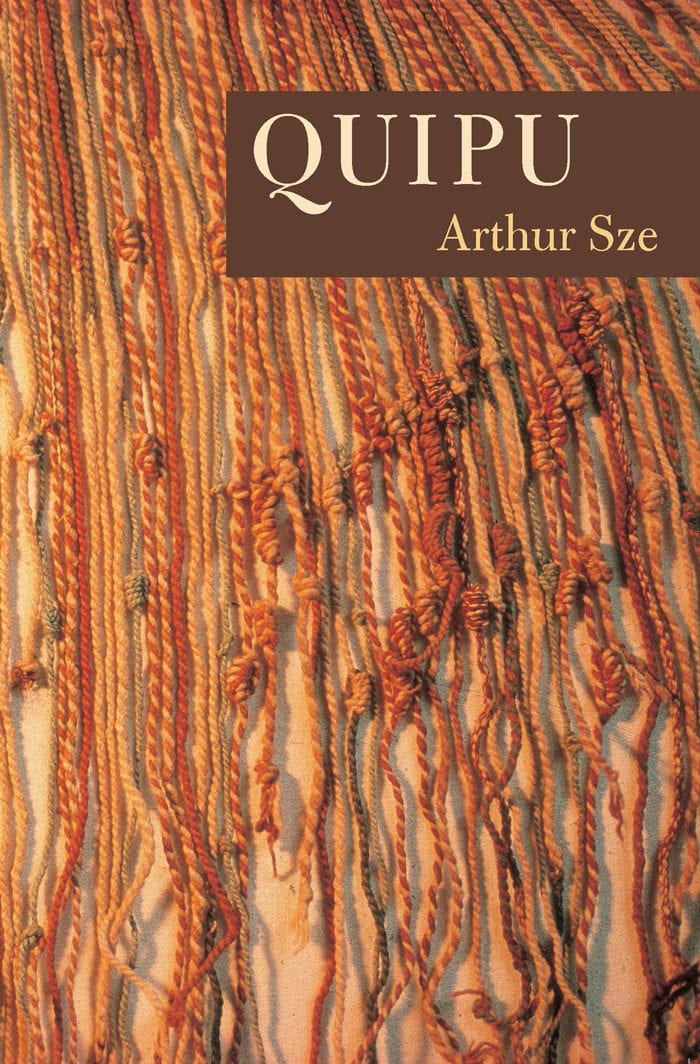 In Quipu, Arthur Sze’s eighth book of poetry, he writes with imaginative rigor and urgency poems that move across cultures and time, from elegy to ode, to find a precarious splendor. “Quipu” was a tactile recording device for the pre-literate Inca, an assemblage of colored knots on cords. Sze utilizes quipu as a central metaphor, knotting and stringing luminous poems that each have an essential place and integrity, each contributing to the recurrent “knotting” in the book. Sze’s language is taut and startling, and what appears stable may actually be volatile. In Quipu, Sze harnesses the particulars of our lives and spins them into something enduring. He makes us envision the terrors and marvels of our contemporary world in this collection of crucial poems of our time.

I notice headlights out the living-room window
then catch the bass in a pickup as it drives by.
I am shocked to learn that doctors collected
the urine of menopausal nuns in Italy to extract
gonadotropins. And is that what one draws,
in infinitesimal dose, out of a vial?
I remember a steel-wool splinter in my finger
and how difficult it was to discern, extract
under a magnifying glass; yet—blue mold,
apple dropping from branch—it is hard to see
up close when, at the periphery, the unexpected
easily catches the eye. Last Thursday night,
we looked through binoculars at the full moon,
watched it darken and darken until, eclipsed,
it glowed ferrous-red. By firelight, we glowed;
my fingertips flared when I rubbed your shoulders,
softly bit your ear. The mind is a tuning fork
that we strike, and, struck, in the syzygy
of a moment, we find the skewed, tangled
passions of a day begin to straighten, align, hum.

“Sze turns often to what was once called ‘natural philosophy’—particularly astrophysics and botany—to detail worlds for his all-too-human actors. He’s not alone. But if a common, unstated goal is to borrow a scientific rigor against poetry’s reputation for riot, Sze need not worry. In his eighth book, his lines and logic are thoughtful and sere as ever; few current lyricists so little need to outsource structural soundness. A classically elegant Sze line from the long title poem runs, ‘Who can unravel the spin of an elegy and counterspin it into an ode?’ But not all is subatomic metaphor, and much hangs on the sensual; striding an open New Mexico landscape, Quipu can be a pretty sexy book… a reminder of how familiarity might not breed contempt but elegant care.” —New York Times Book Review

“Quipu are knotted cords used for record-keeping in Inca civilization and, as Sze reminds us, by the ancient Chinese. As in earlier work, Sze (The Redshifting Web) weaves together details from nature (especially from New Mexico, where he lives), questions from philosophy, and discoveries from modern physics, collecting facts with a Thoreau-like patience. To the hints of Taoism some readers have found in his previous work, Sze adds a focus on domestic life and erotic love. Liminal encounters between people and animals, lovers and strangers, even rocks, fish and sky, create a poetry of simultaneity, and a contemplative mindset.” —Publishers Weekly

“In metaphorically applying the possibilities of the quipu to poetry, Sze weaves a shifting, shimmering fabric of images and instances, a vibrant homage to what Stevens called ‘the intricacies of appearance.’ If, as Sze writes, ‘The mind is new each day,’ then the things of this world afford endless opportunity for its replenishment and wonder… Engaged with the quotidian across the spectrum of its manifestations, Sze recovers marvels in troubling times.” —Library Journal

“Whether incorporating nature, philosophy, history, or science, Sze’s poems are expansive. They unfold like the time-slowed cinematic recording of a flower’s blooming: the seed of an idea is germinated, thought or feeling buds, then the poem blooms entire. Sze has a refreshingly original sensibility and style, and he approaches writing like a collagist by joining disparate elements into a cohesive whole.” —Booklist