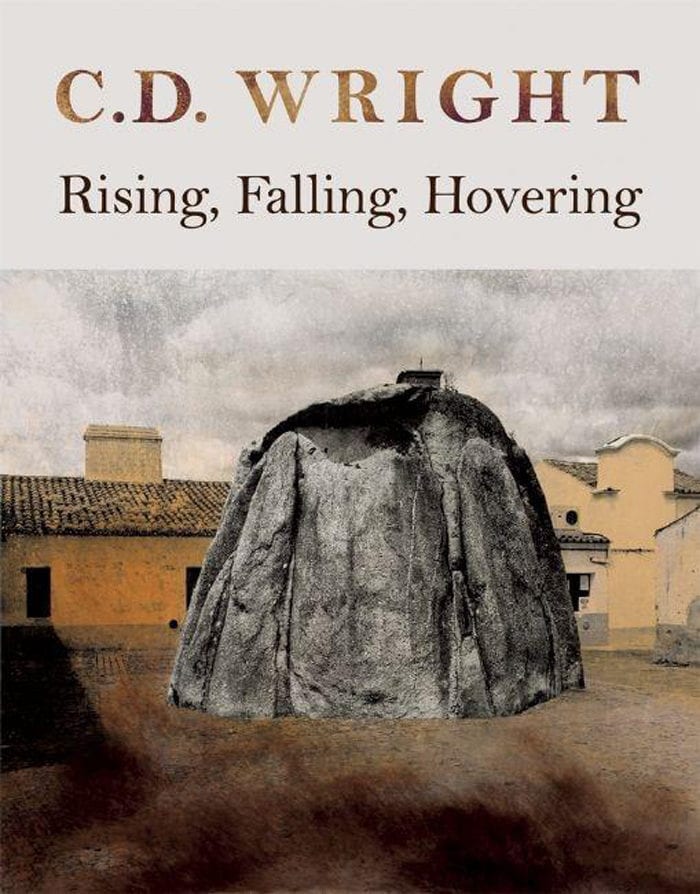 C.D. Wright, one of America’s most compelling and idiosyncratic poets, developed an unmistakable voice and penetrating vision. As Publishers Weekly noted in a starred review, “Wright [got] better with each book, expanding the reach of her art; it seems it could take in anything.”

Deeply personal and politically ferocious, Rising, Falling, Hovering addresses, as Wright said, “the commonly felt crises of [our] times”—from criminalized immigration and the specific consequences of empire to the challenges of parenting and the honesty required of human relationships.

Re: Happiness, in pursuit thereof

It is 2005, just before landfall.
Here I am, a labyrinth, and I am a mess.
I am located at the corner of Waterway
and Bluff. I need your help. You will find me
to the left of the graveyard, where the trees
grow especially talkative at night,
where fog and alcohol rub off the edge.
We burn to make one another sing;
to stay the lake that it not boil, earth
not rock. We are running on Aztec time,
fifth and final cycle. Eyes switch on/off.
We would be mercurochrome to one another
bee balm or chamomile. We should be concrete,
glass, and spandex. We should be digital or,
at least, early. Be ivory-billed. Invisible
except to the most prepared observer.
We will be stardust. Ancient tailings
of nothing. Elapsed breath. No,
we must first be ice. Be nails. Be teeth.
Be lightning.

“Various aspects of [Wright’s] current style can be compared to the work of certain of her contemporaries, but considered holistically, Wright belongs to a school of exactly one… Wright’s new poems take up a wide variety of thorny issues—the war in Iraq, the post-Katrina debacle in New Orleans, illegal immigration, the human consequences of global capitalism—but Wright understands it won’t suffice merely to tote up the soldiers wounded, levees breached, Mexicans arrested and jobs lost. She also has to consider the interdependent systems that rely on and engender those phenomena, the buried roots from which those statistics stem. And this is where Wright really shines… Wright doesn’t assert equivalences so much as she suggests parallels through repetition and variation, and through her formal structures… in that way, we become implicated: our participation is required in order for the poem’s meanings to unfold. That’s a disconcerting responsibility, but it’s also one that grants us great power. Our presence in the poem counts. And Wright calls us to account.” —New York Times Book Review

“In her first collection of new lyric poems since 2003, Wright braids some of her most personal and intimate poetry to date with an extended meditation on the consequences of America’s contemporary stance toward other countries… This book displays a new level of social and personal consciousness for Wright… who characterizes the powerful ambivalence that now accompanies life in America, where injustice may be the price of freedom, and where ‘poetry / doesn’t / protect / you / anymore.'” —Publishers Weekly, starred review

“C.D. Wright’s thirteenth collection, Rising, Falling, Hovering, reminds us what poetry is for. This is poetry as white phosphorus, written with merciless love and depthless anger, but it is ‘not a chemical weapon, it’s an incendiary… it is for illumination.’ Rising, Falling, Hovering is about conflict, local and global, and how failures of the heart bring disaster on every scale. In the long poem that anchors this book, Wright ties together the war in Iraq, the war on the poor, the challenges borders present, and family crises to create a portrait of the human soul riven by separateness. It is, primarily, a red-hot political epic, in which Wright states ‘to be ashamed is to be American’ and that ‘happiness is for amateurs.’ And yet, how can we react to a poetry this alive with invention and purpose but with joy? In Rising, Falling, Hovering, C.D. Wright wakes the reader—from dreams of both a perfect world and one drowned in horror—to the saving beauty of clear sight. Over a long career marked by deep moral engagement and constant reinvention, Wright has placed herself and her readers ‘at a crossroads’ as she writes, which is not just a place, but ‘the very instant you stopped looking for meaning and began rifling among the folds of feeling instead where things were to be made new again.'” —Judges’ citation, Griffin Poetry Prize

“When poetry is at its very best it is a form of communication that compels a response from its audience. That response can arise from anywhere on the spectrum of human emotion and psychology. Such is the case with the seminal verse of C.D. Wright as compiled within the pages of Rising, Falling, Hovering… [T]his latest and enthusiastically recommended collection is infused throughout with wit, honesty and emotional intensity, as it touches upon such diverse issues as technology, capitalism, existential crisis, and candid observation of the human condition… A thoughtful and singularly eloquent balance of social consciousness and appreciation for the wonders beyond human engineering.” —Midwest Book Review

“While she is attuned to our human minutia, Ms. Wright’s voice at times nearly booms like a prophet’s proclaiming the slide toward doom.” —Open Books: A Poem Emporium, May 2008 Newsletter

“Wright might be more agile a poet than any writer working right now… I imagine her with a magic wand, turning form into a frog, a butterfly, a stone, a pencil. The 50+ pages that make up the title poem? Nothing anyone could call a uniform style throughout, other than the style of urgency and a sort of frankness that seems heartless until you realize it’s nothing but heart… Insanely powerful, just perfectly written lines… Please, please: read this book. Buy ten copies. Send all your money to Copper Canyon for publishing such great writers over and over again.” —Corduroy Books

“There is no one like Wright… She has an uncanny and characteristic reverence for both the vernacular and the esoteric, which leads to riveting and rare depictions of American culture… It’s been a while since I read an entire book of poetry in rapture. After finishing Rising, Falling, Hovering, I was reminded of why I love the medium, what it can do.” —The Stranger

“Wright’s [poems] just keep going, changing shape as they do. So with voice contained by and transcending the lines, the voice is both hers and not hers, not anybody’s, and yet resonant and deeply pleasurable.” —Providence Journal

“Rising, Falling, Hovering… grapples with urgency. For Wright in these poems, in this country, it is inseparably private and public.” —Plain Dealer

“Wright… creates a poetry that approaches both Wordsworth’s ‘dream of a common language’ and an art form that might effect the change implicit in his plea for an acceptance of our common humanity.” —Beloit Poetry Journal

“Rising, Falling, Hovering… relies on variation and deft experimentation to create a world of swirling images… Wright creates emotional leaps that stick in the throat… And, like a long acid jazz set, the best of these poems are made up of evolving riffs that will hypnotize a loyal audience with their rhythms.” —American Book Review