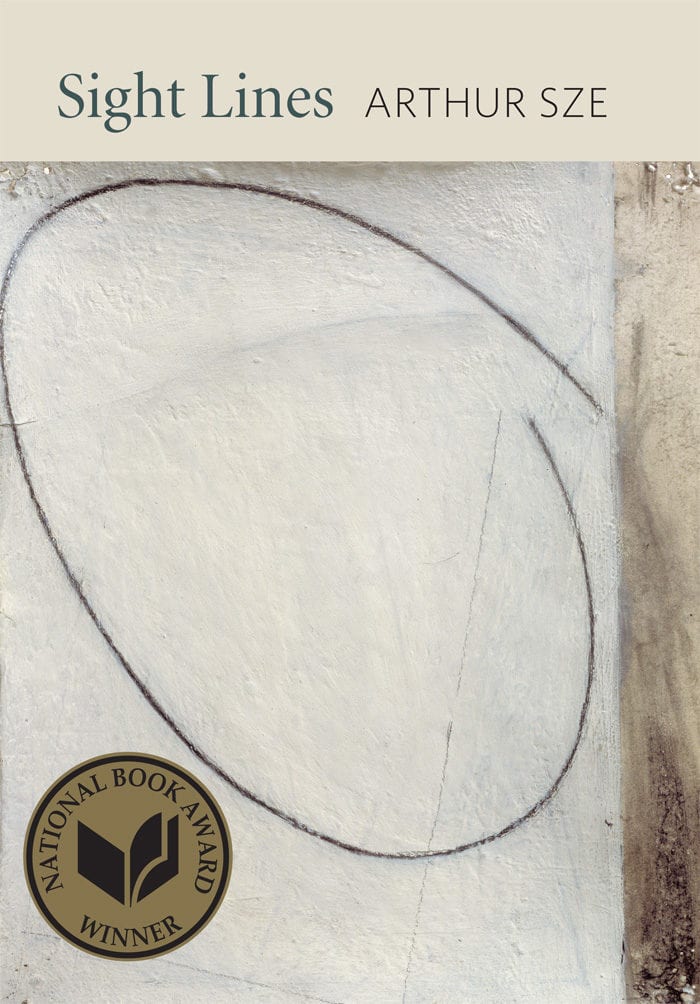 In his National Book Award-winning tenth collection Sight Lines, Arthur Sze lends the reader his prismatic lens, rendering contemporary reality in stunning complexity. Moments of grace, eros, and beauty are braided with shudders of terror and threats of ecological destruction, as Sze moves nimbly through intersections of the disparate and divergent. Using formal disruption, legible erasure, and a diversity of voices—lichen on a ceiling, salt on the table, a man behind on his rent—each page transmutes simplicity into simultaneity, and chaos into compelling song. Sze is a Pulitzer finalist and a widely-revered poet, whose exquisite craft continues to expand our view: there are “so many / worlds to this world.”

Green tips of tulips are rising out of the earth—

you don’t flense a whale or fire at beer cans

in an arroyo but catch the budding

tips of pear branches and wonder what

it’s like to live along a purling edge of spring.

Jefferson once tried to assemble a mastodon

skeleton on the White House floor but,

with pieces missing, failed to sequence the bones;

when the last speaker of a language dies,

a hue vanishes from the spectrum of visible light.

Last night, you sped past revolving and flashing

red, blue, and white lights along the road—

a wildfire in the dark; though no one

you knew was taken in the midnight ambulance,

an arrow struck a bull’s eye and quivered

in its shaft: one minute gratitude rises

another dissolution gnaws from a black center.

“Inside these poems of billowing consciousness, we too are alive to a spectrum of wonders.” —New York Times

“These new poems are stronger yet and by confronting time head on, may best stand its tests.” ―Literary Hub

“With a vast command of different fields of inquiry at his fingertips, Sze is able to construct poems brimming with meticulous perceptions, history, science, philosophy, and more, all while reaching unexpected insights. These are the poems of a person alive to the vastness of the landscape he inhabits (New Mexico and what the sky above it contains), to the threads of history (from deep time to the recent past), and the fluctuations of personal experience. What elevates these poems even higher is that they never settle into anecdote or description; they turn vision into the visionary. Sze is one of the finest poets of his generation and his work is finally getting the attention it has long merited.” —John Yau, Hyperallergic

“The wonders and realities of the world as seen through travel, nature walks, and daily routine bring life to the poems in Sight Lines.” ―Library Journal

“His poems enact the prodigious multiplicity and simultaneity of any one moment. The best way to show this may be to offer his technique in action, particularly evident in the title poem, in which time, place, danger, culpability, and desire blur and turn into one another in a temporal, sensory frisson.” —Virginia Quarterly Review

“An absolute marvel that is set to dazzle your notion of attention.” —Poetry & Poets

“It is this degree of self-questioning, this wariness of authority in himself and others, that makes Sze such a valuable poet for this moment.” —Colorado Review

“Arthur Sze is a demanding and valuable poet… While the influence of Eastern poetry is usually felt in American poetry as imagism, in Sze’s poems, that tradition is present not just as a quality of perception, but of thought—made available to us in all its complexity through a precision of language so refined that it feels like marksmanship.” ―Jacqueline Osherow, Antioch Review

“… a glory of images, layerings, and repetitions.” —Terrain

“These poems are remarkable in their stringency, the complex use of every gesture, move, and word. Arthur Sze offers us in Sight Lines a poetry that we will be reading for the coming years.” —Tupelo Quarterly

“My favorite poetry collection of the spring. The richness of his phrasing, the idiosyncratic rightness of his images and image-patterns, the bounce from personal to political to natural to erotic to mournful—these are some of his powerful tactics. But most compelling and most original, to my sense of things, is his technique of layering, of building a consequential poem out of sequential images, phrases, and gestures. There’s an original signature to the way he does this—with a kind of equalizing of value from one thing to the next, whether that is a tiny image or a global, even cosmic gesture. Each thing is—grammatically, cognitively, artfully, naturally—no bigger or smaller, no more or no less important than each other thing.” —David Baker, Kenyon Review

“In these poems, Sze calls upon every sense as vantage points flex between first, second, and third person and between poet and persona in ways that open Sight Lines to multiple narratives and multiple realities. In a collection where time and space collapse together and reform, sometimes mid-line, perspective matters… Sze’s sight lines can serve as one axis to center this faltering world.” —Lisa Higgs, Kenyon Review

“Sight Lines leaps between images to ask fundamental questions: where are we and what can we can see from here?”—Newfound

“This is an intense, occasionally unremitting book … Sze’s mind flickers over the natural world how humans inhabit and control the Anthropocene. The effect is to put the things he sees into sharp contrast and relief. Sze shows us with considerable efficacy and delicacy just how out of kilter that world is.” —The Manchester Review