Smoking the Bible is an arresting collection of poems thick with feeling, shaped by Chris Abani’s astounding command of form and metaphor. These poems reveal the personal story of two brothers—one elegizing the other—and the larger story of a man in exile: exile of geography, culture, and memory. What we experience in this emotionally generous collection is a deep spiritual reckoning that draws on ancient African traditions of belief, and an intellectual vivacity drawing on various wisdom literatures and traditions. Abani illustrates the connective geography between harm, regret, and release, as poems move through landscapes of Nigeria, the Midwestern United States, adulthood, and childhood. One has the sense of entering a whole and complex world of the imagination in reading this collection. There is no artifice here, no affectation; and these poems are a study in the very grace of image.

Wafer-thin pages brittle with words
and two brothers, one elder. The biblical,
unavoidable here. And there is the rub.
To come to self, to skin, is to rip away another, separate,
tear. Train snaking track, snaking thoughts – window as page, margin as
frame, what is kept within, what slips
away. From beyond the willow’s lazy bow into river,
beyond the crane stabbing for minnows in the
shallows, beyond the reflected sunlight, in a Cathedral
the tint of stained glass,
that addendum to light
that tempers it to grace.

Chris Abani is an acclaimed novelist and poet. His most recent books are The Secret History of Las Vegas, The Face: Cartography of the Void, and Sanctificum. He has received a Guggenheim Fellowship, the PEN/Hemingway Award, an Edgar Award, a USA Artists Fellowship, the PEN Beyond Margins Award, a Prince Claus Award, the Hurston/Wright Legacy Award, and a Lannan Literary Fellowship, among many honors. Born in Nigeria, he is a member of the American Academy of Arts and Sciences and … 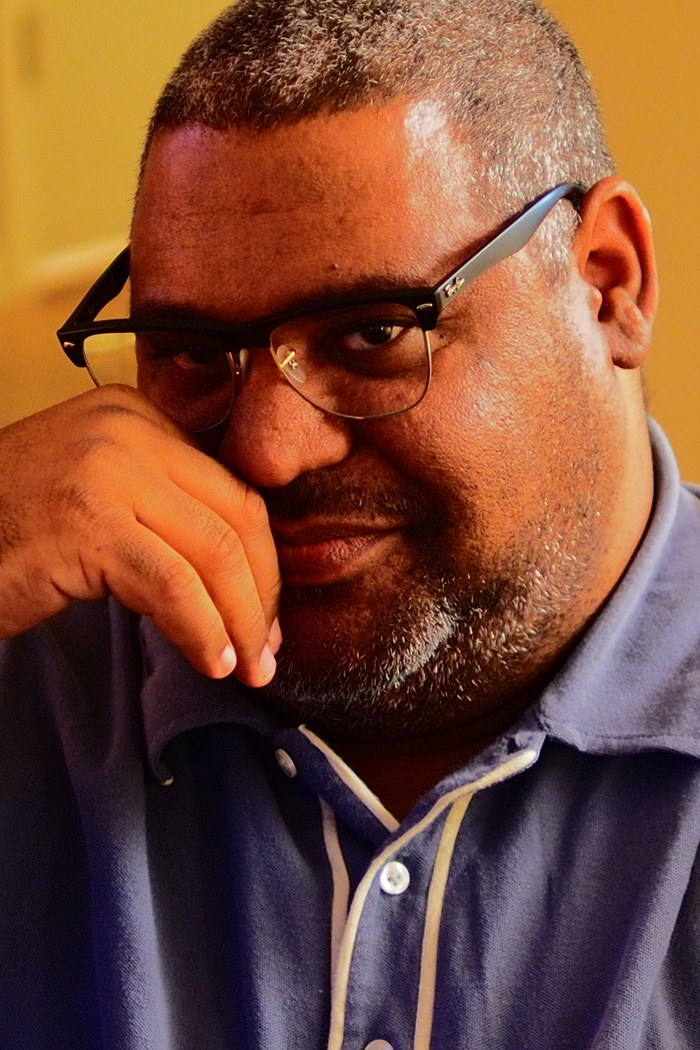 “Its energy, the audacity of Abani’s imagination, and most of all the breadth of vision . . . supplies its moral context . . . a feeling of thematic unity.” —New York Times Book Review

“Pliant and uncompromising, intellectual and organic, these brilliant poems are made of fire. I was enlightened by the flame and consumed by it.” —Terrance Hayes

“Smoking the Bible stands out with its emphasis on the importance of ancestral language and ritual practices, reminding readers that the joy of reading poetry is first and foremost the experience of language. Chris Abani takes us on a journey to an unknown destination, proving that solace is attainable even in the midst of personal tragedy” —Harvard Review

“These elegiac meditations on faith, heritage, masculinity, race, and familial loss are particularized in the manner of well-crafted fiction, while reaching beyond the afflictions of one man’s family to something vaster” —Harriet Books, Poetry Foundation

“Abani amplifies his personal sorrows to universal dimensions of compassion as he reflects on his experiences as a Nigerian whose bloodlines carry both the colonizer and the colonized and who grew up during the Nigerian-Biafran war, was imprisoned for his writing, and still carries ‘the weight of exile.’” —Donna Seaman

“These poems follow the story of two brothers and a man in exile; but reader beware: this award-winning poet’s
Chris Abani’s words can move anyone to their core.” —Shereads

“Smoking the Bible is a powerful, elegiac collection, eloquent with grief and forgiveness.” —North of Oxford

The elder is dying of sudden, terminal cancer. The younger is trying to account for who he is, immigrant-citizen in the United States far from his native southeastern Nigeria—they are Igbo—and the younger brother wants to account for the violence of their childhood, the toxicity of the masculinity they have known, and how it forged their bond. To lose such a sibling, the poems propose, is to lose half of a primal dialogue, and in this case it’s a dialogue that makes up part of the self the surviving brother is left to carry, missing forever the response and the call to his call and response.”—Jesse Nathan, McSweeney’s

“This new collection by Nigerian American Chris Abani—the celebrated, award-winning novelist, poet and professor—mines individual, cultural and geographic losses, creating a collection that is emotional and linguistically expansive. He explores “the personal story of two brothers—one elegizing the other—and the larger story of a man in exile” through poems that are spiritual, philosophical, personal and deeply affecting. Especially for those of us with more than one culture, the more we move through life, the more we must wonder: what do we belong to, and what belongs to us?” —Chicago Review of Books

“In this poetry collection, multidisciplinary writer Chris Abani takes the point of view of a person elegizing his own brother while living with the realities of exile — culturally, geographically, and emotionally. His work incorporates various artistic, intellectual, and belief traditions from Africa and across the world.” —Shondaland