Home > Books > The Book of Light by Lucille Clifton

The Book of Light 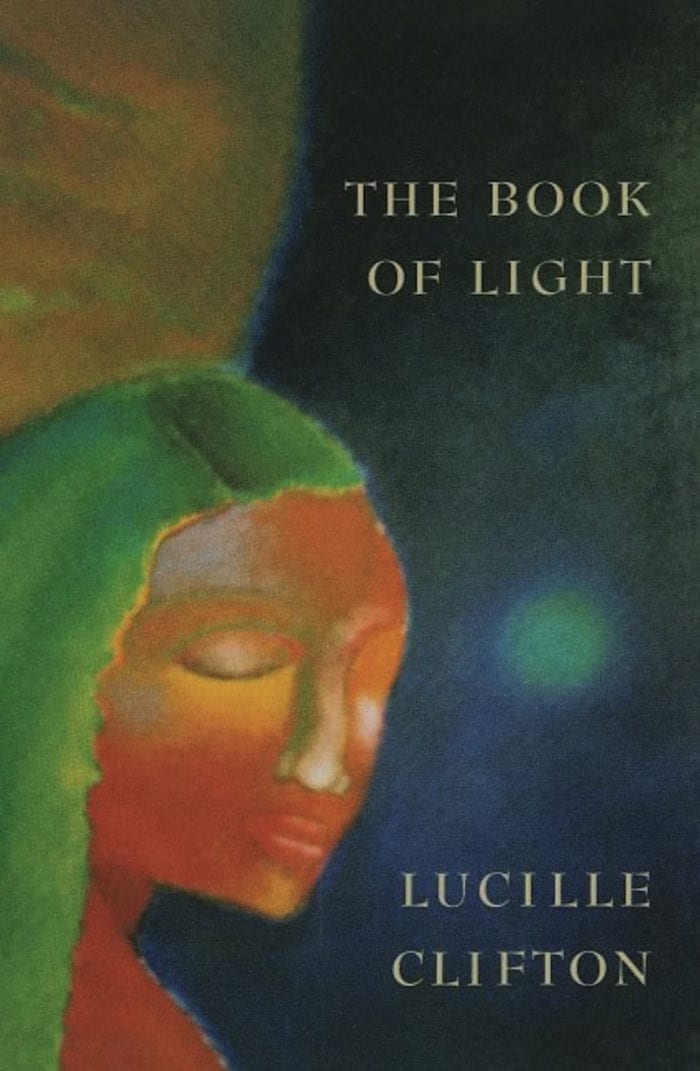 “Won’t you celebrate with me / what I have shaped into / a kind of life?” Lucille Clifton—one of the most important poets of the 21st century—published some of her most beloved poems in The Book of Light. The collection shines brightly into the shadows using Clifton’s formidable powers of revelation, her uncanny ability to locate the eternal in the midst of mundane experience, and to transform a vision into spontaneous song. Begging “the divine to speak,” Clifton discovers “the stillness that is god.” This book bears witness to a masterful poet’s awe and gratitude for a world of passionate discovery, compassionate anger, and devotion.

the girl fits her body in
to the space between the bed
and the wall. she is a stalk,
exhausted. she will do some
thing with this. she will
surround these bones with flesh.
she will cultivate night vision.
she will train her tongue
to lie still in her mouth and listen.
the girl slips into sleep.
her dream is red and raging.
she will remember
to build something human with it.

Lucille Clifton was born in Depew, New York in 1936, and educated at the State University of New York at Fredonia and at Howard University. She was the Distinguished Professor of Humanities at St. Mary’s College of Maryland and a professor of English at Duke University. Her awards included the National Book Award, the Juniper Prize for Poetry, an Emmy Award, and two nominations for the Pulitzer Prize in Poetry. 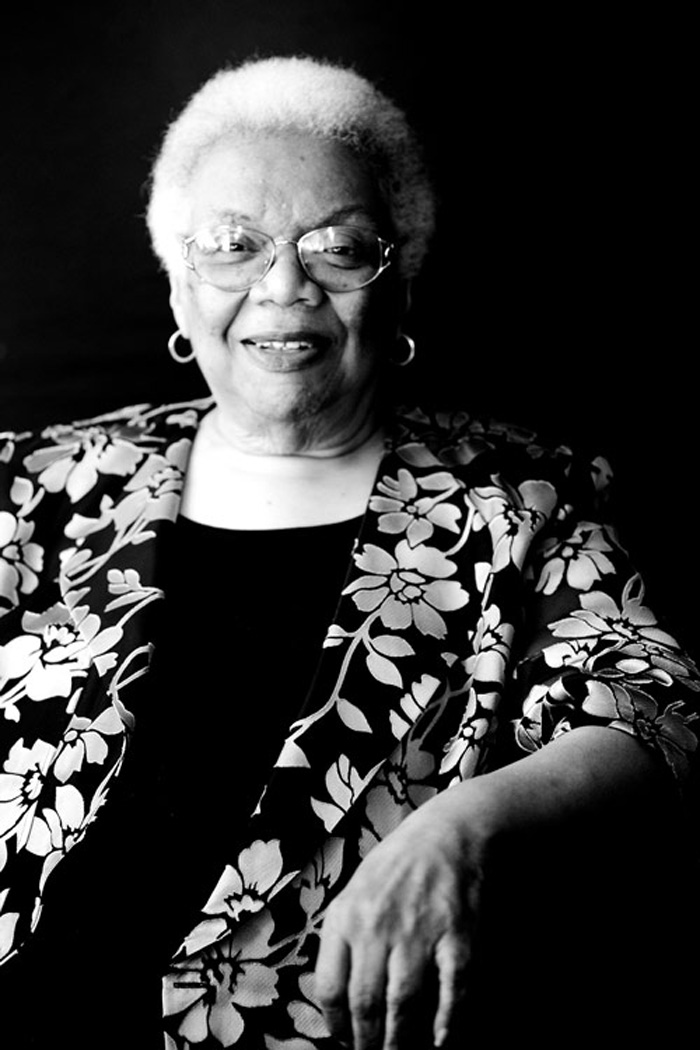 “A feminist version of Roots, charged with outrage at the sins done to women of previous generations… Low-key and poignant, poem after poem takes the form of a conversation, whether woman to her dead parents, Lucifer to God, or poet to reader.” —Publishers Weekly, starred review

“In its sweep, its consistency, and its power, this is one of Clifton’s finest works.” —Booklist

“Lucille Clifton is one of the four or five most authentic and profound living American poets.” —Denise Levertov

“Artful, intense, Lucille Clifton’s poems are made with an unerring ear and a burning mind.” —Adrienne Rich

“Her talent is inclusive. It is intuitive and conducted. It continues to be adventurous and unafraid.” —Gwendolyn Brooks

“If you like poetry, a poem by Lucille Clifton will eventually track you down. It will stand behind you tapping its foot until you turn around. Twice your height, the poem will fold its arms across its chest and tell you to wipe that silly look off your face and listen up. You will listen up… When you look at the poem, really look at it, you realize that here is a poem that will run into a burning building for you, throw you over its shoulder, and walk you out into cool air.” —Jenny Keith, City Paper

“Lucille Clifton always… keeps her feet on the earth, her mind in the world, and her heart wildly racing through life.” —Carolyn Kuebler, City Pages

“The Book of Light is a marvel. [Clifton’s] poems are alive: words rage, well with fury, murmur a sweet song or recall a half-forgotten memory.” —Karen Carnival, Feminist Bookstore News

“Clifton writes with the passion and grit of a born survivor… Her voice is grandiloquent and earthy, wise and sassy.” —Library Journal

“The work of a minimalist artist like Clifton makes empty space resonate… Clifton… defines herself without raising her voice.” —Alicia Ostriker, The American Poetry Review

“Clifton is one of our premier poets and an unequaled chronicler of life as an African-American woman. Her words and lines arrange themselves flawlessly on the page, building consummate images of rage, hope, and the human ability to overcome almost any obstacle… If you haven’t had the pleasure and challenge of celebrating with Lucille Clifton before now, I suggest The Book of Light as a helluva place to start.”—Chris Faatz, Artpaper

“[These poems] are written from the inside out and possess a hypnotic quality. What makes them hypnotic, as with much of Ms. Clifton’s poetry, is voice… The poems in The Book of Light have a soft tone—born of breath units, assonance, repetition, internal rhyme and Black dialect. That tone, although hard to describe, is suggestive of a mix of the Negro spiritual and the Japanese haiku.” —Diane Scharper, The Baltimore Sun

“In its sweep, its consistency, and its power, [The Book of Light] is a testament to the incredible imagination of a poet at the peak of mature artistry… Clifton rarely fails to astonish, delight, and surprise by the sheer depth and breadth of her vision… The Book of Light represents something rare and important, for Clifton has taken on the enormous task of probing the very essence of what it means to be human by exploring life through light in its various manifestations… And always there is the rendering of voice and validity to Black women, children and men that makes readers return to Clifton again and again for the healing power of her song… The Book of Light is the Book of Lucille—a gift of joy, a truly illuminated manuscript by a writer whose powers have been visited by grace.” —Andrea Lockett, Belles Lettres

“Lucille Clifton’s The Book of Light chronicles, illuminates, and clarifies some of the collective secrets of accumulated human experience. The poems are eloquent revelations of life within our contemporary culture. With tight, insightful language they build to a clarity of understanding, while plumbing the depths of pain to achieve forgiveness… Lucille Clifton’s work cuts a sweet edge to reality’s harsh truths… Clifton’s… verse lies fierce, small, and lovely on the page… Lucille Clifton’s work is informed by intuition and intellect, strength and gentleness.” —Lannie Cubley, Calyx

“Lucille Clifton celebrates for all of us her roots, her race, her quintessentially female, fierce, caring, creative selfhood.” —Maxine Kumin

“Clifton’s revelations about herself and her understanding of the difficulties of leading an examined life astound with the courage of their admission.” —Camille Cole Howard, The San Francisco Chronicle

“Ms. Clifton’s poetry is big enough to accommodate sorrow and madness and yet her vision emerges as overwhelmingly joyous and calm.” —Liz Rosenberg, The New York Times Book Review

“Clifton… illuminates her surroundings and history from within in a way that casts light on much beyond.” —Marilyn Hacker, Women’s Review of Books