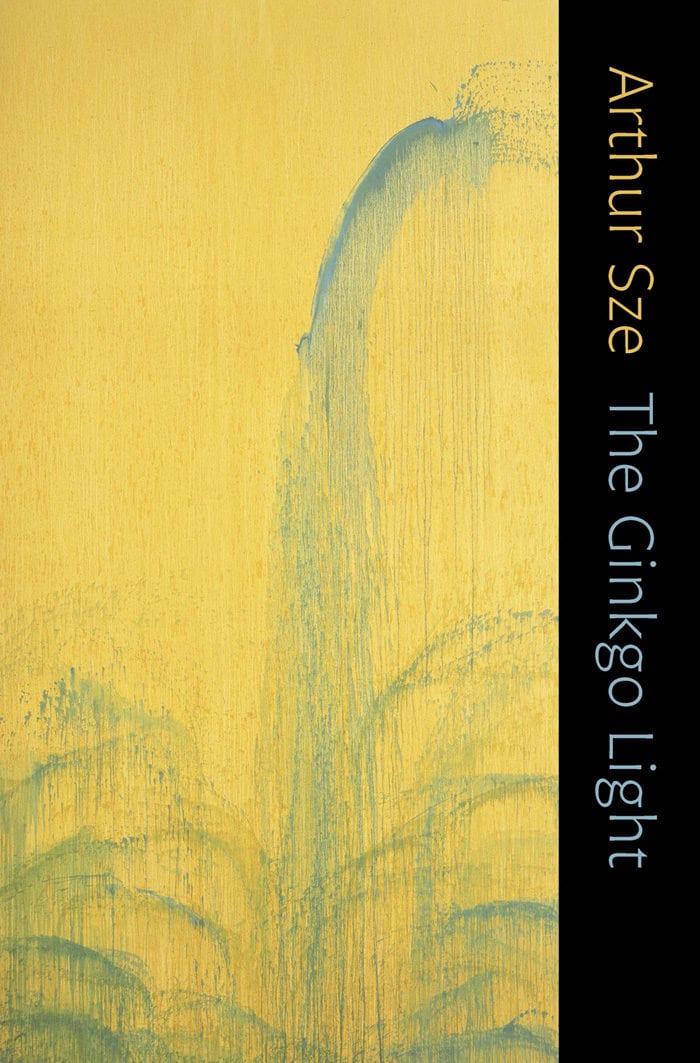 A temple near the hypocenter of the atomic blast at Hiroshima was disintegrated, but its ginkgo tree survived to bud and bloom. Arthur Sze extends this metaphor of survival and flowering to transform the world’s factual darkness into precarious splendor. He ingeniously integrates the world’s mundane and miraculous into a moving, visionary journey.

Looking back on the Muckleshoot Reservation from Galisteo Street, Santa Fe

The bow of a Muckleshoot canoe, blessed
with eagle feather and sprig of yellow cedar,
is launched into a bay. A girl watches
her mother fry venison slabs in a skillet—
drops of blood sizzle, evaporate. Because
a neighbor feeds them, they eat wordlessly;
the silence breaks when she occasionally
gags, reaches into her throat, pulls out hair.
Gone is the father, riled, arguing with his boss,
who drove to the shooting range after work;
gone the accountant who embezzled funds,
displayed a pickup, and proclaimed a winning
flush at the casino. You donate chicken soup
and clothes but never learn if they arrive
at the south end of the city. Your small
acts are sandpiper tracks in wet sand.
Newspapers, plastic containers, beer bottles
fill the bins along this sloping one-way street.

“In The Gingko Light, Arthur Sze’s ninth collection of poetry, he continues to bring together a wild and unlikely array of facts, observations, and memories, suggesting how tenuous is the interconnectedness of everything to everything else. He makes the reader aware of the intricacies of the radiant world, where the survival of the ginkgo tree—which was ‘once thought extinct’ and now grows in New York City—populates ‘the chasm between what I envision and what I do.’ It is that gap that Sze is always conscious of—the abyss between knowledge and desire, recognition and dream. Arthur Sze inhabits that place where feelings, thoughts and facts are in constant collision. He examines its unfolding slowly and patiently, always with a dispassionate eye, an awareness that mortality embraces us all. The result is a poetry full of love and generosity.” —John Yau, judge of the Asian American Literary Award in Poetry, 2010

“Sze’s sparkling ninth collection is largely obsessed with people, animals, plants and planets, caught in moments that suggest (without exactly revealing) their place in a cosmic order. In the first poem, ‘a praying mantis on the floor sips water,’ ‘an ex-army officer turned critic frets,’ a welder watches an overpass, ‘teenage girls compare bra sizes,’ ‘light from a partial lunar eclipse/diffuses down skylight walls;’ in the last ‘Cottonwood leaves / drift on the surface; a polar bear leaps off ice.’ In between, the images—as in the compound eye of a beautiful insect—add up to a persistent, even a single-minded, whole: Sze’s free verse emphasizes at once how difficult, and how necessary, it is for us to imagine our world as a system whose ecologies and societies require us to care for all their interdependent parts… at best, as he says, ‘we lift and turn the incidents until… we find their true and living place.’ Sze (Quipu) weaves southwestern sights, Native lore, pre-Columbian peoples and languages, and East Asian poetry and thought throughout his verse, along with almost photographic reports on things seen: for him ‘Memory is encounter: each incident, / a bee thrumming in a hive.” —Publishers Weekly

“Sze’s list-laden sequences capture the world’s manifold facts one by one, then through discursive commentary exact from them a sense not only of aesthetic order but of universal cause and effect.” —Boston Review

“Whether incorporating nature, philosophy, history, or science, Sze’s poems are expansive. They unfold like the time-slowed cinematic recording of a flower’s blooming… Sze has a refreshingly original sensibility and style, and he approaches writing like a collagist by joining disparate elements into a cohesive whole.” —Booklist

“Sze fuses elements of Chinese, Japanese, Native American, and various Western experimental traditions into poetry that, like the glaze of the finest porcelain, has enormous depth and subtlety. His work presents experience in all its multiplicity… Acts of observation establish the moral center of these poems, because every act of observation tempers epiphany with a chastening awareness of context.” —FIELD

“Sze… here captures the energy of life in overshadowed daily events… His poems mine everything from geography, history, and biology to philosophy and nature, interweaving them to create a complex and luminous poetic texture… His poetry is an experience of awakening and pleasure that all serious students of contemporary poetry should have.” —Library Journal

“Mixing an inventory of objects both natural and not… Sze re-presents the disparate parts of the world with devastating lucidity… In reading The Ginkgo Light, one is made increasingly aware of the possibility of seemingly limitless expansion with every poem.” —Virginia Quarterly Review

“… radically disparate images set adrift as loosely strung archipelagoes of language… Sze’s poetry invokes an ecology, or philosophy, of interconnectedness not unlike the central metaphor of Chinese Huayan Buddhism—the image of India’s net—where all phenomena are single jewels holding within themselves the infinite reflections of every other jewel in existence.” —World Literature Today

“Sze’s images and metaphors are fresh and dynamic, and again, the loose connections allow him to orchestrate a quotidian symphony.” —Rain Taxi

“In this luminous collection of poems, ‘each hour teems’ with movement and life, with darkness and wonder. Sze joins each subtle shard and detail and sets them just so, in the light of his expansive vision.” —Orion

“When he composes, Sze rearranges the order of the universe. This is a rare gift in a world that demands cold form, abstract touch, and a poetry absent of identity. The poems in [The Ginkgo Light] reaffirm that language will always be human and subjectively mysterious.” —Bloomsbury Review

“Sze mixes cultural and religious traditions (Western, Eastern, Native American) and recounts with equal precision and attention private pleasures and historic horrors, making of fractal cataloging a way of being and knowing: ‘the zigzag path to bliss.’ His poems are obsessed with part and whole.” —Shenandoah

“[Sze’s] inventorying impulse fills an important gap in the range of our common litanies, between the recitation of names to honor the dead and the proliferating begats of creation stories: it provides a testimony of living, of being in time… If only a few books were to survive civilization’s collapse, were to stand as ‘poems of evidence’ that life once flourished, I would hope Arthur Sze’s to be among them.” —Dana Levin, AGNI

“With dizzying agility, Sze quick-cuts personal references with the philosophical, nature with historical events, narrative with lyrical, list poems with elegy, and every now and then there is a gnomic statement that may or may not be undercut elsewhere… Very little is accidental in the poetry, yet the world, especially the personal trajectory of vision and experience, is quintessentially accidental: juxtaposition, then, is the primary rhetorical strategy.” —Maryanne Hannan, Cerise Press