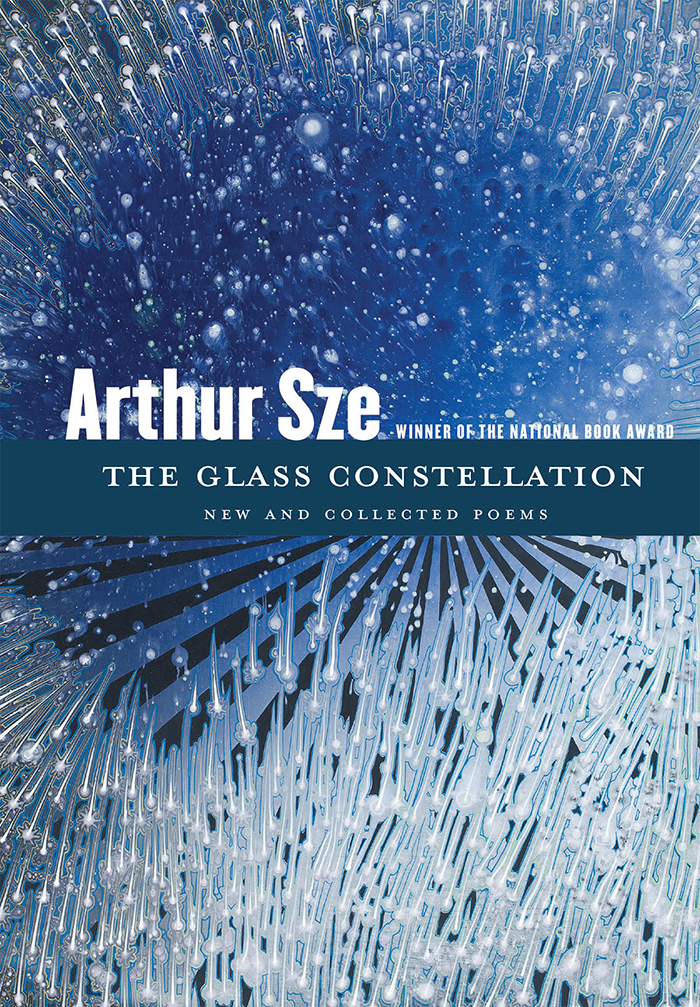 National Book Award winner Arthur Sze is a master poet, and The Glass Constellation is a triumph spanning five decades, including ten poetry collections and twenty-six new poems. Sze began his career writing compressed, lyrical poems influenced by classical Chinese poetry; he later made a leap into powerful polysemous sequences, honing a distinct stylistic signature that harnesses luminous particulars, and is sharply focused, emotionally resonant, and structurally complex. Fusing elements of Chinese, Japanese, Native American, and various Western experimental traditions―employing startling juxtapositions that are always on target, deeply informed by concern for our endangered planet and troubled species―Arthur Sze presents experience in all its multiplicities, in singular book after book. This collection is an invitation to immerse in a visionary body of work, mapping the evolution of one of our finest American poets.

Vanilla farmers in Madagascar sit in the dark with rifles;
at two a.m., after a thunderstorm,

I lurch down the hallway to check the oak floor
under a skylight, place a towel

in a pan. As if armed, waiting for a blue string
to trip a thief, I listen

in the hush at a point where ink flows out of a pen
onto a white Sahara of a page.

Adjusting the rearview mirror in the car before backing
out of the garage, I ask, What

is the logarithm of a dream? How do you trace a sphere
whose center is nowhere?

It is hard to believe farmers pollinate vanilla orchids
with toothpick-sized needles,

yet we do as needed; pouring syrup on a pancake,
I catch the scent of vines,

race along the circumference, sensing what it’s like to sit
in the dark with nothing in my hands.

“Sze writes gracefully about both the cosmos and the natural world, mining vivid imagery that performs exactly what Ezra Pound wrote an image should embody, namely, ‘an emotional and intellectual complex in an instance of time.’ One poem segues into the next, moving from book to book with leaping, lyrical reportage that erases the speaker’s ego but not his presence. Each of his poems is a proverbial drop containing the whole of the ocean of his poetry. . . . Sze’s steady outpouring of new work since 1972 testifies to the infinite inspiration of this seminal muse. Indeed, he has made new the ancient wisdom of Taoism’s self-renewing binary: ‘the Tao that can be told is not the Eternal Tao.’ The cosmic cynosure that is implicit in Sze’s title, The Glass Constellation, connotes radiance, reflection, and exquisite craftsmanship. It’s an apt metaphor for his transcendent poetry.”—Harvard Review

“Sze is a distinguished translator of Chinese poetry, and Asian poetic and philosophical traditions. Image-based juxtaposition, openness to chance, ego-shattering and interrogative thought, remain central to this practice. The empirical and theoretical knowledge of the physical world, of which Sze has a remarkable range, enriches rather than competes with our emotional engagement. Theorems of geometry and physics (as in ‘The Angle of Reflection Equals the Angle of Incidence’) are pondered as much for their spiritual as for their epistemological potential. This is a fresh kind of environmental imagination, with none of the stagy Thoreauvian ‘contact’ with unmediated Nature, or Emersonian summation of the ‘All’. And yet, with full humility and wonder, the sense of the sublime does often arise, with its perplexing interplay of the minute and the vast, and its mixture of pleasure and terror, order and rupture.” —PN Review

“A new cornerstone of the Asian American poetic canon, Arthur Sze’s career-spanning book collects early adaptations of classical Chinese poetry, his signature terrain-traversing sequences, and new work written in lines like microscope slides, long and translucent, each one isolating a single clarified perception: “adjusting your breath to the seasonal rhythm of grasses— // gazing into a lake on a salt flat and drinking, in reflection, the Milky Way—.””—The Boston Globe

“Arthur Sze’s poetry … is a multilayered experience that opens out like a slow-motion blossoming where the end is only the beginning.”—  Sheri Sherman Cohen, Obdobja Symposium, University of Ljubljiana, Slovenia

“Irradiated, iridescent, Sze’s poems offer a way to see without seeing darkly … Sze testifies again and again to the pareidolic and pattern-seeking qualities of the mind, its aggregating tendencies, indiscriminate and magpie-like, confirming Ralph Waldo Emerson’s sense that “there is a property in the horizon which no man has but he whose eye can integrate all the parts, that is, the poet.” — West Branch

“Ten other collections of poetry live here titivated by 26 new poems, all of them marked by the manners that have always permeated Sze’s work: Zen-like wonder at the tiniest of moments that invariably take strong left-turns into new worlds” — New York Journal of Books

“Arthur Sze offers a stellar collection of lyrical poems that captivate the reader’s heart … This is a volume I feel very fortunate to have encountered. I am living with it. You will want to as well.” — World Literature Today

“There is an immense silence, or the clearest crystal-toned ringing, that emanates from the nearly three hundred poems that comprise Arthur Sze’s The Glass Constellation: New and Collected Poems. This incandescent collection by one of our time’s most masterful poets is an invitation for us all to see ourselves, our lives, this earth, and one another in clear, attuned radiance” — The Georgia Review

“Poetry, for Sze, is a way of coming to terms with the world, for which the strange feeling of being in this world always outruns our understanding of what it means to be in this world. His poems, in their lush enigma, replicate our lived encounter with the shimmering contours of this life.” — The Adroit Journal

“The nets of awareness Arthur Sze casts across the world are large and light and buoyant. Their mesh is fine, but they also have tremendous flexibility and tensile strength and can stretch and stretch and stretch and stretch. They gather in assemblages of reality astonishingly various in kind and size. In Sze’s poems, multitudes of oppositions—between a spare and a baroque sensibility, between minute particulars and large general truths, between the experimental and the perennial, between concretion and abstraction, between image and sound, between the quotidian and the eternal—are composed and reconciled through a subtle, ever-present, ever-active interweaving of perception, apperception, and piercing insight.” — Shelley Memorial Award: Judges Citation, Poetry Society of America

“The recognition was long overdue when Sze won the 2019 National Book Award for his previous book, Sight Lines. This 500-page, career spanning retrospective is a fitting follow up, allowing readers to take in the full breadth of what Sze has achieved over ten collections published since the early 1970s. There are so many kinds of poems here, and so many truly extraordinary ones… This book is an overwhelming feast, a treasure, and more than enough proof that Sze is a major poet.” —Craig Morgan Teicher, NPR

“A monumental collection from a poet whose lasting importance should now be recognized; essential for dedicated readers of contemporary American poetry.”—Library Journal, starred review

“In the case of poet Arthur Sze, ‘master’ is no misnomer… Sze as poet has been continually searching for new ways of making poetry alive, to make way for the breathing infrastructure of the poem in all its fragility and rigor. As a result of his dynamic poetic efforts, the map of human consciousness will have grown more detailed.” —Kyoto Journal Review

“Sze’s is a poetry that attends to and constellates the world’s wildly disparate and endless instances of ‘once.’ The Glass Constellation is a beautiful and important testament to the significance of that endeavor, an important illumination in poetry’s cosmic vault.”—On the Seawall

“Packing the whole world beautifully into expansive lyric poems by shaping the experimental trajectories of thought, feeling and experience in moment-to-moment transcriptions, all in the service of love and generosity of awareness—is quite a life’s work! Arthur Sze achieves this over and over again in ever-changing, revelatory poetry which we need more than ever.”—John Evans, Diesel Books

“…Arthur Sze’s exquisite complexities—his work is often at the nexus of modernism and spiritual contemplation—are intellectual and compassionate, and altogether unforgettable. He is a verbal architect, employing sharp and memorable connections to craft wildly exciting yet fully grounded experimental works through the frictions and contradictions of language, ideas and imagery.”—Chicago Review of Books

“… the pages bear meaning of the poetry so moving that they take on a life of their own, flowing through or rather “collapsing” into other images, obliging the writing process even. In turn, this urges the reader to connect, to feel along with this very process, to finally “expand” the threads of meaning through discovery.” —Tinderbox Poetry Journal

“Sze is simultaneously the microscope and telescope of the poetry world. And more. To truly attend to these poems is to begin to feel like you have been opened to a kaleidoscopic experience of the cosmos, a multisensual one whose kinetic foci gather moments across time and space, word and world. . . . The Glass Constellation is a sublime and masterful embodiment of a kind of cosmic consciousness.” —Terrain

“Sze’s achievement is considerable… [his] images are sharply in focus, like computational photography, his sensibility presents us with a vision that is surreally hyper-aware. The Glass Constellation is edifying in its freshness, confident in its approach, and winningly modest in its adjustment of the sublime.” —The Cortland Review