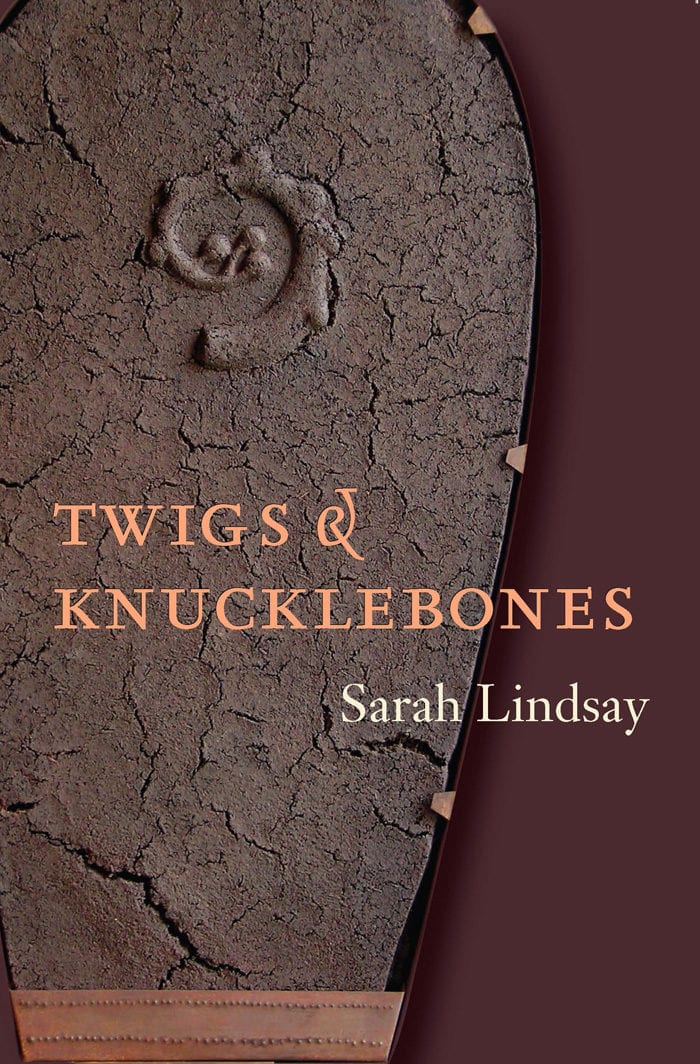 Quirky, macabre, vivid and spellbinding, Sarah Lindsay’s Twigs & Knucklebones melds science and art with astonishing facts that just might be true: spadefoot toads singing until their throats bleed; an explorer tumbling into an Antarctic crevasse and swinging from his tether like a pendulum; a young girl playing a house like a trumpet. At the heart of the collection is an extended poem about Nab, a fictional kingdom populated by megalomaniac archaeologists, jerboas, goatherds, and the strange god Nummis. Sarah Lindsay’s poems often span—in the space of a few lines—centuries, cultures, and contexts, as they open to new worlds and unveil new ways of seeing that are undeniably grounded in the present.

I know how little I know
from observation:
that the dog sleeping on the rug
with pure concentration
will be sleeping, each time I look up,
in a different direction,
that five wart-lidded mushrooms
can form on the lawn
in the time rain takes
to shift from falling to fallen,
that my eyes are too slow
to track shooting stars, too quick
to spy continental drift,
and Earth conceals its spin
by spinning me with it,
that a tree won’t let me
see its growth, only its height,
that hairs on my head go singly gray
only by night.

Copper Canyon has published two books by former Lannan Fellow Sarah Lindsay: Twigs and Knucklebones (chosen by Poetry editor Christian Wiman as a “Favorite Book of 2008”) and Debt to the Bone-Eating Snotflower (a 2013 Lannan Literary Selection). Her previous books, both in the Grove Press Poetry Series, are Primate Behavior, a finalist for the National Book Award, and Mount Clutter. She is a recipient of the J. Howard and Barbara M.J. Wood Prize. Sarah has worked as a copy … 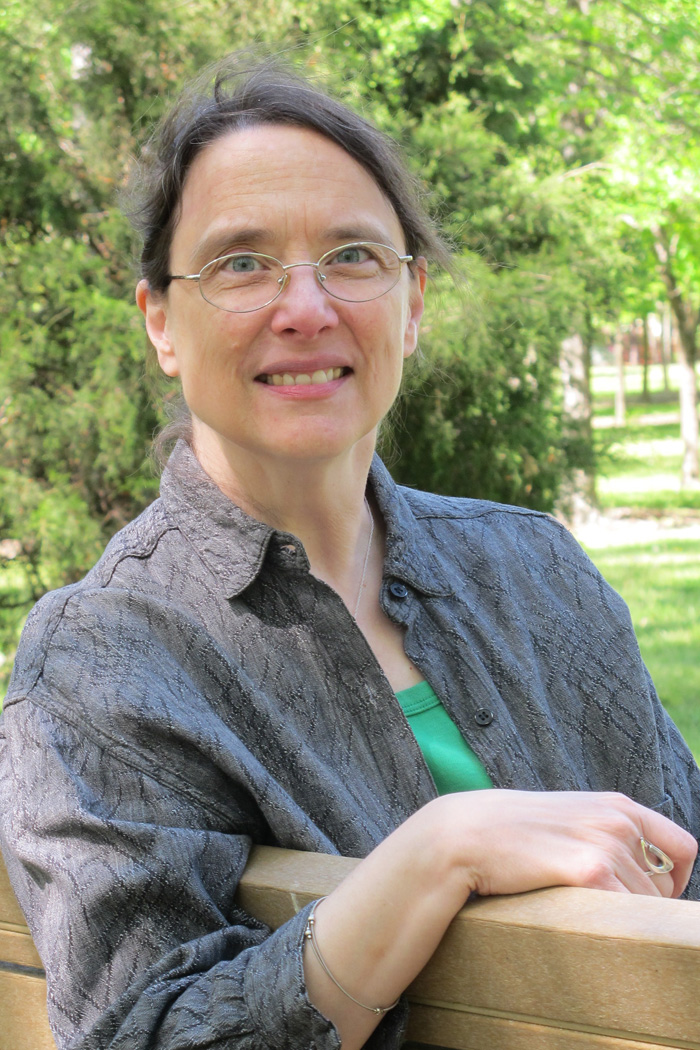 “Sarah Lindsay’s new book is unusual among books of contemporary poetry for several reasons. It’s almost completely devoid of the first person pronoun, for one thing. Most of Lindsay’s poems are historical or (as in the stunning sequence ‘The Kingdom of Nab‘) pseudo-historical. One of the most memorable poems in the book is a strange, moving piece called ‘Elegy for the Quagga.’ A Quagga was a zebra-like creature which was hunted to extinction in the late nineteenth century. Lindsay links this extinction with the eruption of Krakatoa in Indonesia, and by the time you finish this poem you realize you’re never going to hear this sound that is the poem’s subject—and yet you’re now dying to. The poem ends ‘a kind of horse, less picture-esque than a Dodo, still we mourn what we mourn, even if when it sank to its irreplaceable knees, when its unique throat closed behind a sigh, no dust rose to redden a whole year’s sunsets, no one unwittingly busy two thousand miles away jumped at the sound, no ashes rained on ships in the merciless sea.'” —Christian Wiman

“Had Dr. Dolittle fathered a prodigious daughter, she might well be behind the bizarre and entertaining personae found on the pages of Lindsay’s first-book bestiary… Lindsay’s dark-edged, sometimes creepy poems are also imbued with a buoying sense of respect for the different, the unexpected and the challenging… In work reminiscent of Amy Clampitt and of Albert Goldbarth, Lindsay weaves informed and moving lyric claims around scientific facts, lamenting extinct species or following local rivers.” —Publishers Weekly

“Writer and reader alike enjoy the privilege of superhuman knowledge in poems that blur the line between the apocryphal and the real world… Lindsay’s poems… are impressive in their attention to detail. Each event, however small, is given weight and understood in the larger context of humanity.” —Foreword

“Sarah Lindsay… uncovers a curio cabinet of delights that illuminates, as if from within, the intricate links between people and their origins.” —New York Times Book Review

“Twigs & Knucklebones is a rare thing in poetry—a very good read… [Sarah Lindsay’s] voice… is omniscient yet intimate, super-literate and flawlessly graceful, like a really good lecturer who knows how to entertain an audience while speaking on complex subject matters.” —Poetry Foundation

“One doesn’t need a paintbrush to create art. Twigs & Knucklebones is the work of an accomplished and skilled poet.” —Library Bookwatch

“[Lindsay] is literary, learned, acerbic and funny, as well as possessive of more than a little tenderness, the quality that is historically least in evidence but most in need for her subject: the extreme decentering of human wishes and the chilly specter of Mother Nature Redux… As Emerson noted there are two tribes contending for our culture, the Party of Hope and the Party of Memory; Sarah Lindsay is a member of the former… Lindsay’s hope is not a secular paradise where human progress finds its true Jerusalem; she subscribes to the sense that ‘hope,’ whatever else it is, is an evolutionary trait… Is there somehow a fear of extinction lurking in her poems? If there is, there is nothing to be gained by not looking catastrophe in the eye… To Lindsay’s eye, history is corrosion; impact craters pile up until the planet’s surface is as pitted—and significant—as a bad case of acne.” —Cortland Review

“With wonder and bemusement, Lindsay writes supple, sparkling poems about life’s perpetual coalescence and breaking down… The heart of this mordant yet profoundly compassionate book is a vivid and involving series about the fictional ancient kingdom of Nab. Here Lindsay sifts through the detritus of a civilization, imagines the inner worlds of people long gone, and the layering of tomb upon tomb, city upon city as bone, clay vessels, and the inscribed tablets are all crushed into splinters and shards.” —Booklist

“The poems in… Twigs & Knucklebones are field guides to wholly imagined, anti-metaphorical playgrounds; they are experiments in inverted dramatic irony; they are elaborate tales you want to be true. Reading her book is like talking to your glamorous older brother: you want to believe his stories, to think he’s telling them just for you—though mostly you want him to keep talking.” —storySouth