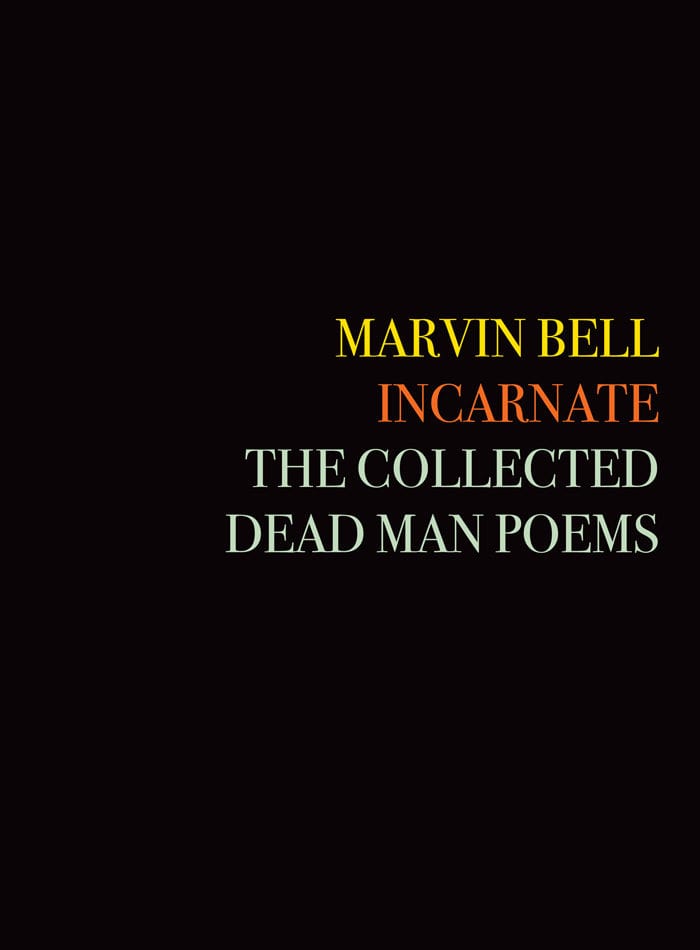 The Dead Man, Marvin Bell’s brilliant poetic invention, is an overarching consciousness, alive and dead at once, defeating time. Mystical and anonymous, The Dead Man offers searing insight into the joys, as well as the catastrophes, of fluctuating cultural and political moments. Incarnate draws from all of Bell’s previous collections where The Dead Man appeared, and adds an abundant cache of new poems that resonate with “the dark matter and sticky stuff” of life. As David St. John writes in his introduction, “No voice in our poetry has spoken with more eloquence and wisdom of the daily spiritual, political and psychological erosion in our lives; no poet has gathered our American experience with a more capacious tenderness—all the while naming and celebrating our persistent hopes and enduring human desires.”

The Book of the Dead Man (His Papers)

1. About the Dead Man’s Papers

The dead man remembers paper.
He remembers roller skate keys and fruit box scooters, typewriter ribbons
and swamp coolers, and lots and lots of paper.
Paper stained by words and telltale commas.
He could spot talent in a writer’s commas.
There were meanings, there were diagrams on the ball field that told the
players where to run, there were lines in the dirt that paralyzed
a chicken.
There was crumpled paper holding words that would never be released.
And there were blackouts in the national files so that documents attesting to
the criminality of officials became graphic illustrations of barrier art.
The dead man tore paper in the fashion of atomic dispersals.
He burned paper in the fashion of cremation.
He balled-up the good ideas that were too late and the personal confessions
of friends.

2. More About the Dead Man’s Papers

He took the papers of the famous, and what he knew, to his grave.
The dead man blots paper of its blood and its tears.
He tapes together the halves that were torn apart in anger and secretes them.
He relieves the insecure.
He drops a dime on the drafts of the dull, the lightweights, the minor
laureates.
The dead man loves the shredder and incinerator.
He buries treasure but leaves no maps.
Everything in dead man’s space is an X, you yourself can name it.
There is a word for each X, a site specific, an open vise.
Stick your neck out if you like.

“While the Zen admonition—Live as if you were already dead—may embody a lively challenge, these poems, too, tip their hats with greatest respect and fanciful care for the living mystery that holds us all.” —Naomi Shihab Nye, The New York Times

“I feel this book is a masterpiece, one of a handful of essential books in American poetry in the last 50 years.” —David St. John

“…In the meditations of this timeless Everyman, a wisecracking poet-philosopher who comprehends the human condition in all its complexity, we may see the world anew… Incarnate is a book for the ages.” —Christopher Merrill

“Marvin Bell’s Dead Man poems should close out any anthology of the twentieth century and open any anthology of this new century’s work. They change the game. They insist that we pay a new and different kind of attention.” ―Georgia Review

“His poems are philosophical, concerned most often with the pairing of life and death, which he ponders with a reliable frankness and, over the years, an increasing sense of liberation.” ―Booklist

“A book to make our aches more pointed, to give them a deeper sense of purpose… In our troubled times, one could do much worse than to be a companion to Marvin Bell’s Dead Man.” —Kenyon Review

“[Dead Man poems] are by turns cosmic and earthy, dubious and faithful, determined and resigned. Deeply funny and comically humane, they remind us that life in this world embraces contraries.” ―Pleiades

“With the rhythms of a modern-day prophet, Bell creates a universe of one, recasting Whitman’s ‘Song of Myself’ to mirror the present age.” ―Publishers Weekly