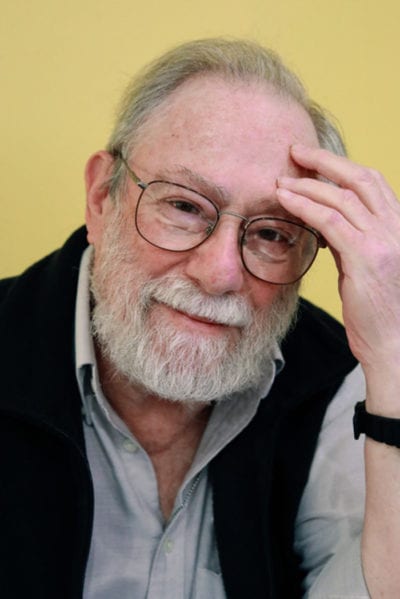 Marvin Bell, author of twenty-three books of poetry and essays, has been called “an insider who thinks like an outsider,” and his writing has been called “ambitious without pretension.” Reviewing The Book of the Dead Man for The Georgia Review, Judith Kitchen noted: “These new books by Marvin Bell are doing to poetry what has occasionally been done before—sending it into new and original territory. Bell has redefined poetry as it is being practiced today.” His latest books are After the Fact: Scripts & Postscripts, a collaboration with Christopher Merrill (White Pine); Vertigo: The Living Dead Man Poems (Copper Canyon); Whiteout, a collaboration with the photographer Nathan Lyons (Lodima); and a children’s book with illustrations by Chris Raschka, A Primer about the Flag (Candlewick). These books were preceded by the wartime collection, Mars Being Red, and 7 Poets, 4 Days, 1 Book—A Collaboration of Poets from Five Countries. A song cycle, “The Animals,” premiered in 2009. His poems, his teaching, and his column in The American Poetry Review, “Homage to the Runner,” have influenced generations of poets.

Award in Literature, American Academy of Arts and Letters, 1994