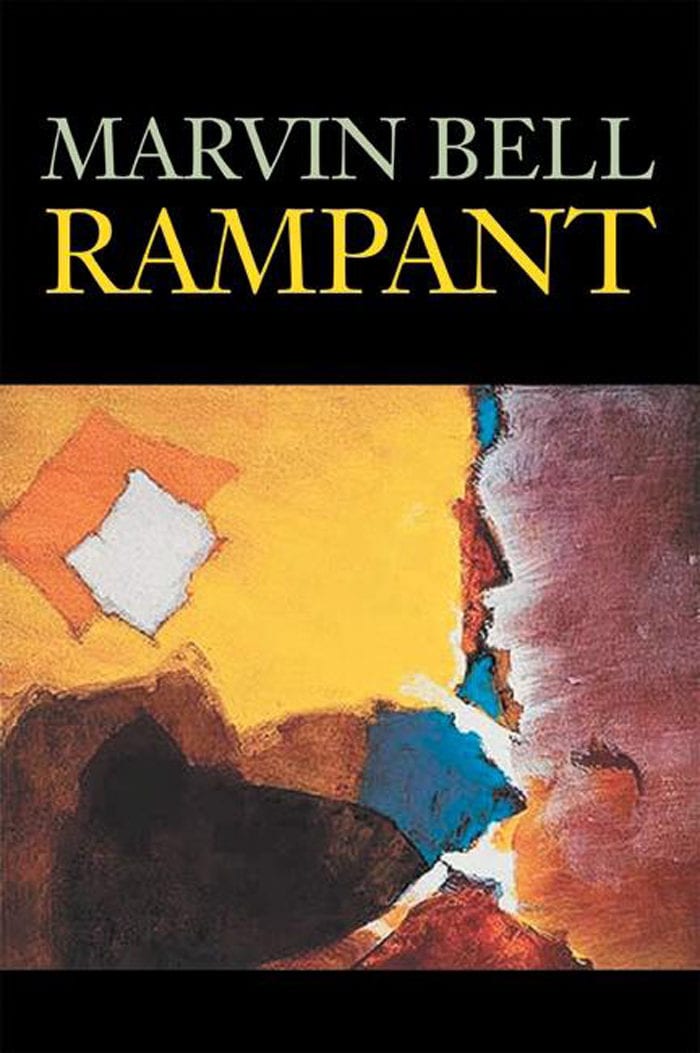 Marvin Bell’s uninhibited imagination and often gritty curiosity have always taken on wildly diverse subjects. In these new poems he ventures far and near, from war in the Middle East and famine in Sudan, to surfing in Hawaii and life in Catatonia. In Rampant, the ancient Greeks are at the horizon, the crab boats are tethered to the pier, Louis Braille is being re-entombed, Vaccination Day has arrived, and parasites discuss us in the future. Bell has said he “likes ideas to have a little dirt on their shoes.” By the conclusion of Rampant, his shoes are well-traveled. The suite, “Journal of the Posthumous Present,” was commissioned by the Getty Research Institute and featured on the cover of American Poetry Review. Remarkable for its formal approach and its socio-philosophical investigation, it is simultaneously groundbreaking and characteristic of this unique poet’s long, distinguished career.

In Beirut, at the Worst of It

In Beirut, at the worst of it,
four men in their twenties play Russian roulette.
They sit in a black, derelict sedan, discarded
in a no-man’s-land awash in stone,
once the facades of buildings—now leaning
to host a meandering barricade.
The cheap revolver they handle is heavier than it was
an hour ago when they set out.
It looks worn, as if the safety may not hold
or one might pull a misfire at the worst moment.
They hand it around with figs and an apple.
They have nothing to lose
and each takes a bite of the apple in turn,
then quickly places the barrel to his temple
and pulls the trigger. After four clicks,
they discuss whether or not to continue.
A jeep goes by but doesn’t care to stop.
They live in a world fingertips cannot touch.
Some fatigues are boredom. Much is withheld.
One of them grabs the revolver into the back seat
and spins the chamber. “My turn,” he says.
He has woken from fever to find a cold hell.
There are burns behind the forehead that do not smoke.
While the talk continues, one of them from a napkin
makes a bird you can make the tail wave on.

“When Marvin Bell, in his excellent new collection of poems, writes the totally characteristic line ‘His spine quivers like a long quill, quite like it,’ it’s worth considering what that ‘quite like it’ might be doing there. Verbally and rhythmically it functions as a sort of heart murmur, a shrug or flutter after the main pulse of the line. This is Bell’s territory in miniature: echo, aftermath, a looking backward through the veil of things… As a poet in the office of student or historian of consciousness, Bell performs beautifully, like a less sleek Wallace Stevens… This is sympathy, the real thing.” —New York Times Book Review

“A resurgent lyric voice marks Bell’s first all-new collection since the ‘Dead Man’ personal poems of the 1990s… Bell’s speaker pulls himself up into a high, dim realm of intelligence, hard to paraphrase and willfully poetical.” —Publishers Weekly

“[A]stonishingly smart and evocative… his best book, a major contribution to our poetry… a book of truly visionary sweep.” —Prairie Schooner

“For a man of literature who has authored 18 books, Bell dispenses truth in Rampant by not attempting to claim sole ownership. But it is there, carried by the art of poetry and being blown about like ashes on the wind.” —Home News Tribune

“When a major poet comes out with an exceptional book of poetry, we are inclined to think of that book as a culmination, but insofar as such estimates have about them an air of tragic finality, I’ll call Marvin Bell’s Rampant instead a book of culmination without end.” —William Olsen, Shenandoah

“Bell’s poems are… poems of intellectual bite, of intricate philosophical commitment, yet they don’t turn their backs on the emotional fullness of everyday human concerns. [They] are a kind of deepening creation of a very signature style.” —Albert Goldbarth, Wichita Eagle

“Marvin Bell has the largest heart since Walt Whitman… Bell’s determination to address historical atrocities and to expose their perpetrators is admirable.” —Harvard Review

“Bell has redefined poetry as it is being practiced today.” —Georgia Review

“[Marvin Bell’s poetry] will fascinate those interested in seeing what language can sometimes do in the hands of an expert.” —Booklist