Home > Books > The Book of the Dead Man by Marvin Bell

The Book of the Dead Man 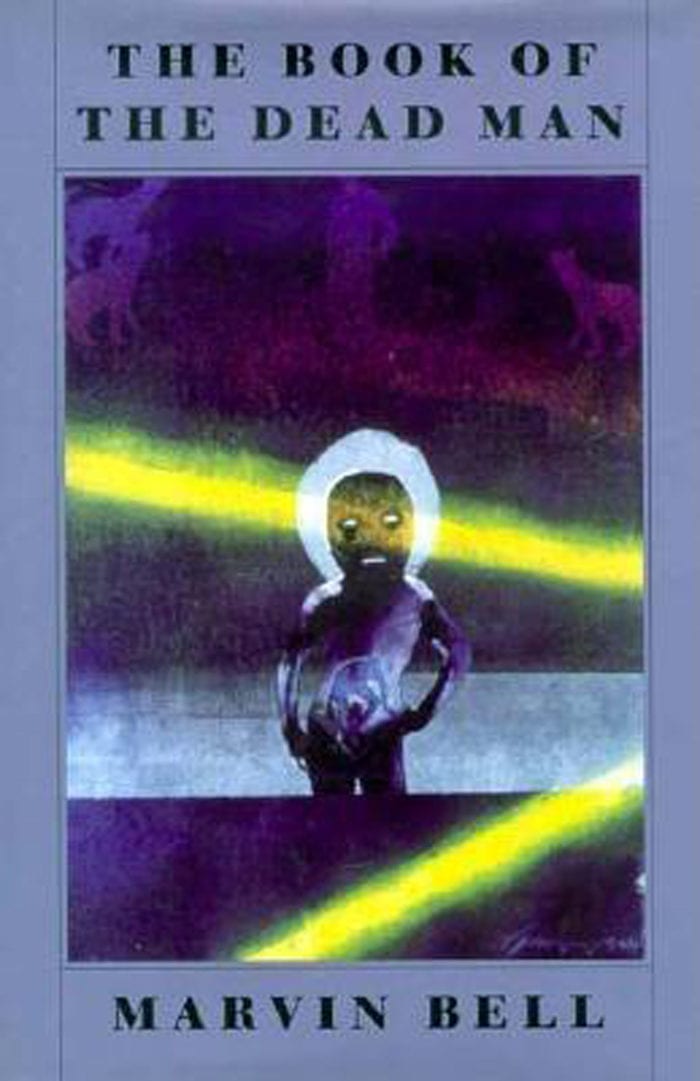 Celebrated poet Marvin Bell’s ninth major collection of poems is his most provocative and imaginative to date. Exploring the wisdom and genius of ignorance, fallibility and mutability with Zen-like detachment, Bell’s new poems respond to the admonition, “Live as if you were already dead.”

About the Dead Man

The dead man thinks he is alive when he sees blood in his stool.
Seeing blood in his stool, the dead man thinks he is alive.
He thinks himself alive because he has no future.
Isn’t that the way it always was, the way of life?
Now, as in life, he can call to people who will not answer.
Life looks like a white desert, a blaze of today in which nothing
distinct can be made out, seen.
To the dead man, guilt and fear are indistinguishable.
The dead man cannot make out the spider at the center of its web.
He cannot see the eyelets in his shoes and so wears them unlaced.
He reads the large type and skips the fine print.
His vision surrounds a single tree, lost as he is in a forest.
From his porcelain living quarters, he looks out at a fiery plain.
His face is pressed against a frameless window.
Unable to look inside, unwilling to look outside, the man who is dead
is like a useless gift in its box waiting.
It will have its yearly anniversary, but it would be wrong to call it a
holiday.

“At first one wonders, ‘Who is the dead man?’ but it becomes clear as these eloquent and powerful poems accumulate that the dead man is our collective conscience, a witness to everyday joys and historical atrocities, the former so we do not miss them, the latter so we do not hide them from ourselves… This is the strongest book of poems I have read this year.” —Virginia Quarterly Review

“T.S. Eliot meets Allen Ginsberg… This collection will fascinate those interested in seeing what language can sometimes do in the hands of an expert.” —Booklist

“In this new work it is not only the Dead Man, it is poetry itself we see in the act of self-resurrection from the ash of our contemporary literary landscape.” —David St. John

“Marvin Bell has consistently produced highly skilled, deeply touching poems with a solid intellectual presence… [With] The Book of the Dead Man, he has perhaps reached an apex.” —Bloomsbury Review

“Each section [of The Book of the Dead Man] demonstrates Bell’s keen eye for the world and ear for the rhythms of language… This collection will fascinate those interested in seeing what language can sometimes do in the hands of an expert.” —Booklist

“[The Book of the Dead Man] is a body of poetry as sacramental as any ancient religious text, one whose wisdoms are deeply metaphysical and resolutely spiritual.” —David St. John, Bookpeople

“There’s a time in every writer’s development when he must, if he wants to grow, abandon the comfortable familiar ground he has been exploring and ford the river into the unknown. Marvin Bell has done that, he is out there now, over the edge, beyond the pale… Marvin Bell has transformed himself as a poet, and the results are nothing short of amazing… This is a breakthrough book that stretches the limits of the possible.” —Anthony Brandt, East Hampton Star

“In The Book of the Dead Man, Bell’s verbal acrobatics are so daring, his originality so evident, and his ambition so large… [The Book of the Dead Man] has non-stop brilliance, wit, and lyricism, as well as true cumulative grandeur. It is jam-packed with marvelous images and aphoristic gems… [It] is a text for daily pleasure, where wisdom takes its most delightful form: surprise and illumination… The Book of the Dead Man, in its drama, debate, and consecration, reaches farther for, and expresses far more of, the ineffable than most books of contemporary poetry.” —Alane Rollings, Great River Review

“A provocative suite of poetry… Bell’s appetite for life is intense–he crusades for participation, and rejects mere observation.” —The Olympian

“For sheer kinetic fury and delight, The Book of the Dead Man is irresistible… The overall effect is exhilarating, literally: exhuming hilarity from the unlikeliest places, Bell deftly walks the line between comedy and wisdom, profundity and wit.” —Kevin Craft, Plum Review

“Marvin Bell, long one of our strongest poets, has fashioned a dazzling linguistic Chinese box, at once alluring and elusive… This is the work of an accomplished poet whose engagement with being matches his gifts… Bell’s ‘Dead Man’ voice gets into you… It connects you to strange places, and you don’t know if you ‘re coming back, or want to. It won’t put you down.” —Stan Sanvel Rubin, Prairie Schooner

“Marvin Bell’s ninth book of poetry produces powerful effects through its use of refrain and incantation in its exploration of what it means to write and to live.” —Magill Book Reviews

“The Book of the Dead Man is a far-reaching poetic and philosophical exploration of the creative imagination. [It] is exhilarating and at times very funny… Again and again the lines pop open like lights.” —Writers Northwest