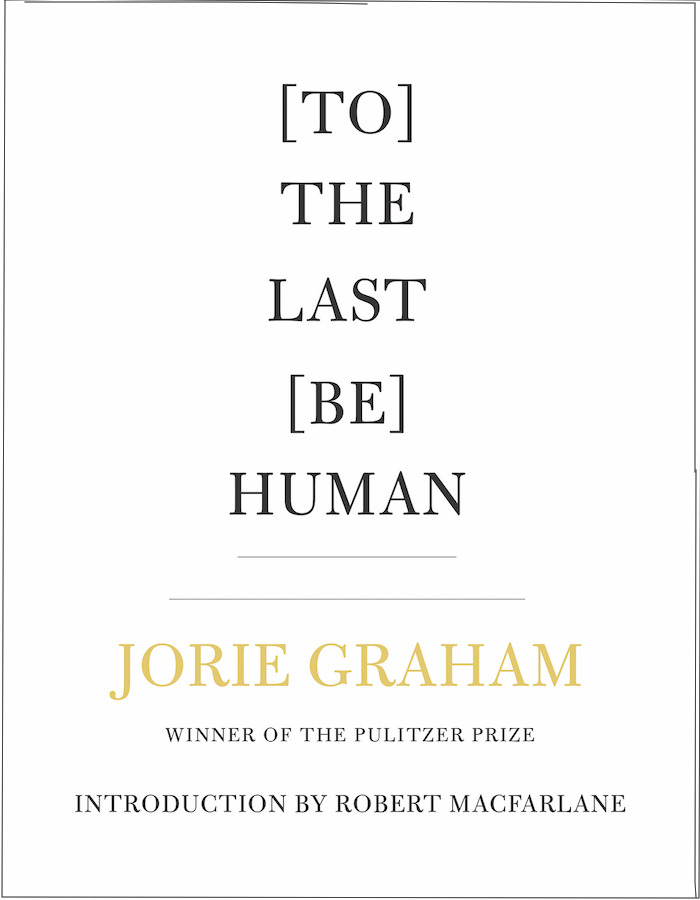 ​​[To] The Last [Be] Human collects four extraordinary poetry books—Sea Change, Place, Fast, and Runaway—by Pulitzer Prize winner Jorie Graham, presenting a body of work that stands as a “lyric record” of the calamitous decades that began the twenty-first century.

From the introduction by Robert Macfarlane:

This glittering, teeming Anthropocene journal is…rife with hope and raw with loss, lush and sparse, hard to parse and hugely powerful to experience. As these poems face our planet’s deep-time future, their shadows are cast by the long light of the will-have-been. Made of more durable materials than granite and concrete, their tasks are of record as well as of warning: to preserve what it felt like to be a human in these accelerated years when “the future / takes shape / too quickly.”…To read these four books in a single volume is to experience vastly complex patterns forming and reforming in mind, eye, and ear. These poems sing within themselves, between one another, and across collections, and the song that joins them all is uttered simply in the first lines of the last poem of the last book:

said it one day

Outside the window this morning, I reach to it, the newest
extension, here at second story, of the wisteria vine—
the tenth summer’s growth,
the August 13th portion of,
the rootball planted when still
the mother of a new child,
one almost tired-looking very silent out-arriving
tendril—what kind of energy is this in my hands,
this tress of glucose and watery scribbling—something which cannot reach
conclusion, my open palm just under it,
the outermost question being asked me by the world today—
it is weak it is exactly the right weakness—
we have other plans for your life says the world—
wind coming from below with the summery tick in it,
where it rounds and tucks-up from fullness where it allows one to hear
the rattling in the millions of now-drying seedpods
hanging in the trees off the walls under the hedges,
every leaf has other plans for you say the minutes also the seconds also the tiniest
fractions of whatever atoms make this a hot breezeless day,
in which what regards the soul is what it has given back
(when the sky is torn)(when the seas are poured forth)
the wisteria in my hand: who made it, who made it right,
what does it know of the day of reckoning, is today its day—
I could pull it, my vine, down, I could rip it out—still
no day of reckoning—the day it is said when no soul
can help another—each is alone—the unseen will say do not hoard me—
do not—as I hold its tether in the morning-light slant—
as the horizon does not seem to hoard the unseen—
so also the ideas are not emptied, look I am holding one—
shall we say that this instant is the end of time
where I raise my hand into the advancing morning
where the dawn-cool lifts to let the stillness of midday be seen
here underneath these low-flowing mists
which all the long time are still and waiting
for that one heat that will not change its face,
even when the horsemen ride up and it is time, and the face of the heat
stays, shimmers-stays, and the knives of the day turn blade-out
in the long corridor of noon which comes looking for this tendril—
and I hold it tight to the stone
as I bring the string round it
not to crush the sucrose and glucose in it but still
to hold it back that the as yet unformed blossoms
that would channel up it might channel up it
coming finally to spawn in long grapelike drooping
which the bees next month—what is that—will come to inhabit,
a slowness which is exactly the right slowness,
and I tell you I can feel in it that one crisp thought
which I must find a way to fix
upon this wall, driving a nail in now, and then a length of string,
around which to wrap this new growth, for it to cling to and surpass
so that next week when I look again it will have woven round its few more times
and grown hairy in its clinging and gotten to a new length
which we will be called upon to tie back, new knot, new extension,
to the next-on nail yet further up
on what remains on what’s left of this wall.

Jorie Graham was born in New York City in 1950. She was raised in Rome, Italy and educated in French schools. She studied philosophy at the Sorbonne in Paris before attending New York University as an undergraduate, where she studied filmmaking. She received an MFA in poetry from the University of Iowa. Graham is the author of 14 collections of poetry, most recently Runaway (Ecco 2020), Fast (Ecco 2017), PLACE (Ecco 2012), Sea Change (Ecco, 2008) and The Dream of the Unified Field: Selected Poems 1974-1994, which won … 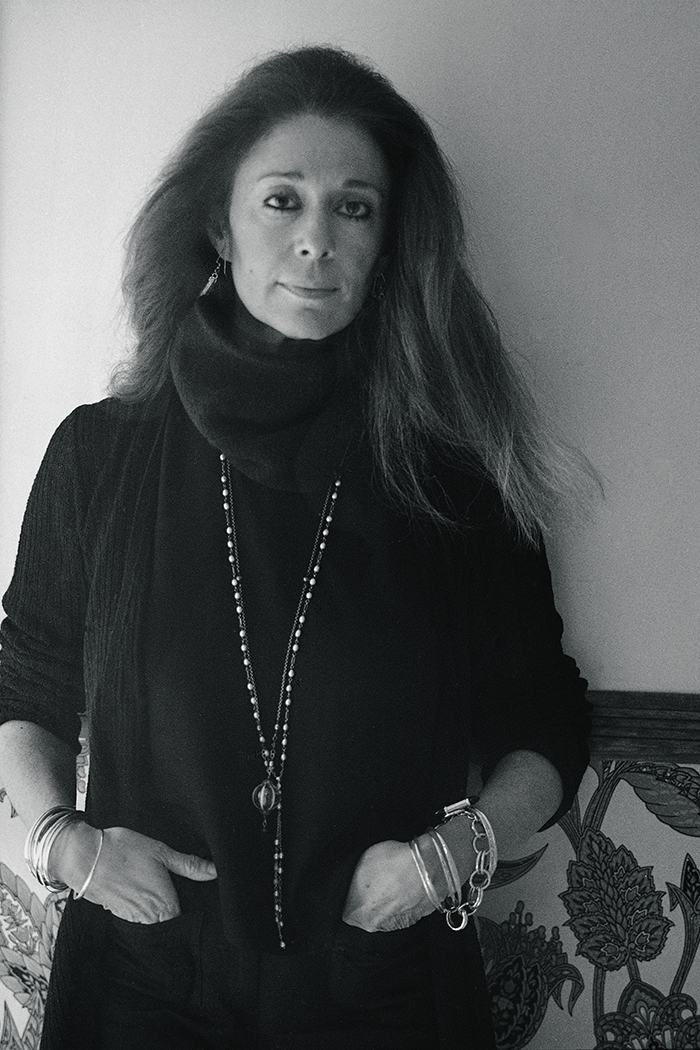 “Collecting Graham’s four stellar eco-poetic volumes, this searing and sensitive portrait of environmental contingency is as formally ambitious as it is captivating and wise. As Robert Macfarlane aptly writes in his beautiful introduction, the task of these poems is one ‘of record as well as of warning: to preserve what it felt like to be a human in these accelerated years when “the future / takes shape / too quickly.”’. . . To hold these volumes together is to have proof of Graham’s unmatched powers and to reckon with the resilience the present age demands.”—Publishers Weekly, starred review

“Why think, why write, why break the silence? I have wondered sometimes if global warming makes our own deaths feel more real, as though threats to civilization were an overdeath, as though we had to die twice. But if ‘the synthetic materials last forever,’ as Graham writes in ‘Deep Water Trawling’ (our plastics are destined to outlive our species), there is also a sense in which our work lasts forever. ‘What the lips just inconceivably apart can make,’ she wrote in ‘The End of Beauty,’ ‘cannot then, ever again, be uncreated.’” —The New York Times

“Four of Graham’s seminal works are collected and serve as a lyric testament to the poet’s writing on climate change and loss, while also celebrating the beauty and gifts of the world.”—Publishers Weekly Fall Announcements Top Ten

“Jorie Graham faces the future anguished but unblinking in this magnificent collection of her four most recent books. . . . Their importance goes beyond the literary. . . . She is weathervane, sentinel, about-to-be lost soul. What makes her work required reading is her readiness to go where angels fear to write, to do the terrifying work of visualizing the future. . . . At 72, Graham is writing for her life, and ours.” —The Guardian

“This collection gives the reader the sensation of everything happening at once, an acceleration so complete that it feels like the apocalyptic end has already arrived. . . . To go about daily life, I am suspended between resignation and activism, and engage in too little of the latter. Graham’s tetralogy gives the reader a different possibility: adaptation and radical witness. Her language and poetic structure adapt to her changing world and reality, and never succumbs to denial.” —The Rumpus

If readers imagine this book, as Graham does, as an artifact to be ‘dug up from rubble in the future,’ it maintains value for later readers from distant generations or civilizations. In this sense, Graham’s depiction of a world in the midst of its own ruin serves less as an antidote for impending devastation—it’s too late for that—than as a minority report on our humanistic response to it, one that might persist, as Macfarlane says, across ‘the long light of the will-have-been,’ even if we’ve failed to correct the course of our environmental history.”—Los Angeles Review of Books

“A monumental exploration of consciousness in an age of ecological, political, and existential crisis.”—New Yorker, Best Books of 2022