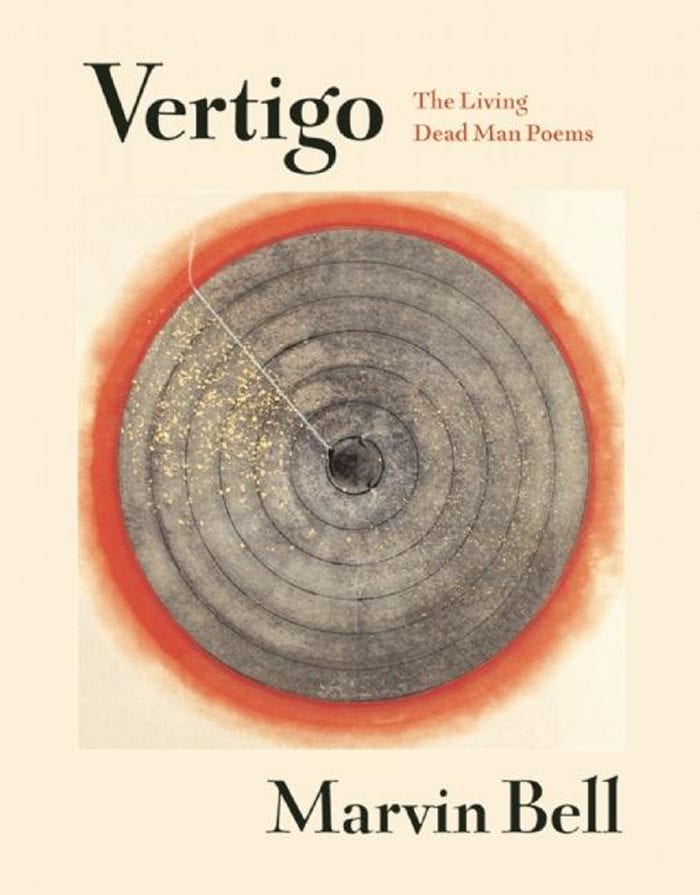 The Dead Man returns in Vertigo, Marvin Bell’s latest vibrant and provocative collection. A master of the surreal yet everyday, Bell created his everyman—a character unlike any other in American poetry—in the late 1980s and has continued to improvise on the life of the Dead Man, looking ahead while grappling with “the beginning, when mountains, canyons and seas were new, / before the moon had eyes, before paper, before belief.” The Dead Man is an overarching consciousness that stands witness to violence and political turmoil, celebrates daily joys, and challenges the scope of human knowledge. Bell’s uninhibited imagination and powerful command of language are at their best in Vertigo.

The Book of the Dead Man (Light Skeleton)

Live as if you were already dead.
1. About the Dead Man and the Light Skeleton
What if the dead man were a skeleton with wings?
Black and white, an inflatable skin without blood, no gristle, no
spiky relays, no stretchy tendons.
Picture him having shed his inner organs.
He is light now, he can hover, he can temper your fear with a sense
of floating.
There is, on the one hand, a bucket of heavy innards, and on the
other, there is the unexpected lightness of the dead man.
He enters in a whiteness more white than white, a doorway to
the sun.
Only look up to see him.
It seems he entered your consciousness without tripping the alarm.
He moved past the watchdogs, who remain silent.
It is a whiteness more white than a cessation of thought.
2. More About the Dead Man and the Light Skeleton
The butterfly was too small, the hummingbird too quick, the
nightingale too rare, it took the dead man.
It was a blinding light, a white glass to the past, a life in midair.
From the sun spreading, from cinders flying, from the whistle of
skeleton bones, the dead man may enter.
As from a line of gull song screaming, he may suddenly beach.
From a ripple back of the bricks, from a wisp on high, from the
poppies puckering, from unwavering resolve, he may
be born.
What if he comes bearing the rib cage of starvation and a cape?
He may enter as an irrational surge of current.
He may be too large for the space allotted him, and take the air.
He may be the parade balloon you hoped had escaped.
The dead man adds bounce to the hours, and he stays up.

“[The poems in Vertigo] are by turns cosmic and earthy, dubious and faithful, determined and resigned. Deeply funny and comically humane, they remind us that life in this world embraces contraries.” —Pleiades

“Marvin Bell’s Dead Man poems should close out any anthology of the twentieth century and open any anthology of this new century’s work. They change the game. They insist that we pay a new and different kind of attention.” —Georgia Review

“With the rhythms of a modern-day prophet, Bell creates a universe of one, recasting Whitman’s ‘Song of Myself’ to mirror the present age.” —Publishers Weekly